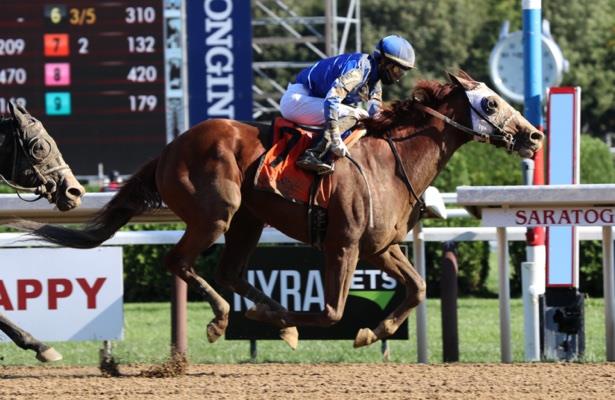 Godolphin homebred Mystic Guide, last out winner of the Jim Dandy (G2) Sept. 5, remains under consideration for the 145th Preakness Stakes (G1) Oct. 3 at Pimlico Race Course after returning to the work tab with a half-mile breeze Saturday morning.

“[Tate] broke his maiden by seven, so he was a good workmate this morning,” trainer Mike Stidham said. “Mystic Guide sat just off of him breaking from the half-mile pole and he came to him in the stretch and they finished together, which was the planned work. Then he had a real solid gallop out … in 1:01 and 1. It was just what we were looking for and we’re very pleased with where we’re at with him right now.”

The work was the first for Mystic Guide since coming from off the pace for a three-quarter-length victory in the 1 1/8-mile Jim Dandy. The sophomore son of Hall of Famer Ghostzapper has two wins, a second and two thirds from five career starts, all this year, including a third in the Peter Pan (G3) July 16, also at Saratoga.

“He came out of his last race in good order. He’s galloped up until today,” Stidham said. “He’s been training very well and this morning’s half-mile work went just as we planned. We have the Preakness as a consideration. We’re not 100 percent committed at this time, but we are looking at it. He’ll have another work next weekend in preparation if we do run in the Preakness.”

The 1 3/16-mile Preakness would be the longest race to date for Mystic Guide, out of the A.P. Indy mare Music Note, who has steadily stretched out from six furlongs to 1 1/16 miles to the 1 1/8 miles of his last two starts. The Jim Dandy marked the first time he raced in blinkers.

“He’s bred to run a mile and a quarter and further than that,” Stidham said. “As he ran last time going a mile and an eighth when we added the blinkers he was plenty ready for the added distance, and further distance is going to even help more.”

Based the past four summers at Fair Hill, Stidham has never started a horse in the Preakness. This year’s race is being run for the first time as the final jewel in a refashioned Triple Crown as well as a “Win and You’re In” qualifier for the Breeders’ Cup Classic (G1) Nov. 7 at Keeneland.

“He was a horse that was a little bit behind as a 2-year-old. He had some maturity issues with just some minor, niggling things that slowed him down,” Stidham said. “We didn’t get him until he was close to being a 3-year-old so he made his first start at the Fair Grounds. He ran in a sprint race which we knew was more or less just an educational race.

“He ran well that day and when we ran him back two turns he was very impressive, drew off impressively in that race,” he added. “He was a little bit of a late developer, then when COVID hit and they changed the dates for all these races in the Triple Crown, it gave us a chance and gave us an opportunity to a part of it. We’re happy to be in consideration for the Preakness.”

The Preakness is the centerpiece of a blockbuster weekend of 16 stakes, nine graded, worth $3.35 million in purses Oct. 1-3 at Pimlico that includes the 96th running of the $250,000 Black-Eyed Susan (G2), one of the country’s most prestigious races for 3-year-old fillies, this year on the Preakness undercard.