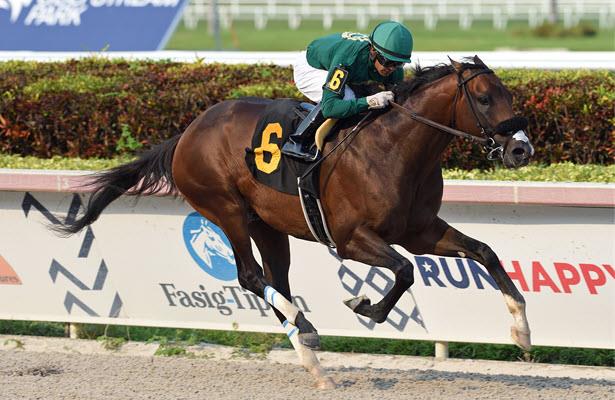 Grupo 7C Stable’s Jesus’ Team, third in the Jim Dandy (G2) and fourth in the Haskell (G1), will be supplemented to the 145th Preakness Stakes (G1), to be run Oct. 3 at Pimlico Race Course.

The decision was made, said trainer Jose D’Angelo, after the 3-year-old son of Tapiture breezed a half-mile Saturday at Monmouth Park in :47.80.

“I explained to the owner the races [available] to him and he thinks the best decision was to run in the Preakness,” D’Angelo said. "He worked four furlongs very well. He’s very, very good right now, and the Preakness is a great race for us.”

D’Angelo said Jesus’ Team, named after the owner’s son, would work again next weekend at Monmouth before heading to Pimlico.

Jesus’ Team broke his maiden in a $32,000 claiming event March 18 at Gulfstream Park and then won a claiming race May 8 before finishing second behind Tampa Bay Derby (G2) runner-up Sole Volante by three-quarters of a length June 10 at Gulfstream in an allowance optional claiming event. The colt then headed to Monmouth, finishing fourth, beaten 7 2/3 lengths, by eventual Kentucky Derby (G1) winner Authentic, in the Haskell, second in the Pegasus Stakes, and then finishing second at Saratoga Sept. 5 in the Jim Dandy to Mystic Guide.

“In all his races, and in all his works, I think he runs his best race last to front … only one move,” D’Angelo said. “I think that will be his best way in the Preakness.”

D’Angelo, a native of Venezuela, is the son of another Gulfstream-based trainer, Francisco D’Angelo. Francisco, a champion trainer in Venezuela, came to the U.S. in 2015. Jose worked for his father before saddling his first winner in July 2019.