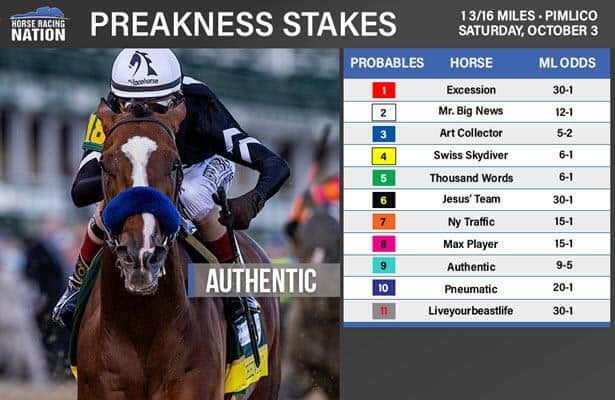 In the least typical of Triple Crown seasons, there is at least a little bit of normal in the main storyline for Saturday’s 145th running of the $1 million Preakness Stakes. The Kentucky Derby winner is the favorite.

The Preakness draw took place Monday afternoon at Pimlico. A replay of the Preakness Stakes post draw can be viewed here.

BET the Preakness & Get a $200 Bonus from NYRABets!

Made a 9-5 favorite on the morning line after being bet to 3-2 in futures markets, Authentic drew post 9 in the field of 11 and will race to keep part of Hall of Fame trainer Bob Baffert’s record perfect. Silver Charm, Real Quiet, War Emblem, American Pharoah and Justify have built him a 5-for-5 record whenever he has tried to complete the Kentucky Derby-Preakness double.

“That’s good,” Baffert said from Kentucky after seeing the results of the draw. “I didn’t want the 1 or the 11. He breaks weird when he’s on the outside.”

[See FREE Past Performances for the Preakness Stakes]

Trying to add to his record seven Preakness training wins, Baffert will have both Authentic and Thousand Words in Saturday’s final race of this year’s Triple Crown. Rebounding from his 11th-hour scratch from the Derby after he tumbled in the paddock, Thousand Words was made the co-third choice on the morning line at 6-1. He will add blinkers for the Preakness.

“It’s a little blinker, it’s not a lot of blinker,” Baffert said by phone from Kentucky. “Just enough to keep him focused. He worked better with them the other day.”

Authentic himself had a 47.6-second breeze over four furlongs at Churchill Downs on Monday. Both the horses and Baffert will fly to Baltimore on Tuesday.

Back after he suffered a minor leg injury that took him out of the Kentucky Derby, Blue Grass (G2) and Ellis Park Derby winner Art Collector drew post 3 and was installed at 5-2 odds by Pimlico track handicapper Keith Fuestle.

“I’m happy,” trainer Tommy Drury said Monday in a text message. “I think we are tactical enough that we will be fine.”

Swiss Skydiver drew post 4 and carries 6-1 odds as the first filly to go in the Preakness since Ria Antonia finished 10th in 2014. Trained by Kenny McPeek, she could be the first female horse to win the race since Rachel Alexandra in 2009 and only the second since Nellie Morse in 1924.

Country Grammer was a late withdrawal by trainer Chad Brown before the entries.

The Preakness field, with post positions, odds and riding assignments, can be viewed below:

1. Excession, 30-1 (Steve Asmussen, Sheldon Russell) He ran a huge second at a big price to the undefeated Nadal in the Rebel Stakes, but has not been seen since that big effort. A repeat of that race gives him a fighting chance, but his prior form left a lot to be desired.

2. Mr. Big News, 12-1 (Bret Calhoun/Gabriel Saez): This son of Giant's Causeway enjoys causing chaos on the toteboard. He won the Oaklawn Stakes and was third in the Kentucky Derby at over 40-1 both times. He will be be a price again in the Preakness, but will be far less than 40-1 on Saturday.

3. Art Collector, 5-2 (Tommy Drury Jr., Brian Hernandez Jr.) The deserving second choice had to be withdrawn from Derby consideration with a minor injury, but is ready to roll in the Preakness. He has the tactical speed to keep Authentic in his sights early and the Blue Grass winner may even try to wrestle the early lead away from the Derby winner.

4. Swiss Skydiver, 6-1 (Kenny McPeek, Robby Albarado): This talented filly romped home going 1-1/4 miles in the Alabama Stakes, before running second in the Kentucky Oaks. She was second in the Blue Grass behind Art Collector in her only try against males.

5. Thousand Words, 6-1 (Bob Baffert/Florent Geroux): The 'other' Baffert flipped in the Paddock before the Kentucky Derby and was a late scratch. Prior to the Derby, he defeated Honor A. P. in the Shared Belief. Honor A. P. ran a strong troubled fourth in the Derby, which flattered this colt.

6. Jesus’ Team, 30-1 (José D’Angelo, Jevian Toledo) Much like Max Player, this colt always shows up with an honest effort, but settles for minor awards. He was fourth in the Haskell, second in the Pegasus and third in the Jim Dandy. He is familiar with many of these rivals but would need to improve to get a piece of the Preakness.

7. Ny Traffic, 15-1 (Saffie Joseph Jr./Horacio Karamanos): He had a rough trip in the Derby that left him with many cuts, but he is healed up and is ready to go. Prior to the Derby, he closed with a rush to be second to Authentic in the Haskell, a result that looks better each day.

8. Max Player, 15-1 (Steve Asmussen, Paco López): The late-running colt has made a habit of cashing checks in big races. He has run third in the Travers and Belmont and was fifth in the Kentucky Derby in his first start for Steve Asmussen. This honest son of Honor Code is likely looking at another minor award in the Preakness.

9. Authentic, 9-5 (Bob Baffert/John Velazquez): The Kentucky Derby winner has been defeated only once in six starts and proved he can handle the classic distances with his game front-running score over favored Tiz the Law. The morning-line favorite will look to give Bob Baffert his eighth Preakness score.

10. Pneumatic, 20-1 (Steve Asmussen, Joe Bravo): He was the fourth-place finisher in the Belmont Stakes prior to a strong win in the Pegasus Stakes at Monmouth. He is one of three in here for Steve Asmussen and has been pointing to this race since having his picture taken in the Pegasus.

11. Liveyourbeastlife, 30-1 (Jorge Abreu, Trevor McCarthy) brings an improving pattern into the Preakness and is coming off his best effort yet, a second place finish in the Jim Dandy. He will be tested for class in Saturday's Preakness Stakes.