Preakness 2018 news: Tenfold could be Belmont Stakes-bound, too 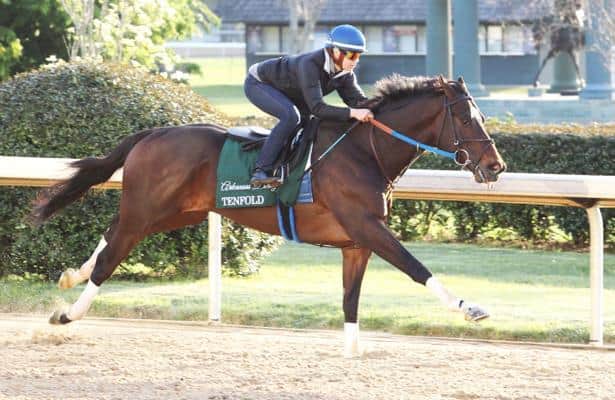 Tenfold, a 2018 Preakness Stakes contender who arrived Tuesday afternoon for the race, is by the Steve Asmussen-trained 2007 Preakness Stakes winner and two-time Horse of the Year Curlin. He's also out of a mare sired by Tapit, the Gainesway Farm stallion who ranks among the best studs in the world and whom Winchell Thoroughbreds raced and retains a half-interest.

In this case, there’s not too much of a good thing.

So even though owner Ron Winchell has a veritable Tapit factory, with about 15 daughters of Tapit in his broodmare band – 11 of them homebreds – he and bloodstock manager David Fiske are always on the lookout for more. They bought Temptress, Tenfold’s mom, as a yearling for $190,000 in 2011.

“We were looking at a lot of Tapits at the time, trying to assess what they looked like and whatever,” Fiske said. “Every once in a while we’d stumble across one we liked and thought she might fit the bill. A lot of them are good looking and it’s just hard to walk away from one. You know a lot about the stallion, you look at a lot of his offspring. We probably look at more Tapits than foals by any other stallion. She compared pretty favorably with the ones we’d been looking at.”

Temptress won an off-the-turf allowance race in New Orleans in her last start and retired without racing in a stakes.

“She’s a great big mare,” Fiske said. “Some of those Tapit mares can get big. I think she had an ankle that bothered her. She looked like she had some talent, so we decided to breed her…. At one point we tried to buy part of Curlin. We thought he had a lot of upside. So we figured, shoot, if we were willing to buy part of him, I guess we’d be willing to breed to him. Temptress’ number came up.”

Ask about expectations for Tenfold, Fiske said cheerfully, “The same expectation as all of our foals: When they’re born, they’re all Derby winners until they prove that they’re not. He was always a nice foal, always correct, had a lot of substance. Of course, the mare has a lot of substance, and Curlin. He looked pretty much like he was supposed to.

“I don’t know if there is a 3-year-old around that is better bred for the Belmont than he is,” he added. “He’s by a horse that lost the Belmont by a nostril and is one of the top sires in the country. And he’s out of mare by arguably the best Belmont sire ever.” (Tapit has sired three of the past four Belmont Stakes winners in Tapwrit, the Asmussen-trained Creator and Tonalist.)

Tenfold did not race at 2 because of nagging baby issues, Fiske said. He won his first two starts, both at 1 1/16 miles at Oaklawn, then was fifth, beaten a total of 4 1/2 lengths under Hall of Famer Victor Espinoza, in the Arkansas Derby (G1).

“He was supposed to be much closer to the lead than he was,” Fiske said. “As it turned out, it was a pretty pedestrian pace. I don’t think it was beyond his scope to have been up on the lead. Then it was hard to make up any ground in the stretch. So that’s that.”

The 1 3/16-mile Preakness is not a prep for the Belmont, Fiske said, laughing, “Actually I’ve told people that as a joke.”

He added more seriously of trying to defeat Kentucky Derby winner Justify: “It’s a tall order. I think Steve’s already said that we’ll get some read on where our guy fits in the universe of 3-year-old colts this year. Typically, you don’t run away from a race that has one standout. That’s not to pooh-pooh last year’s 2-year-old champion (Derby runner-up Good Magic). But it would be OK just to get some black type (by finishing in the top three) in a classic. It’s mostly the timing from the Arkansas Derby, and I think he’s blossomed a bit since the Arkansas Derby.”

Calumet Farm’s Bravazo and Robert Baker and William Mack’s Sporting Chance, will add to Lukas’ record of Preakness starters, which stands at 41. This will be Lukas’ 28th Preakness, a race he has won six times. He is tied with Bob Baffert for second on the career wins list, one behind the 19th century standout Robert Wyndham Walden.

Lukas said he stepped away from the Preakness tradition of saddling the horses on the turf course in the 1980s. Bravazo, sixth in the Kentucky Derby (G1) and Sporting Chance, fourth in the Pat Day Mile (G3) in their most recent starts, paid a visit to Pimlico’s indoor paddock.

When he arrived from Kentucky with the horses Monday, Lukas said they would have light morning exercise because they were running back in two weeks. On Wednesday, they jogged one lap of the track and galloped clockwise – the reverse of the way races are run – a second lap.

“We didn’t do a lot with that track the way it was,” he said. “If we’re going to do something serious on that racetrack we’ve got to get paid for it.”

Sporting Chance, a son of Hall of Famer Tiznow, was purchased for $575,000 as a yearling and was a formidable runner as a 2-year-old, winning the Hopeful (G1) at Saratoga. Surgery to remove a knee chip ended his 2017 season. The Preakness will be his fifth race, all graded stakes, this season. In the Pat Day Mile on the Derby undercard, he had a troubled trip under Luis Contreras and was 12 lengths back midway through the race. Contreras moves to Bravazo, a Calumet homebred, while Luis Saez takes over on Sporting Chance.

“I think he’s going to have to show speed, like everybody,” Lukas said of Sporting Chance. “In an eight-horse field you’re just going to have to turn the jock loose and see. But he’s got tactical speed. Let’s see how he handles it. I think he likes the mud.”

Sporting Chance did win the Hopeful on a track rated “good” and was third in the mud in the Southwest (G3).

Tampa Bay Derby (G2) winner Quip galloped a mile at Keeneland Wednesday morning before being loaded onto a van bound for Louisville International Airport for a scheduled flight to Baltimore in the company of Kentucky Derby winner Justify and Lone Sailor, a Preakness contender who finished eighth in the Derby.

Trainer Rodolphe Brisset has yet to firm up Quip’s training schedule for his start in the Preakness.

“I have no idea. I have to take a good look at the track. It sounds like the weather hasn’t been nice over there,” said Brisset before boarding a plane Wednesday morning.

Florent Geroux has the return mount aboard the son of Distorted Humor, who is owned by WinStar Farm, China Horse Club and SF Racing.

Horses to Watch: Cezanne is back – and better than ever
In this biweekly series, racing analyst Keeler Joh...