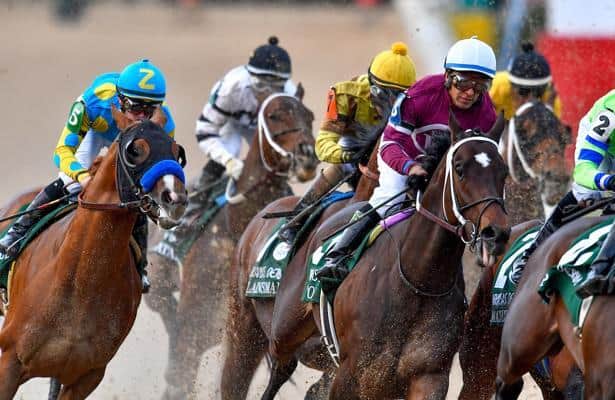 Steve Asmussen-trained Tenfold, coming into the 2018 Preakness Stakes off a fifth-place finish in the Arkansas Derby in his third start, was the first horse on the soggy Pimlico racetrack at 5:30 Thursday morning, accompanied by assistant trainer Scott Blasi on his pony.

They walked back around the outside of the track surface to the five-eighths pole on the backside, with Tenfold turning around and galloping what Blasi termed “an easy mile” under exercise rider Angel Garcia. Winchell Thoroughbreds’ homebred was to school in the paddock during the races Thursday and visit the starting gate Friday morning.

Tenfold looked fetching while cooling out afterward in a snazzy camouflage blanket promoting Homes for Our Troops, a charity that builds mortgage-free homes that are specially adapted for severely injured military veterans. The venture is a collaboration with Sentient Jet, which donates funding and marketing resources to Homes for Our Troops, and Tenfold’s owner Ron Winchell.

Asked if Tenfold was in disguise in camo to sneak up on the opposition, Blasi, whose son, Blayne Prochaska, is in the National Guard, said, “I hope so,” adding, “It’s a great cause, Home for Our Troops. It’s very fun to be a part of it.”

Among those visiting Tenfold Thursday was 36-year-old Army veteran Brandon Huff, who lost his left leg to a roadside bomb in Iraq. Homes for Our Troops is building Huff a home in Maryland. Huff, two other wounded veterans and Gen. Richard Cody (Ret.), board chairman of Homes for Our Troops, will be guests of the Maryland Jockey Club at the Preakness.

“I was brought back to the States within 72 hours,” Huff said. “Somewhere in there I had a stroke. So I was learning to walk again on a new leg when I couldn’t move the left side of my body. The stroke is probably more complicated than the rest of it.”

Later, Huff and his wife, Netta, got up close and personal with the amiable Tenfold, petting his head while talking with Blasi, who was holding the colt.

“It’s really exciting. I’m really just so overwhelmed by everything,” Huff said. “It still hasn’t fully set in that we’re getting the house.”

The camouflage blanket actually started at the Kentucky Derby with Tenfold’s stablemate Combatant.

Lukas: Justify, Good Magic Will be There Again

“He’s the best horse. It’s that simple. He looks terrific. He’s doing well. I watched him all week. He’s going to be very, very hard to handle,’’ Lukas said.

If it’s a rainy day, like it was on Derby Day, Lukas says he doesn’t think the outcome will be any different than it was two weeks ago when Justify, Saturday’s 1-2 morning-line favorite, finished ahead of Good Magic, rated second in the Preakness morning line at 3-1.

“I think the same horses that were up in front will be there again,’’ he said. “I hope to be a little closer with both of mine but we may not be able to do that.

Lukas sent Bravazo out to the track Thursday morning for some light exercise, while Sporting Chance, walked the shedrow at the stakes barn. Lukas said he plans to have both of them out on the track Friday morning.

Accompanied to the track by a pony at 6:30 a.m., exercise rider Maurice Sanchez jogged Lone Sailor clockwise about three-quarters of mile to the paddock entrance with the intention of schooling, only to find a barrier preventing entry to the paddock under the grandstand. Sanchez then turned Lone Sailor around and executed the planned 1 1/2 miles gallop.

“That’s our regular gallop,” Sanchez said. “Mr. Amoss said to just give him a good mile and let him check out the racetrack…. He hit it good; he was striding over it big time. He liked it over that funny going.”

Trainer Tom Amoss was to arrive in Baltimore from Louisville later Thursday morning. After Wednesday evening’s post-position draw, in which Lone Sailor drew Post 2, he called the track a considerable “unknown.”

“Is it going to be good down the inside? A few paths off?” he said, adding of 2016 Preakness winner Exaggerator rolling to victory in the slop on the rail, “I think back to Exaggerator’s Preakness, and Kent Desormeaux’s comments after the race that he was on the best part of the racetrack. That is on my mind. We will definitely pay attention to that during the course of the day. I think everybody else will, too.”

Lone Sailor finished eighth in the Kentucky Derby, but his trouble had nothing to do with the sloppy track at Churchill Downs but rather getting held up in traffic. Even though he said he ruined a $1,000 jacket from getting soaked, G M B Racing manager Greg Bensel said he welcomed the rain then and for Saturday.

“He won by 11 at Saratoga on the wet,” said Bensel. “Let it rain. When we were sitting in our suite on Kentucky Derby Day and we saw a slight break in the weather, I got depressed. I was like, ‘No! Rain! Rain! Don’t quit now!’”