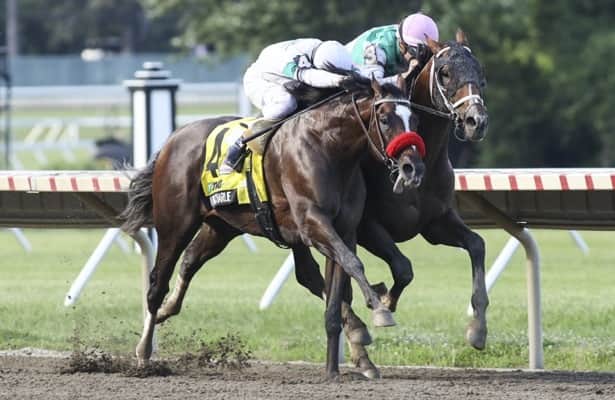 The New Jersey Racing Commission has suspended jockey Flavien Prat for seven days for his ride on Hot Rod Charlie in the Haskell Stakes (G1).

During the race, Hot Rod Charlie, under a vigorous hand ride from Prat that failed to straighten him, came in on Midnight Bourbon and caused them to clip heels. Midnight Bourbon nearly went down while unseating López, escaped serious injury.

Hot Rod Charlie crossed the finish line first by a nose but was disqualified, giving the victory to Mandaloun.

According to the ruling, issued Aug. 1, Prat "failed to make a reasonable effort to keep his horse from drifting in past the 1/8-mile pole."

His suspension is in effect from Sept. 7 to Sept. 13, according to the ruling. Those dates coincide with a break in racing in California, after Del Mar closes but before Santa Anita reopens.

In a text message to Horse Racing Nation, Prat declined to comment, other than to say, "I will take the days and move on!"

Prat and Terry Meyocks, president of the Jockeys' Guild, blamed the incident on New Jersey's prohibition of using a crop except for safety reasons. (See more here.)

“If I could have hit him just one time left-handed, we would have been just fine,” he told Blood-Horse after the race.