Practical Joke and Syndergaard lead a field of six in Champagne 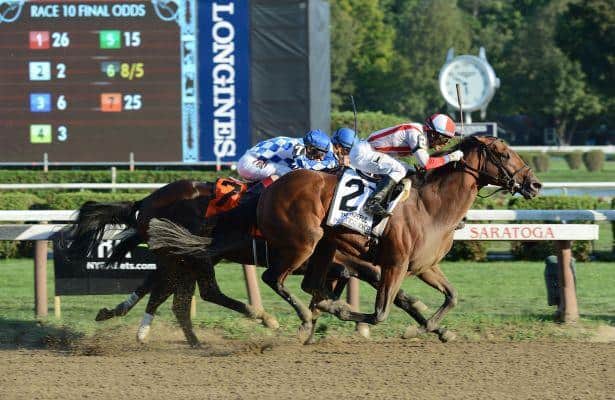 Two of the most highly regarded graduates from this summer's Saratoga meet are set to square off for the first time on Saturday, as Grade 1 Hopeful winner Practical Joke and Funny Cide victor Syndergaard lead a field of six 2-year-olds in the Grade 1, $500,000 Champagne at Belmont Park.

As part of the Breeders' Cup Challenge "Win and You're In" series, the one-mile Champagne carries an all-fees-paid berth into the $2 million Sentient Jet Juvenile on November 5 at Santa Anita Park. Carded as Race 8, the Champagne rounds out a stakes-packed "Super Saturday," joined by three Grade 1's and anchored by the Grade 1 Jockey Club Gold Cup.

The Chad Brown-trained Practical Joke, owned by Klaravich Stables and William Lawrence, broke his maiden at first asking, overcoming a troubled break to open up by five lengths under the wire on August 6 at the Spa. The bay Into Mischief colt returned in the Hopeful the following month and outkicked a pair of dueling rivals to win by a game neck.

"He's been training great since the Hopeful," Brown reported. "He has been working well since he moved to Belmont and I think added distance should only help this horse."

Joel Rosario picks up the mount aboard Practical Joke, who is set to break from the rail.

"We were very pleased," Brown said of his maiden effort. "He ran so fast I figured we'd give him some extra time since the race and just point to the Champagne. He's been training very well."

Favorable Outcome will be ridden by Javier Castellano from post 5.

Named for the New York Mets' All-Star pitcher Noah Syndergaard, the Majesticperfection colt wired his state-bred competition at the Spa in his first two starts, including an eye-catching 10 ¼-length score in the Funny Cide on a muddy and sealed track on August 26, where he earned a field-high 90 Beyer Speed Figure.

"We've been very pleased with how he's been coming up into the race," said Pletcher,  who swept the Champagne-Breeders' Cup Juvenile double with Shanghai Bobby in 2012 and Uncle Mo in 2010. "He's been impressive in his two races and just as impressive in his works since then so we're looking forward to seeing how he handles the step up in class and the stretch-out in distance. I really like what we've been seeing in the mornings."

Syndergaard will depart from post 3 with Hall of Famer John Velazquez aboard.

Pletcher will also be represented by Repole Stable's Thirst for Victory, who won his maiden debut despite a torrential downpour that ultimately forced the cancellation of the latter half of the Fourstardave card on August 13 at Saratoga.

"I thought it was a courageous effort," said Pletcher. "It was the race that was run before they cancelled the remainder of card because of the rain. The track was very heavy and in spite of that, he showed a lot of grit and determination for a first-time starter. So we'll see how he handles the step up to stakes ranks but we like what he's been doing in the mornings and we liked his first race so we'll see."

By Stay Thirsty, Thirst for Victory will depart from post 2 with jockey Manny Franco.

Rounding out the field are California invader Big Gray Rocket, a 6 ¾-length maiden winner at Del Mar for Frank Fletcher Racing Operations and Hall of Fame trainer Bob Baffert; and Mossarosa's Lookin At Blessing, a front-running maiden winner on September 11 at Belmont Park for Hall of Famer Nick Zito.