Quirky and undefeated, Post Time is a 'blast' for his rider 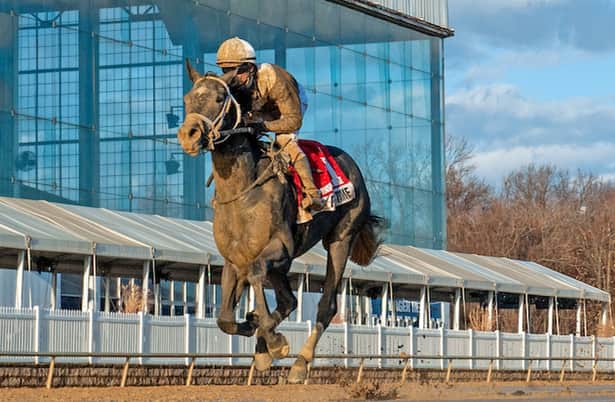 Green and quirky in his first two starts, which he won by 8 3/4 combined lengths, Post Time had his mind on business in Saturday’s $100,000 Maryland Juvenile at Laurel Park. In his stakes debut, he made a powerful last-to-first move around the far turn and kept his perfect record intact with an eye-catching 3 3/4-length triumph.

It was the third win in as many starts for Post Time ($4.00), trained by Laurel fall meet leader Brittany Russell and ridden in each of her races by Eric Camacho. The winning time was 1:23.98 over a muddy main track.

“It was a blast. He’s such a racehorse,” Camacho said. “He’s gotten better. He’s getting better with time. You’ve got to watch out for him in his next race.”

Post Time was unhurried after breaking from the rail and was last of seven as Johnyz From Albany, last out winner of the Maryland Million Nursery, posted a 22.26-second quarter-mile.

Camacho, who won 787 races from 2004 to 2016 and now exercises horses for Russell, gave Post Time his cue and the gray or roan son of Grade 1-winning multi-millionaire Frosted responded with a bold rush on the far outside to move into contention after a half in 45.81 seconds. Post Time powered through the stretch without urging from Camacho to surge past Johnyz From Albany and draw clear.

“I was next-to-last going into the turn, got him together and asked him for his best at the three-eighths pole. He circled the field, came up to Johnyz From Albany and just went right by him,” Camacho said. “I just went on with him. There was no playing around.”

Johnyz From Albany was second, 3 3/4 lengths ahead of Coffeewithchris. Tiz No Clown, Feeling Woozy, California Ghost and Tidewater completed the order of finish.