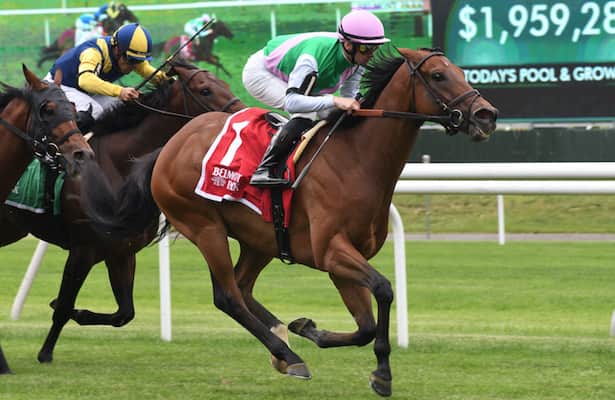 The British homebred son of Kingman was headstrong from the gate but settled down along the backstretch under Flavien Prat. He collared pacesetter Wolfie’s Dynaghost in upper stretch and was hand ridden in the final strides to the wire.

“The early portion of the race was a little slow. He had a tricky rail draw so we were trying to get him out in the clear and back in control of the race, and Flavien was able to do that effectively,” Brown said. “If the pace is slow, he’s going to tug on the bridle a bit, but we were just trying to reposition the horse.”

Masen entered the Poker off an easy score in the Seek Again on May 22 over the same surface and distance. He made his North American debut when a close second to Shirl’s Speight in the Maker’s Mark Mile (G1) in April at Keeneland.

Masen added to the list of graded-stakes-winning progeny by Kingman who have been trained by Brown, including Grade 1 winner Domestic Spending as well as Serve the King, Technical Analysis and Public Sector, who was third to Masen in the Poker.

“Most of them seem to be very willing training horses,” Brown said. “They have good turn of foot, and they’re very athletic type of horses. Although I’ve had them run on all types of ground here, they seem to appreciate firmer ground. All around, he’s a fantastic stallion.”

Masen is out of the Smart Strike mare Continental Drift, an unraced daughter of 2005 Champion Turf Mare Intercontinental. Brown had hands-on experience with Intercontinental during his tenure as an assistant to her late Hall of Fame trainer Bobby Frankel.

“She was a headstrong horse,” Brown said. “She was a tough, light-mouthed horse, but she was a brilliant racehorse.”

The Fourstardave, a Breeders’ Cup win-and-you're-in qualifier for the $2 million Breeders’ Cup Mile at Keeneland, also is likely to attract Peter Brant’s multiple Grade 1-winner Regal Glory, who most recently captured the Just a Game (G1) for Brown on Belmont Stakes Day.

“He’ll come back up to Saratoga where he was training and point towards the meet, but I’m not sure which race we’ll go to,” Brown said.

Brown had many of his top performers on Belmont’s Sunday morning work tab, including Preakness winner Early Voting, who went five furlongs in company with fellow Klaravich Stables color bearer Efficiency. The pair completed their move in 1:00.62 over the fast main track.

Early Voting, a son of second crop sire and 2017 Horse of the Year Gun Runner, earned a career-best 105 Beyer Speed Figure for his Preakness victory.

Brown indicated that the $600,000 Jim Dandy (G2) on July 30 at Saratoga and the $1 million Haskell Invitational (G1) on July 23 at Monmouth are both under consideration for his next start.

Jeff Drown’s Zandon, who is targeting the Jim Dandy, went a half-mile solo in 48.62 seconds at Belmont on Sunday. The son of New York-bred Upstart was third in the Kentucky Derby in his most recent effort.

John D. Gunther and Eurowest Bloodstock’s Pipeline went a half-mile in 48.46 seconds over the main track. The stakes-placed son of Speightstown defeated winners for the first time last out in a one mile first level allowance in April at Aqueduct, garnering a 104 Beyer for the effort.

“He had been training well so we were cautiously optimistic he would show up, and he did,” said Brown, who added that Pipeline would likely target a second-level allowance.

Following a fourth-out graduation at seven furlongs last September at Saratoga, Pipeline was a close third in the Perryville the following month at Keeneland.

Napoleonic War registered a half-mile move in 48.26 seconds over the inner turf Sunday in company with Highest Honors.

A homebred son of War Front, Napoleonic War was second to Emmanuel in the Grade Pennine Ridge (G2) on June 4 last out. He is the first progeny out of the Street Cry mare Naples Parade, whose dam Treasure Trail is a half to multiple champion and Hall of Famer Zenyatta as well as three-time Grade 1-winner Balance.

Haughty and McKulick went a half-mile in company in 49.25 over the inner turf.

Haughty, by Empire Maker, won the listed Penn Oaks on June 3 at Penn National last out in her first start of the season. Never off the board in four starts, she rounded out the trifecta in the Breeders’ Cup Juvenile Fillies Turf in November at Del Mar in her previous race. She is owned by Bradley Thoroughbreds, Belmar Racing and Breeding, Cambron Equine and Team Hanley.

Klaravich Stables’ McKulick was previously second in both the Edgewood (G2) and Regret (G3) at Churchill Downs this year. The daughter of Frankel defeated Consumer Spending in her victorious career debut last August at Saratoga.

Brown said Juddmonte’s Artorius is possible to make his next start in the restricted $135,000 Curlin on July 29 at Saratoga. The homebred son of Arrogate and first progeny out of Grade 1 winner Paulassilverlining won at second asking on June 10 at Belmont.

On Friday, Brown saddled Contemporary Art to a second-out maiden victory for celebrity chef Bobby Flay, the owner and breeder of the Dubawi filly.

“She ran super. She had always trained well and she’s a well-bred, good looking horse, so it was nice to see her advance in her second start,” Brown said. “She seems to be a stakes-caliber horse.”

Contemporary Art is out of the graded stakes winning Fastnet Rock mare Cover Song, whose dam Misty For Me was a multiple Group 1-winner for the Coolmore partners in Ireland.