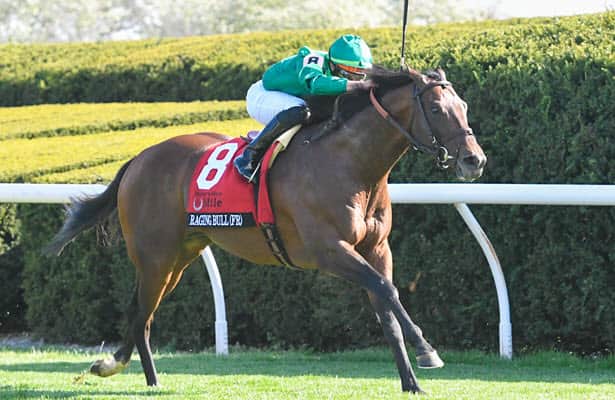 Raging Bull, who started his 2021 campaign in April with a Grade 1 victory, looks for a second straight win Sunday while enjoying class relief.

Chad Brown trains Raging Bull, who was pegged as even-money favorite for the Poker Stakes. Jockey Irad Ortiz Jr., who returned to action in recent days after a spill earlier this month, has the mount on the favorite.

Brown trains three of the Poker’s nine entrants: Raging Bull, Front Run the Fed (4-1) and Veronesi (15-1). Front Run the Fed was second last out at Belmont in the Elusive Quality Stakes, while Veronesi makes a North American debut.

Get Smokin (9-2) enters off a local victory in the Seek Again Stakes. Tell Your Daddy (8-1) was third in the Seek Again, while 2020 Jaipur Stakes (G1) heroine Oleksandra (12-1) seeks her third career graded triumph.

Belmont’s Poker Stakes serves as a precursor toward Saratoga’s graded stakes for older turf milers: the $150,000 Forbidden Apple (G3) on July 16 and the $500,000 Fourstardave Handicap (G1) on Aug. 14. The latter provides its winner fees-paid entry into the Breeders’ Cup Mile at Del Mar in November.

Related: Use these value-priced stalkers in Poker Stakes | Saratoga, Belmont, Breeders' Cup to operate at 100% capacity

Here is a look at the 2021 Poker Stakes field (trainer and jockey in parentheses) with morning-line odds:

TimeformUS’ pace projections show Raased going out to a lead under jockey Jose Ferrer, followed by Get Smokin. Favorite Raging Bull is projected to do his running late.

Courtesy of the National Thoroughbred Racing Association, here is a look at other graded stakes taking place Sunday across North America. All post times are EDT.

CYBT, Saul Gevertz, Lynn Gitomer, Mike Goetz, Michael Nentwig, and Daniel Weiner’s Neptune’s Storm leads a field of six in the American Stakes at one mile on turf at Santa Anita. Trained by Peter Miller, the 5-year-old gelding has won six races, including last year’s San Francisco Mile (G3) at Golden Gate Fields. Neptune Storm will be making his first start since finishing fourth in the Tourist Mile Stakes at Kentucky Downs last September. Flavien Prat has the mount, breaking from post three. Rave Green Racing’s 6-year-old gelding Majestic Eagle, trained by Neil Drysdale, finished second in the Daytona Stakes (G3) at Santa Anita on May 29 in his 2021 debut. Majestic Eagle will be ridden by Mario Gutierrez from post five.

Warren and Sally Benjamin’s 4-year-old California-bred Warren’s Showtime leads a wide-open field of eight fillies and mares in the Wilshire Stakes going one mile on the turf. A six-time winner for trainer Craig Lewis, Warren’s Showtime finished second in the one-mile Fran’s Valentine last time out May 6 at Santa Anita. She won last October’s Autumn Miss Stakes (G3) over the course. Juan Hernandez will ride from post five. Leggs Galore, another California-bred 4-year-old filly, owned by William Simms, defeated Warren’s Showtime in the Fran’s Valentine by three-quarters of a length. Trained by Phil D’Amato and ridden by Ricardo Gonzalez from post six, Legg’s Galore has won six of nine races, and is seeking her first graded-stakes win.

After 12 consecutive starts against Grade 1 company, Peter Brant’s Raging Bull will gain slight class relief in leading a strong hand for trainer Chad Brown, who vies for his 100th graded stakes win at Belmont Park in Saturday’s 35th running of the Grade 3, $250,000 Poker for 4-year-olds and upward.

Raging Bull, who brags an 18: 7-3-3 record, is the field’s lone millionaire, posting $1,496,750 in lifetime earnings and has registered triple-digit Beyer Speed Figures on five occasions.

The French-bred son of Dark Angel recorded a dozen straight Grade 1 appearances dating back to his victory in the Hollywood Derby in November 2018 at Del Mar. His most recent non-Grade 1 endeavor was a fifth-place finish in the Hill Prince (G2) in October 2018 at Belmont.

Raging Bull arrives off a sharp 2021 debut in the Maker’s Mark Mile (G1) on April 9 at Keeneland, where he made a sweeping move around the far turn and took advantage past the quarter-pole, powering home a two-length winner. The victory garnered a career-best 106 Beyer Speed Figure. Raging Bull also commenced his 2020 campaign with a Grade 1 victory by capturing the Shoemaker Mile last May at Santa Anita.

Brown said he had intentions of sending Raging Bull back to Santa Anita for a repeat engagement in the Shoemaker Mile.

“We had planned on going out to California, but there were some traveling complications that got in the way,” Brown said. “But we’re glad that we’re able to run him out of his own stall. It should be a good steppingstone moving forward to the Fourstardave.”

The one-mile $500,000 Fourstardave Handicap (G1), a Breeders’ Cup win-and-you're-in event, is slated for Aug. 14 at Saratoga. Raging Bull has finished a respective second and fifth in the last two editions of the Fourstardave.

Jockey Irad Ortiz Jr., who returned to action Thursday after being sidelined for two weeks with an injury, retains the mount from post 1.

Fellow Peter Brant color-bearer Veronesi, a French-bred son of Kendargent, makes his first start in North America and cuts back considerably in distance for Brown. The 5-year-old bay has not raced since September 2019 when fourth in the Prix Niel (G2) behind eventual 2020 Prix de l’Arc de Triomphe (G1) winner Sottsass.

“I think this is a good starting point for him,” Brown said. “He showed some promise overseas and unfortunately was injured. He’s come back good and strong and we’re ready to get going with him.”

Klaravich Stables’ Front Run the Fed will see an increase in ground off a second-place finish in the seven-furlong Elusive Quality on April 24 at Belmont Park. The son of Fed Biz briefly held command in the stretch run of his last effort but was gunned down in the final strides by Casa Creed, who went on to win the Jaipur (G1) on Belmont Stakes Day.

Front Run the Fed, who sports a consistent 12: 4-4-1 record, has one stakes win on his resume when capturing his stakes debut in the Better Talk Now in August 2019 at Saratoga.

“Hopefully he’ll be closer and get into good rhythm and position early on,” Brown said. “He’s a nice and versatile horse from six furlongs to a mile.”

Jockey Jose Lezcano, a four-time winner of the Poker, has the mount from post 6.

Mary Abeel Sullivan Revocable Trust’s Get Smokin arrives at the Poker in top form with three of his last five outings being stakes wins. Following a second out maiden victory in September 2019 at Belmont Park, the speedy 4-year-old son of Get Stormy acquired black type in four stakes races before notching a graded stakes victory when going gate-to-wire in the Hill Prince on October 18 over a yielding Widener turf course.

After a close fourth in the Hollywood Derby (G1) in November at Del Mar, Get Smokin began his 2021 campaign by utilizing stalking tactics to capture the Tampa Bay (G3) on Feb. 5. Last out, he won the Seek Again in frontrunning fashion while recording a career-best 99 Beyer.

“He’s just matured on his own. He’s a very nice horse,” trainer Thomas Bush said. “He’s got a big, long stride and he has a little fight in him, too. He’s got plenty of good qualities.”

Get Smokin, who is 3-for-5 at Belmont Park, has shown an affinity for the one-mile distance as well as the local turf course. He boasts a record of 9: 3-2-1 when travelling one mile.

“A mile seems to suit him pretty well,” Bush said. “We had a pretty soft pace last time. I’m not sure how it will shake out this time, but that worked out very well for him in that they didn’t go too fast up front.”

Jockey Junior Alvarado, who was aboard for both stakes victories this year, returns to the irons from post 4.

Team Valor International’s Oleksandra will try to make amends after three losses this year while seeking another triumph against males for Hall of Fame trainer Neil Drysdale. The Australian-bred daughter of Animal Kingdom last won when displaying a powerful turn of foot to win last year’s Jaipur against colts.

Jockey Joel Rosario will ride Oleksandra for the twelfth time from post 2.