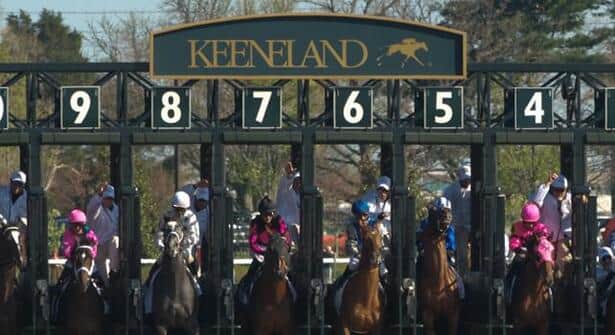 Gary and Mary West’s Poker Player rallied late for a one-length victory in the 23rd running of the $150,000 Bourbon, a race that was taken off the turf and run at 1 1/16 miles on the main track.

Because of the surface switch, the race lost its designation as a “Win and You’re In” race for the $1 million Breeders’ Cup Juvenile Turf (G1).

Trained by Wayne Catalano and ridden by Channing Hill, Poker Player covered the distance in 1:43.46 in the Bourbon. It marked the first Keeneland stakes victory for Hill.

Hill gave Poker Player a ground-saving trip near the back of the pack in the run down the backstretch as Solar Flair and Manaus dueled for the lead. Turning into the stretch, Bashart took over from the two leaders while Hill swung Poker Player six wide behind the leaders.

Poker Player breezed by Bashart in deep stretch to collect his second victory in three starts and improve his bankroll to $145,900 with Sunday’s $90,000 check.

A 2012 Keeneland November Sale graduate, Poker Player is a Kentucky-bred son of Harlan’s Holiday out of the Red Bullet mare Revel in the Win.

All Cash finished three-quarters of a length back in fourth and was followed in order by Medal Count, favored Boji Moon, Culprit, School On a Hill, Oogeley Eye, Tiger Bourbon, Whyruawesome, Solar Flair and Manaus.