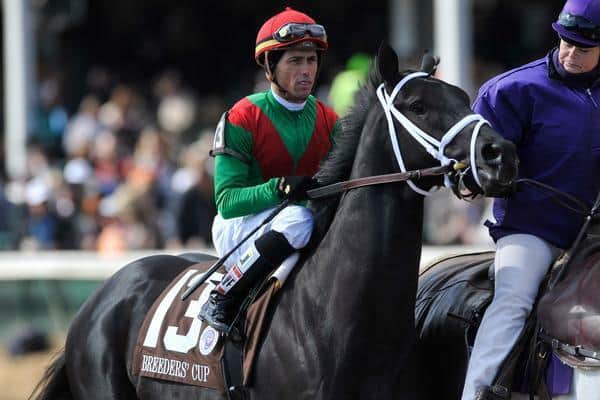 Team Valor International's Pluck will break from the outside post in Friday's Grade 3 Transylvania as he attempts to rebound from a disappointing effort in his season bow.

The 2010 Breeders' Cup Juvenile Turf hero moved from the Todd Pletcher barn to the Graham Motion shedrow and got no pace help when beaten 2-1/2 lengths in his Tampa Bay allowance return under Ramon Dominguez. He reunites with winning pilot Garrett Gomez and should be finishing fast.

Powhatan County set a fast pace and beat subsequent Spiral Stakes winner Animal Kingdom in his falt mile Gulfstream Park return March 3. He ended his juvenile campaign with a place finish behind Soldat and should make his presence felt throughout under Castellano.

Adirondack Summer has fired exacta shots in all three turf starts and the late striding Christophe Clement trainee is on the upswing.

Air Support won the Pilgrim Stakes last fall and makes his first start since finishing up the track in the BC Juvenile Turf.

Ronin Dax flopped in his three graded tries and won his other two turf starts against softer.

The one to catch appears to be Great Mills. Steve Asmussen's fleet colt goes for his fourth straight win and exits a sharp wire job tally in the Grindstone at Fair Grounds.

The ten horse field is completed by Stormy Rush, Legendary King, and Memen.

The $100,000 Transylvania is the 9th race on Keeneland's opening day spring card and will be run at a mile and a sixteenth on the turf.

Why speed is important in today's Kentucky Derby
Even though closers win their fair share of races,...

Why O Besos is a live long shot for the Kentucky Derby
It’s been eight years since Orb came from way back...