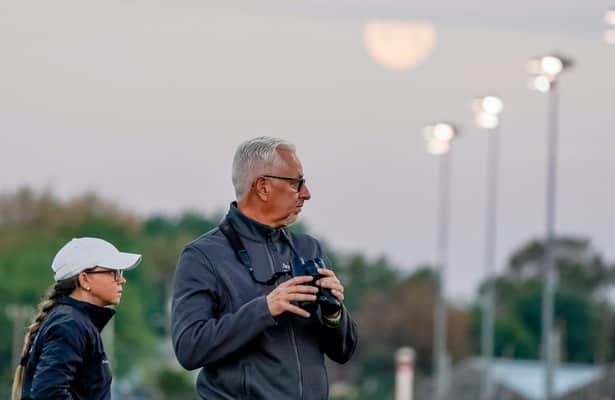 Todd Pletcher was a picture of multi-tasking as he meticulously checked the legs of his final set of trainees the other morning at Palm Beach Downs while never missing a beat during a phone call.

It is the same intensity, the same focus, he has brought to the daily grind since he began training in 1996. And it goes a long way toward explaining why he is likely to be honored as North America’s leading trainer for a record eighth time when the Eclipse Awards are announced Thursday night at The Breakers in Palm Beach.

Yes, they were. And, of course, the trainer and his staff knew exactly how to maximize that talent.

Breeders’ Cup Juvenile winner Forte is a lock to be honored as champion 2-year-old. Nest, second to stablemate Mo Donegal in Pletcher’s Belmont Stakes score, is a no-brainer as leading 3-year-old female. Distaff winner Malathaat looks to be hard to deny as the finest older female.

When Pletcher was asked about the prospect of being recognized as leading trainer for the first time since 2014, he replied, “We’re very similar to coaches in sports. We are, in a lot of ways, just as good as our players.”

Pletcher added: “Absolutely, the most critical component are the owners and the horses they provide you to train.”

The native of Dallas rattled off four consecutive Eclipse Awards from 2004 to 2007, then went back-to-back in 2013 and 2014. Although he continued to play above the rim, the highest honor has eluded him since.

“They are very hard to win,” Pletcher said. “It’s a little deceptive, I think. It’s titled a trainer’s award, but I think it’s a horse’s award, an owner’s award and certainly a team and a staff (award).”

Not surprisingly, the self-effacing trainer is not allowing himself the proper due. He made a difficult and decisive move when he equipped Shadwell Stable’s Malathaat with blinkers 10 races into her 14-race career.

“Sometimes you’ve got to go with your gut,” Pletcher said. “It was something we didn’t take lightly because she was performing at an extremely high level. But we kept thinking about it.”

The tipping point occurred when Malathaat, after forging into the lead, lost by a head to Clairiere in the June 11 Ogden Phipps (G1). Trusted jockey John Velazquez said something distracted his mount in explaining the agonizing defeat.

Some thought the blinkers were ill-advised after Malathaat again placed second to Clairiere in the July 24 Shuvee. Pletcher kept to his convictions.

“I was convinced, knowing her personality so well, that it was a product of the day itself,” he said. “It was super hot and she wasn’t acting herself in the paddock. I was still confident she needed blinkers, and it turned out to be right.”

With blinkers in place, Malathaat closed her illustrious career with a flourish. She swept three consecutive Grade 1 races in a streak that culminated in a blanket finish against Blue Streak and Clairiere in the Distaff.

“When you win by a whisker like that, you have to think it had some impact,” said Pletcher, breaking into a smile in a rare moment of self-satisfaction.

Pletcher won at a 22 percent clip last season, succeeding with 223 of 1,020 starters. His runners cracked the top three 52 percent of the time. His earnings of $30,482,937 established a career high. No North American trainer could match the combined exploits of Forte, dominant Alabama (G1) victor Nest and surging Malathaat, not to mention Pegasus and Whitney victor Life Is Good.

Yet he insisted he will be rooting more for his horses than himself. “To be honest, what would be more rewarding for me would be if those three horses win their division championships,” he said. “If something like that happens, I’m happy. If we win trainer, it’s icing on the cake.”

It figures to be one of those nights when Pletcher has it all.