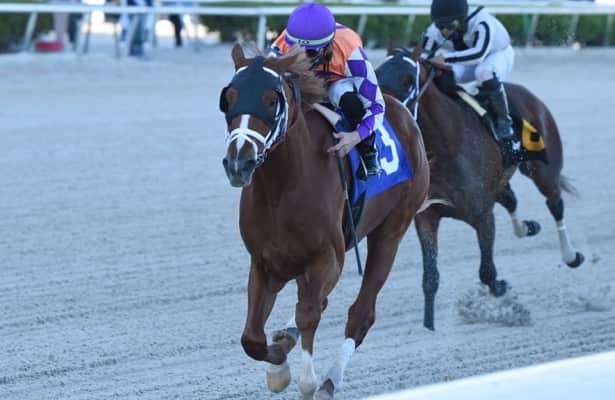 War Stopper will seek to earn graded stakes credentials in Saturday’s Grade 3, $100,000 Ghostzapper with a return to action at Gulfstream Park.

The 4-year-old son of Declaration of War, owned by Salerno Stables and Madaket Stables LLC, demonstrated a distinct fondness for the Gulfstream racing surface while winning back-to-back optional claiming allowances earlier in the 2020-21 Championship Meeting. The Todd Pletcher trainee ventured to Tampa Bay Downs, where he didn’t flash his natural early speed while racing evenly to finish third in the March 6 Challenger (G3).

“He seems to like the track here. He’s 2-for-2,” Pletcher said. “He didn’t seem to really fire at Tampa after brushing the gate leaving there. It took him out of his game a little bit.”

War Stopper has employed front-running tactics in all three of his career victories.

“We’ll try to get him into the race early on and hopefully he’ll improve,” Pletcher said.

In the Challenger, War Stopper saved ground in third early as Last Judgment grabbed a lead that he would never relinquish. The Pletcher trainee attempted to make an inside rally but was unable to mount a serious challenge.

“I think he’s a horse that wants to be forwardly placed,” Pletcher said. “We’ll try to do that here.”

Irad Ortiz Jr., who was aboard War Stopper for his two wins at Gulfstream the only two times he’s ridden him, has the mount.

War Stopper will get a second chance against Last Judgment Saturday. The Michael Maker trainee is certainly the one to beat in the seven-horse Ghostzapper off his commanding 2 1/4-length triumph in the Challenger. The 5-year-old gelding had previously finished off the board after pressing the pace in the $3 million Pegasus World Cup Invitational (G1) on Jan. 23 at Gulfstream Park.

The Florida-bred son of Congrats was claimed by Michael Dubb, Steve Homstock, Bethlehem Stables and Nice Guys Stables for $62,500 out of an Oct. 25 optional claiming allowance victory at Belmont Park. Two starts later, he captured the Sunshine Classic at Gulfstream.

Jose Ortiz, who was aboard for the Sunshine Classic score, returns to the saddle Saturday.

Owner/trainer Steve Budhoo’s Eye of a Jedi will seek his first graded-stakes victory in the Ghostzapper after being graded stakes-place twice during the Championship Meet. The 6-year-old gelding, who won back-to-back overnight stakes at Gulfstream Park during the summer, came of a five-month layoff to finish second behind Tax in the Dec. 12 Harlan’s Holiday (G3). The son of Eye of the Leopard came back to lose a photo finish while finishing second behind Performer in the Jan. 23 Fred W. Hooper (G3).

Hall of Famer is scheduled to ride Eye of a Jedi, who was most recently fourth in the Gulfstream Mile (G2), for the first time Saturday.