In Florida Derby, Candy Tycoon can put 'frustration' behind him 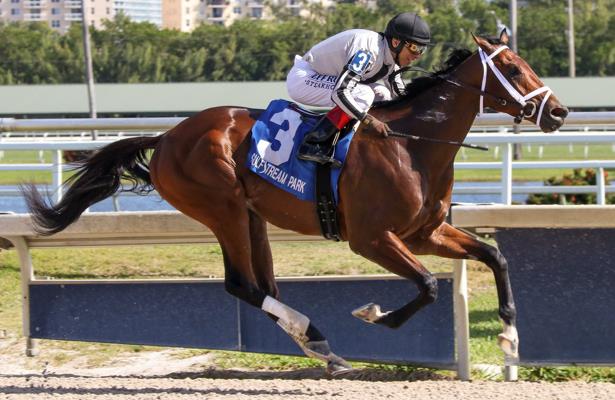 Todd Pletcher's five wins in the Florida Derby (G1) are the most ever by a trainer. When the gates open Saturday for the 69th renewal, the two-time Kentucky Derby-winning conditioner is expected to have multiple shots at adding to that total with Gouverneur Morris and Candy Tycoon.

Neither colt figures to be among the top betting choices in a field drawing the likes of graded stakes winners Tiz the Law, Ete Indien and Independence Hall. But for Candy Tycoon, who exits a distant second to Ete Indien in the Feb. 29 Fountain of Youth (G2) in his stakes debut, Pletcher is hoping the potential he's shown since early on will finally be displayed on race day.

By Twirling Candy, Mathis Stable's Candy Tycoon debuted last August at Saratoga and was third at odds-on going six furlongs. He remained a maiden through three subsequent starts before finally earning his diploma at Gulfstream in his sophomore bow on Jan. 25. Signaling Pletcher's regard for the colt, Candy Tycoon was sent straight into the deep waters of the Fountain of Youth off the maiden win.

"He's actually been a little bit of a frustration for us," Pletcher said Tuesday during a national media teleconference. "We felt like at Saratoga he trained exceptionally well before his debut. It's taken him a little while to get to where we thought he might be."

Dismissed at 23.9-1 in the Fountain of Youth, Candy Tycoon and jockey Manny Franco had just one horse beat after the opening quarter mile. With eventual winner Ete Indien loose on the lead, Candy Tycoon was roused by Franco entering the second turn and the pair commenced to improve their position. Candy Tycoon was set down for the drive after being carried wide into the stretch, and while no match for 8 1/2-length winner Ete Indien, he gamely overtook As Seen On Tv late to get second by a neck on the wire.

With two promising starts as a 3-year-old, Pletcher hopes Candy Tycoon is a colt on the rise.

"In the Fountain of Youth he was beaten 8 1/2 lengths, but he was still second and we thought that was an improved effort," Pletcher continued. "He came from a little off the pace, which is maybe a tactic he was looking for. He's trained forwardly for this and we're going to give it a try. We think if everything sets up like it could, based on the way the pace figures look, that it [will be] a good solid pace to run at. That should improve his chances."

Mathis Stable is operated by Bill and Terry Mathis of Oklahoma, who after owning horses for a time in the 1980s returned to the game in 2011. They have campaigned two graded stakes winners since their return to the sport -- Grade 2 winner My Miss Sophia and Grade 3 winner Bellera. Candy Tycoon was purchased for $170,000 at last year's OBS April 2-year-olds in training sale.