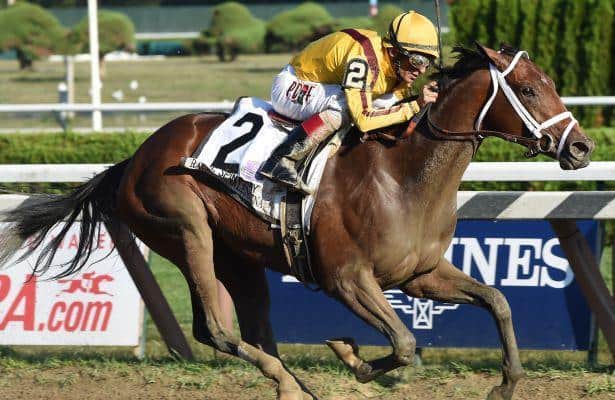 The lone daughter of 2009 Horse of the Year Rachel Alexandra, Rachel's Valentina won her 2-year-old debut by two lengths at Saratoga Race Course last summer before posting a one-length victory in the Grade 1 Spinaway. The Bernardini filly closed out her season with a runner-up finish to Songbird in the Grade 1 Breeders' Cup Juvenile Fillies.

Grade 1 Belmont runner-up Destin, meanwhile, emerged from his latest breeze in good order and remains on target for the Grade 2, $600,000 Jim Dandy on July 30.

The sophomore son of Giant's Causeway worked five furlongs in 1:00.87 Fridaymorning to wrap up his major preparations for the Jim Dandy, the traditional local prep for the Grade 1, $1.25 million Travers on August 27.

"He's doing excellent," Pletcher reported. "I thought he worked very well and came out of it good and if everybody stays on board for what they're supposed to be doing, I believe we're just going to stay here and run in the Jim Dandy."

Stradivari, who was injured while working in company with Destin on Friday, remains stable at Rood and Riddle, said Pletcher, adding that the Medaglia d'Oro colt is slated for surgery on Tuesday, provided "everything goes well over the next 48 hours."

Far From Over, winner of the 2015 Grade 3 Withers who remained unbeaten coming off a 16-month layoff against optional claiming company in June, worked over the Oklahoma training track Sunday morning and could make a summer appearance at the Spa.

"He's been training very well. We've been very pleased with him," said Pletcher. "I thought his comeback race was quite good. I like what we're seeing in the morning. I'd like to get a real nice, cozy allowance race for him sometime in the next three weeks."

Breezing in company with multiple graded stakes winner Protonico, Far From Over covered five furlongs in 1:02.03.

Pletcher's impressive first-out winner One Liner has stamped himself as an early contender for the Grade 1, $350,000 Hopeful on closing day, September 5, following his 1 ½-length maiden victory Saturday.

"It was kind of what we were expecting from him based on the way he'd been training," Pletcher said of the race. "He had been pretty professional in the mornings and I liked the fact that he drew toward the outside and was able to put himself in a good spot without having to shove on him the whole way. It was a good professional debut. I would think we would consider a race like the Hopeful, but we'll see how he trains and let that guide us."

» Horse: Stradivari
» Horse: Far From Over
» Person: Todd A. Pletcher