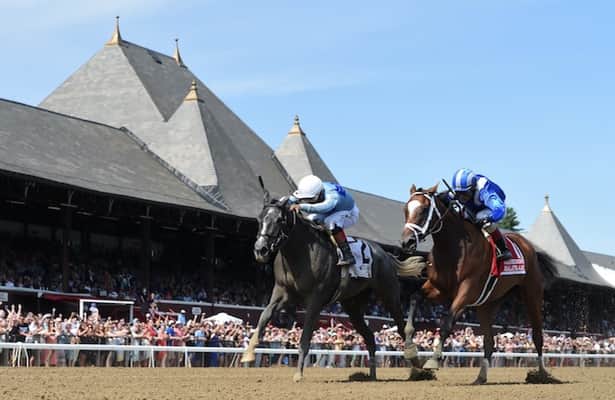 Malathaat garnered a career-best 96 Beyer for her game runner-up effort to Maracuja in Saturday's Grade 1 Coaching Club American Oaks and likely will point to the Alabama (G1) for her next start.

Trained by Hall of Famer Todd Pletcher and piloted by fellow Hall of Famer John Velazquez, the regally bred Curlin bay was pressured throughout the nine-furlong journey, first by Maracuja and later by Clairiere, after exiting the inside post in a compact field of four.

Malathaat, out of the Grade 1-winning A.P. Indy mare Dreaming of Julia, maintained a precarious advantage at the stretch call but could not repel the rallying Maracuja, who prevailed by a head.

"Hounded is an accurate description," Pletcher said. "We had a difficult time analyzing the race beforehand and how we thought it might unfold. There wasn't a lot of speed on paper and we were in the 1 post with a target on our backs, so our strategy was to let her run away from the gate and try to establish a position into the first turn or if someone was to clear us, hopefully move out into the clear.

"Everyone left there with the same intention and by the time we got to the first quarter we'd gone 23 and 1, which is fine if we could have a little breather along the way," Pletcher continued. "But as soon as we got on the backside, Irad (Ortiz Jr. aboard Clairiere) made a move and put pressure on her. She kind of had to fight off the whole field. When you're a heavy favorite in a race like that with a short field, those things can happen. I'm not disappointed with the filly at all. I thought she ran bravely, considering everything that was thrown at her off the layoff. If she comes back well, we'll point towards the Alabama."

The Texas-bred daughter of Commissioner, who captured the 1 1/16-mile Herecomesthebride (G3) by disqualification in February at Gulfstream and the nine-furlong Wonder Again (G3) in June at Belmont, worked a half-mile in 51.66 Saturday on the Saratoga main track.

"She worked fine. She's a high energy filly that seems to take her races well," Pletcher said. "She'll have one more breeze and it seems like everything is in order."

Last out, in the Belmont Oaks Invitational (G1), Con Lima stretched her speed to 10 furlongs over good going but was collared in the final stride by highly regarded Santa Barbara.

Pletcher was full of praise for the ultra-consistent dark bay, who boasts a record of six wins and five seconds from 12 starts with purse earnings of $509,865.

"She just continues to step up. She's been super consistent and gives a good effort every time," Pletcher said.

Pletcher said the tighter turns of the Saratoga turf may prove favorable for the handy Con Lima.

"This will be a little more favorable, although she did win the Wonder Again at Belmont," Pletcher said. "She seemed to really like Gulfstream, which is a tighter course, so maybe that will work in her favor here."

Undefeated Life Is Good, recently transferred to Pletcher's care, worked a half-mile in 48.88 Saturday on the Oklahoma dirt training track.

"He breezed in in 48 and change. He's a very impressive horse to watch train. He did that well in hand throughout," Pletcher said. "We'll play it by ear, but we have a couple of options with the Allen Jerkens here and the Smarty Jones at Parx would be a possibility if we needed more time. He's a super talented horse and we're fortunate to have him."

Midnight Worker, a 2-year-old bay colt by Outwork, earned a 59 Beyer for a hard-fought win by a head in a six-furlong maiden special weight Saturday at Saratoga. A $60,000 purchase at the Fasig-Tipton Kentucky Fall Yearling Sale, Midnight Worker was piloted to victory by Luis Saez.

"It was a good effort," Pletcher said. "He was under pressure from the one hole, but worked out a trip and fought off a couple challenges. I was proud of his effort and he was very solid on debut. "