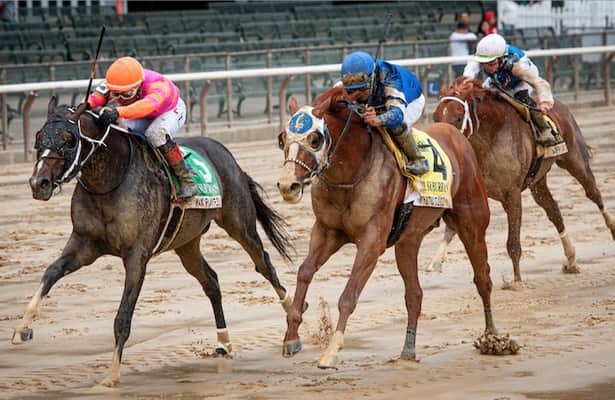 Leaving from the outermost post 6 in the Suburban under Irad Ortiz Jr., Happy Saver tracked in fourth position, outside of Mystic Guide, as Moretti set the early splits.

Mystic Guide made a strong inside move into the turn but the four-wide Happy Saver failed to fire his best shot, closing to complete the trifecta as Max Player upset Mystic Guide by a neck.

“I thought Happy Saver ran well,” said Pletcher. “He was stuck wide the whole way around there from that post. It was a little bit of a tricky start, but I thought he put in an honest effort. They both came back very well.”

Pletcher said he’ll take some time to consider options, although the 1 1/8-mile $1 million Whitney (G1) on Aug. 7 at Saratoga is a possibility.

“We'll see how he bounces out of it and consider the Whitney and the Jockey Club and play it by ear,” said Pletcher.

The Whitney offers a win-and-you're-in berth to the Breeders' Cup Classic.

A number of Pletcher stars were on the work tab Sunday at Belmont, including Following Sea, a Runhappy colt, who is pointed to the nine-furlong $1 million Haskell Invitational (G1) on July 17 at Monmouth Park.

“He breezed well and we're still on target for the Haskell,” said Pletcher.

Pletcher said Malathaat, who worked a half-mile in 49.49 on the dirt training track, remains on target for the $500,000 Coaching Club American Oaks (G1) , a nine-furlong test for sophomore fillies on July 24 at Saratoga

"She looked great. Everything is going smoothly with her," said Pletcher.

"We were thinking about the Dwyer and unfortunately he got a bit of a cough and knocked us off a breeze last week. We'll consider an allowance race for him," said Pletcher.

"They both breezed well and are on track for next weekend," said Pletcher.

Con Lima is exiting a sharp win in the nine-furlong Wonder Again (G3) on June 3 on the Belmont turf, and Sainthood captured an off-the-turf edition of the Pennine Ridge (G3) on May 29.

"We were hoping to get that turf try in the Pennine Ridge but it ended up working out OK, so we'll find out next week," said Pletcher.