Pletcher: ‘We’re focused on the Classic’ for Life Is Good 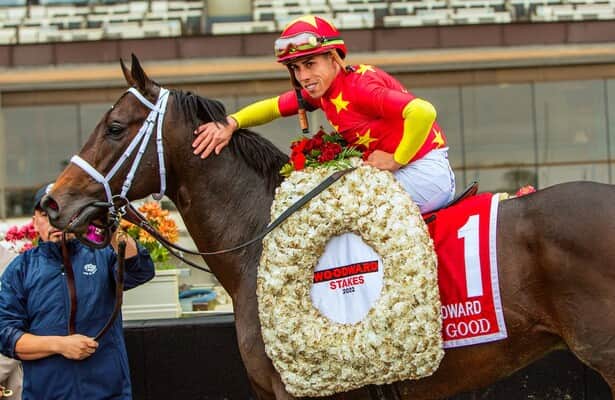 The morning after his victory in the slop of the Grade 1, $500,000 Woodward Stakes at Aqueduct, Life Is Good was ready to travel Monday to Kentucky, where he will race Nov. 5 in the Breeders’ Cup Classic.

“From all indicators talking to (WinStar CEO) Elliott (Walden) and those guys yesterday, we’re focused on the Classic,” trainer Todd Pletcher said Sunday. “He’ll ship to Keeneland tomorrow afternoon and train towards that.”

WOODWARD: Life Is Good repels challenge to win in the slop

Owned by WinStar Farm and CHC, Life Is Good became a four-time Grade 1 winner and garnered a 97 Beyer Speed Figure, according to Daily Racing Form, for his 1 1/4-length victory in Saturday’s Woodward for horses 3 years old and up traveling nine furlongs over a sloppy and sealed main track at the Belmont at the Big A fall meet.

The accomplished Life Is Good broke sharply from the inside post under regular pilot Irad Ortiz Jr. and was quickly maneuvered off the rail and into the three path to lead the compact field of four at each point of call with Law Professor tracking in third.

At the three-quarter-mile call, Law Professor was called on by Jose Ortiz to take up second position and make his run at Life Is Good, swinging three wide and steadily making up ground. Life Is Good dug in when asked by Ortiz, drifting out a bit in the stretch while Law Professor inched closer.

Life Is Good would not be denied, and he valiantly fought off Law Professor’s game bid to secure the victory at a final time of 1:49.57 in his first outing over sloppy going. It was another 10 1/4 lengths back to Pletcher’s other trainee, Keepmeinmind, in third.

Pletcher said he was pleased with Life Is Good’s effort, noting the demanding fractions late into the race.

“They were coming home pretty good. The last three-eighths went in 36-and-1, and going a mile-and-an-eighth, it’s hard to come home that fast, especially on an off and heavy racetrack,” Pletcher said. “I thought it was probably a little better than people might consider just looking at the final margin. Law Professor ran a good race, and I’m happy to accomplish what we were hoping to.”

The win was Life Is Good’s third this year in a Grade 1 race, adding to scores in the Whitney in August at Saratoga and the Pegasus World Cup Invitational in January at Gulfstream Park. His lone start at 1 1/4 miles was an even, fourth-place effort in the Dubai World Cup (G1) in March.

Pletcher said he is confident the 4-year-old son of Into Mischief will handle stretching back out to 10 furlongs in the Breeders’ Cup Classic.

“If you watch yesterday, he continued to gallop out past the wire,” Pletcher said. “All of his training has given us the confidence he’ll do it.”

Pletcher also provided an update on top 3-year-old filly Nest, who was last seen posting a strong 4 1/4-length victory in the Alabama (G1) on Aug. 20 at the Spa. The daughter of Curlin will likely take on older rivals in next Sunday’s $250,000 Beldame (G2) for fillies and mares, 3 years old and up, at Aqueduct.

Nest has posted three works at Belmont Park since her Alabama victory, most recently breezing a half-mile in 49.42 seconds over the training track Sunday.

“She just breezed, and we’re happy with that,” Pletcher said. “We’ll look her over in the morning and most likely go to the Beldame.”

Owned by Repole Stable, Eclipse Thoroughbred Partners and Michael House, Nest is in search of her fourth graded win this year. In addition to her Alabama score, she dazzled with a 12 1/4-length romp in the Coaching Club American Oaks (G1) in July at Saratoga, earning a 104 Beyer for the memorable victory. She also finished a game second to stablemate Mo Donegal when facing males in the Belmont Stakes.

Pletcher added that Waterford Stable’s Winters Back, a last-out third in the Bernard Baruch (G3), likely will skip the $150,000 Knickerbocker (G3) next Sunday at Aqueduct and, instead, will be pointed to an allowance race in the near future.