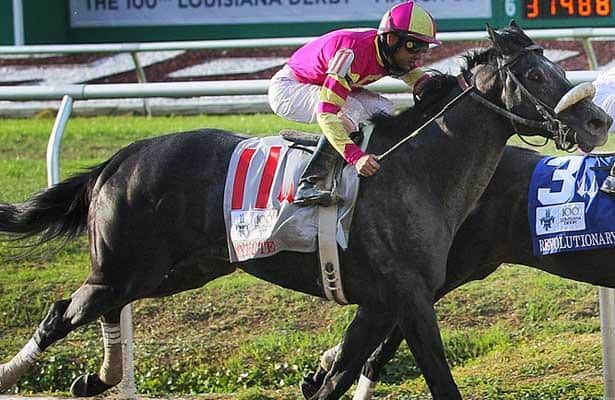 Seven-time Eclipse Award-winning trainer Todd Pletcher, a former assistant to legendary Hall of Famer D. Wayne Lukas from 1989-95, will attempt to land the race named in his mentor's honor on Saturday when Mylute invades from New York for the third running of the $175,000 Lukas Classic (Listed) at Churchill Downs.

Formerly known as the Homecoming Classic, Churchill Downs officials renamed the 1 1/8-mile race this summer to honor the iconic 80-year-old Lukas - a four-time winner of the Kentucky Derby and Kentucky Oaks who has been based at Barn 44 since 1989 - more than 25 years ago.

"I think it's great that Churchill Downs has named a race after Wayne," Pletcher said via telephone from New York on Wednesday. "He's done so much for the industry and so much for Churchill Downs. I think he's one of the guys that made the (Kentucky) Derby a bigger event than it already was prior to his era."

Lukas, who has conditioned 26 Eclipse Award-winning champions, was hospitalized Saturday in Philadelphia when he wasn't feeling well while in town to saddle Mr. Z in the Pennsylvania Derby and Take Charge Brandi in the Cotillion. He underwent a procedure there Tuesday to insert a permanent pacemaker. Pletcher was told that Wednesday that Lukas might return to Louisville on Friday but was uncertain if Lukas would be able to attend Saturday's race.

"Hopefully, (Saturday's Lukas Classic) is serving as a pick-me-up for him," Pletcher said. "I know he's had a tough week but at the same time I know if anybody can bounce back from just about anything, it's Wayne. I think he's leaving (Philadelphia) on Friday - at least that's what I heard today. I'm going to guess he's not going to be there Saturday but then again you never know with Wayne."

With eight horses entered on Belmont Park's 11-race Saturday card, which includes five graded stakes, it's not surprising that Pletcher won't be able to attend the Lukas Classic himself. But the 48-year-old is eager to try Mylute in the 1 1/8-mile race against seven older horses and win the race that honors his former teacher.

Mylute, owned in partnership by T. Paul Bulmahn's GoldMark Farm and Mandy Pope's Whisper Hill Farm, is best known for his third place finish behind Oxbow and Itsmyluckyday in the 2013 Preakness (GI) while under the care of trainer Tom Amoss. Now age 5, the Kentucky-bred son of Midnight Lute made his first start for Pletcher in May a winning one, prevailing by 2 ¼ lengths in an $85,000 allowance optional claiming event over one mile at Belmont Park.

Subsequent starts resulted in a distant fifth place finish in the $500,000 Suburban Handicap (GII) on July 4 and a second to Bay of Plenty in the $100,000 Alydar at Saratoga on Aug. 9. In his last start three weeks ago in the $600,000 Woodward (GI) at Saratoga, Mylute finished fifth and had to face graded stakes-winning stablemates Liam's Map and Coach Inge, who ran 1-2. Wicked Strong, the 2014 Wood Memorial winner, and Suburban hero Effinex were third and fourth, respectively.

"We felt like (the Lukas Classic) might be a race that made sense for him," Pletcher said. "He's banged heads with some pretty good ones the last couple of times. This race isn't easy by any means but you could probably make an argument that it's a little bit of class relief from The Woodward anyway."

Pletcher, who leads the nation in stable earnings for a 10th time with nearly $19 million, has secured the services of jockey Florent Geroux, who is in the midst of a break-out year that includes Grade I triumphs in the Arlington Million (The Pizza Man) and Cotillion (I'm a Chatterbox) plus a trio of $300,000 stakes wins at the recently-concluded Kentucky Downs meeting.

"I think he's a horse that you just kind of let him find his way early on," Pletcher said of Mylute. "We certainly wouldn't take anything away that came easy to him. Looking at the race on paper, there doesn't appear to be a ton of early speed so he might find himself a little bit closer in that scenario."

The late-running Mylute has a 21-4-4-4-$791,022 career record and will break from post No. 6. He is winless in four starts at Churchill Downs, but ran fifth in the 2013 Kentucky Derby Presented by Yum! Brands when Orb prevailed by 2 ½ lengths. Mylute is scheduled to arrive at Churchill Downs by van early Friday morning and will be stabled in Stakes Barn 17.

Smack Smack invades from Oklahoma for trainer Don Von Hemel after posting a half-length victory at odds of 20-1 in the $192,500 Governor's Cup (Listed) at Remington Park on Aug. 15.

The Ian Wilkes-trained Ulanbator beat A.L. Luedtke's Geothermal by a nose in the $103,150 Michael G. Schaefer Memorial (Listed) over one mile and 70 yards at Indiana Grand on July 18. Wilkes, of course, saddled 2013 Lukas Classic winner Fort Larned, who was the defending Breeders' Cup Classic champion.

Claiborne Farm and Adele Dilschneider's Departing, a Grade II winner on turf in Churchill Downs' Firecracker earlier this year for trainer Al Stall Jr., has banked the most money in the field of eight with $1,738,959 from a record of 8-2-3 in 19 starts.

Donegal Racing's Irish You Well will ship from New Jersey for Saturday's race following a narrow loss in an allowance optional claiming event over one mile on Aug. 22 at Monmouth Park for trainer Wayne Catalano.

Abraham will make his second start for owner Brad Grady and trainer Joe Sharp after being claimed off Hall of Fame trainer Bill Mott for $50,000 at Saratoga in early August. Three weeks ago, the 5-year-old gelding was eighth of 10 in the $200,400 Presque Isle Mile over the synthetic Tapeta surface. He won the Schaefer Memorial at Indiana Grand in 2014.

Frank Jones' Hesinfront, trained by Dale Romans, returns to dirt for only the fourth time in his 19-race career and hopes to cross the finish line in first for the first time since June 2014.

The first two winners of the Lukas Classic - Fort Larned (2013) and Cigar Street (2014) - used the race as a springboard to the $5 million Breeders' Cup Classic (GI). This year's 1 ¼-mile Classic is scheduled five weeks after the Lukas Classic on Oct. 31 at Keeneland.

The Lukas Classic, which goes as Race 10 at 5:20 p.m. (all times Eastern), is the richest of three stakes scheduled for Saturday's 11-race card at Churchill Downs. The Ack Ack Handicap and Jefferson Cup - a pair of Grade III stakes - also will be run.

How do six expert bettors feel about Essential Quality?
Out of sight often means out of mind for futures b...