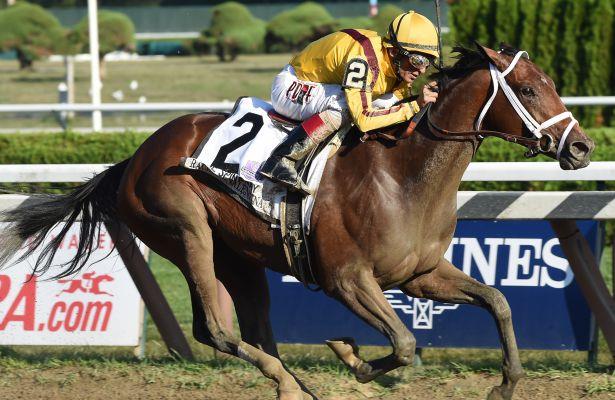 A week before the first day of the two-day Breeders’ Cup World Championships at Keeneland, trainer Todd Pletcher expressed confidence in the 11 horses he has pre-entered to the event. All have been training at Keeneland for several weeks.

“I feel really, really good about the way the horses are training,” he said. “Over the last two days, we’ve seen the kind of works you’d like to see coming into big races: Horses finishing well, galloping out strongly, cooling out quickly, staying in the feed tub – all those little signs that you’re looking for. Right now I couldn’t be more pleased with all of them.”

In darkness, Pletcher worked a quartet of horses four furlongs each:

Sweet Whiskey also was clocked in :49.

The final member of the Pletcher Breeders’ Cup contingent, Stopchargingmaria (Distaff), is to work Saturday.

Lael Stables’ Ageless will not run in next Saturday’s $1 million Breeders’ Cup Turf Sprint (G1), according to trainer Arnaud Delacour.

“We are not going to make it,” Delacour said of the mare, who sustained a deep cut below her left hock in winning the Buffalo Trace Franklin County on Oct. 9. “I wish we had another two weeks, but you can’t go into a Grade 1 race half ready. It is just bad timing, but that’s racing.”

Ageless, fourth in last year’s Breeders’ Cup Turf Sprint, is scheduled to return to Fair Hill Training Center in Maryland on Sunday. No decision has been made on the 6-year-old mare’s racing future.

“There is no rush to make a decision,” Delacour said. “Everything looks good now, and we expect she will make a full recovery. Then we will just take it one race at a time.”

“The hard work is done and now we have to get the real job done,” Oliver said. “She was sensational this morning, and I thought her work last week (a half-mile in :47.80) was super. She’s a big, strong mare and does better with a solid work a week out. She’s a good doer and she never backs off her feed.” …

Another Ramsey horse, Sapphire Kitten (Juvenile Fillies Turf-G1) worked a half-mile on the turf at Churchill Downs in :51.80 with trainer Joe Sharp aboard. Runner-up in the JPMorgan Chase Jessamine (G3), Sapphire Kitten posted fractions of :13.80, :27, :51.80 and galloped out five-eighths in 1:07. …

Also working on the grass at Churchill was Midwest Thoroughbreds’ The Pizza Man (Longines Turf-G1), who covered five furlongs in 1:04. Runner-up in the Shadwell Turf Mile (G1) in his most recent start, The Pizza Man posted fractions of :13, :39, :51.60, 1:04 and out six furlongs in 1:19.40 under jockey Florent Geroux for trainer Roger Brueggemann. …

Corey Lanerie rode two winners Thursday to boost his lead over Julien Leparoux to 20-16 in the race for leading rider with two days remaining in the 17-day Fall Meet. Lanerie is named on six mounts this afternoon and Leparoux seven.

Mark Casse retains a three-win lead in the chase for leading trainer with nine victories so far. Kenny McPeek, Chris Richard and Wesley Ward are next with six. Casse has won one training title here, that coming in the 2014 Spring Meet.