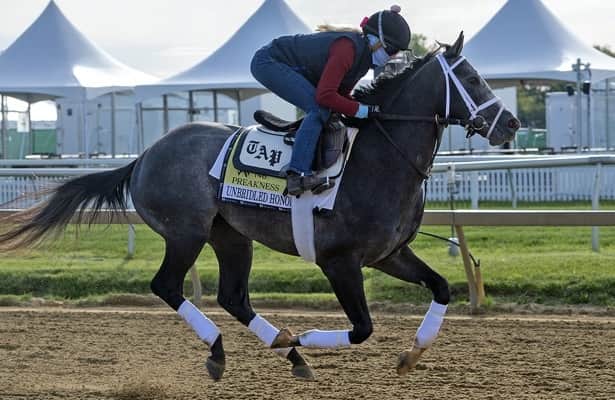 Unbridled Honor will be Pletcher’s 10th Preakness starter on a list that includes 2010 Derby winner Super Saver, whose Triple Crown plans were dashed with an eighth place at Pimlico.

Pletcher’s best Preakness finish remains his first one in 2009, when Impeachment was third after finishing third in the Kentucky Derby. Impeachment is one of only two Pletcher horses to run in the Preakness after a loss in the Derby, the other being Circular Quay, who finished fifth in Baltimore.

By contrast, Pletcher’s 2021 quartet of runners stretched his Derby participants to a record 59, also dating to 2020. Pletcher has frequently said that his horses do better with more spacing between races than the two weeks between the Derby and Preakness.

Unbridled Honor, a Whisper Hill Farm homebred, comes in off a five-week turnaround from the 1 1/16-mile Lexington. That followed a fourth place in the Tampa Bay Derby (G2) five weeks prior.

“I think the timing suits him,” Pletcher said. “I think the distance should suit him. I think he would benefit from a good pace up front, which maybe we’ll get if Midnight Bourbon shows a little initiative and (with) Concert Tour and the first-place finisher in the Derby. Hopefully he can get away a little better, get in a little better stalking position and then have a good pace to run at.”

Medina Spirit led all the way in the Derby while knocking out a representative pace. But he did so without anyone right at his throat latch and also got a breather in the third quarter-mile heading into the far turn. Pletcher said he knew his four late-closing horses were in trouble halfway through the race.

“It was an uncontested lead,” Pletcher said. “When I was watching the race live, when he got to the backside and he pricked his ears, I thought to myself, ‘Oh, I don’t like this,’ because all my horses at that point were way back anyway. It wasn’t really shaping up like I was hoping at that stage.”

Unbridled Honor, a gun-metal gray son of Honor Code and out of the Unbridled’s Song mare Silvery Starlet, galloped Wednesday morning at Pimlico after vanning from Belmont Park on Tuesday. Pletcher said he hopes to be at Pimlico Friday for the eighth race, in which he’s running Spice Is Nice in the $150,000 Allaire DuPont Distaff (G3).