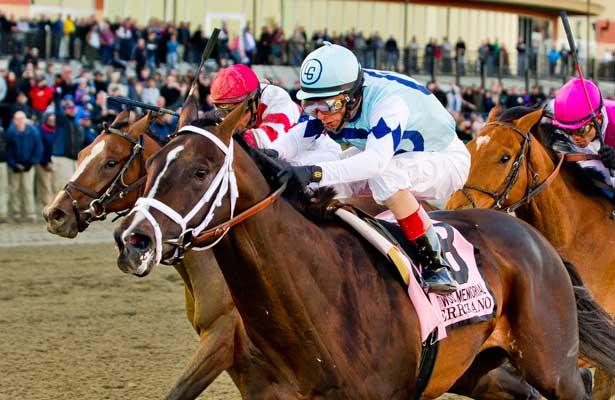 BLACK ONYX – Sterling Racing’s Black Onyx (No. 12) walked the shedrow at Barn 41 a day after clockers caught  the Spiral (Grade III) winner in 1:25 for six furlongs in a strong gallop.

CHARMING KITTEN / OVERANALYZE / PALACE MALICE / REVOLUTIONARY / VERRAZANO / WINNING CAUSE – Another busy morning at the Todd Pletcher barn at Churchill Downs was highlighted by works by undefeated Wood Memorial (GI) winner Verrazano (No. 2) and Louisiana Derby (GII) winner Revolutionary (No. 6), who both worked on the fast main track following the morning renovation break Sunday at 8:30 a.m.

Working with La Troienne Presented by Steelcase and ORI (GII) contender Authenticity, Verrazano breezed five furlongs in 1:00.20 and recorded fractions of :13, :25.20 and :36.80 and galloped out six furlongs in 1:13.20, seven furlongs in 1:26.80 and a mile in 1:41.60. Guided in the work by Gary Stevens, Verrazano started one length back behind the workmate and they finished together.

“We wanted a good, solid five-furlong breeze and we wanted to sit him behind another horse and have him sit back and relax for a little bit,” Pletcher said. “We also wanted to have him finish up good and gallop out strong. He accomplished all that. I thought he went great and he seemed to get over the track well. We liked what we saw.”

Let’s Go Stable, Michael Tabor, Mrs. John Magnier and Derrick Smith’s Verrazano’s five-eighths time was the third fastest of 40 at the distance. He is scheduled to work again at Churchill Downs next Sunday, April 28.

Working on the inside of recent first-level allowance winner Red Rifle, Revolutionary breezed four furlongs in :48.80 and recorded fractions of :12.60, :24.80 and :37 and galloped out five furlongs in 1:01.20 and six furlongs in 1:15.20. Calvin Borel was in the irons for the work, which ranked 22 of 81 at the distance, and will be aboard Revolutionary on the First Saturday in May.

“We wanted to get Calvin familiar with him because it’s the first time he’s been on him,” Pletcher said. “We were looking for a little less from him. He went a good half and finished up well. I love the way he galloped out and Calvin was really happy with him. So, we accomplished what we wanted to do with him as well.”

“He did everything right and worked really well,” Borel said. “I think this colt has the potential (to win the Derby). He’s a nice horse and he’s been through everything you want a Derby horse to go through.”

WinStar Farm LLC’s Revolutionary is scheduled to work at Churchill Downs next Sunday.

Arkansas Derby (GI) winner Overanalyze (No. 5), Blue Grass (GI) runner-up Palace Malice (No. 13) and Blue Grass third Charming Kitten (No. 21) all galloped about 1 3/8 miles following the morning renovation break at Churchill Downs. Overanalyze was under Obed Perez, Palace Malice was guided by Jake Nelson and Humberto Zamora was aboard Charming Kitten. All three are scheduled to breeze over the Louisville oval next Sunday.

Winning Cause jumped to No. 22 on the “Road to the Kentucky Derby Presented by TwinSpires.com” Leaderboard (Editor’s Note: Winning Cause is No. 22 because No. 20 Den’s Legacy was added back on the list Sunday because a Derby run hasn’t been ruled out) following his victory in Saturday’s Lexington (GIII), a Wild Card race worth 20 points to the winner. Following that score, Winning Cause vanned back to Churchill Downs and was in good order Sunday morning.

The next race for Winning Cause has not been determined; however, Pletcher has not ruled out the Kentucky Derby and said he will need to discuss plans with owner Gil Moutray’s of Alto Racing LLC.

Winning Cause could be the sixth Derby starter for Pletcher, who currently trains five horses ranked in the Top 20 on the Leaderboard. Three trainers have saddled a record five starters in the Kentucky Derby: Pletcher (2007), Nick Zito (2005) and D. Wayne Lukas (1996). No trainer has saddled six.

Also in trainer Bob Baffert’s barn here are Code West (No. 23) and Power Broker (No. 26), both owned by Gary and Mary West. Both horses galloped under Alvarez and are penciled in to work Monday according to Peter Hutton, assistant to Baffert.

Daily Racing Form’s Jay Privman reported Sunday that Super Ninety Nine (No. 18) and Den’s Legacy (No. 20) would work Wednesday at Santa Anita to determine whether or not they’d board a Thursday flight to Louisville.

FALLING SKY – After Sam F. Davis (GIII) winner Falling Sky (No. 19) finished fourth in the Arkansas Derby (GI), his connections were uncertain about running the bay son of Lion Heart in the “Run for the Roses,” but trainer John Terranova confirmed Sunday that Falling Sky “is a go” for Kentucky Derby 139.

“It was up to the owners,” Terranova said. “Right now, they are happy to point to the Derby as long as everything is going well with the horse and right now he’s great.”

Newtown Anner Stud, James Covello and Joseph Bulger’s Falling Sky, who galloped beneath the Twin Spires under exercise rider Cassie Garcea on Sunday, is no stranger to the Churchill Downs surface. Prior to the Arkansas Derby, Falling Sky breezed a bullet five furlongs in :59.60 over the fast Louisville track.

“He worked fantastic over the Churchill surface and takes to the track beautifully,” Terranova said. “He’ll breeze next weekend on Saturday or Sunday, depending on the weather. As long as he breezes like we want him to breeze, then we’ll stay on target for the Derby.”

Jockey Luis Saez will have the Kentucky Derby mount.

MYLUTE – Louisiana Derby (GII) runner-up Mylute (No. 16) recorded his third work at Churchill Downs since arriving in Louisville on April 2 and breezed four furlongs Sunday in :47.80 for trainer Tom Amoss.

Working on the fast main track at 6 a.m. under jockey Rosie Napravnik, Mylute recorded fractions of :12.20, :24.20 and :36.20 and galloped out five furlongs in 1:01.60. The half-mile time was the second fastest of 81 at the distance Sunday. Amoss was surprised with how quickly Mylute worked.

“We went right when the track opened and it was very fast. It was very fast, but very safe. He’s usually not that into it, to be quite honest with you, when he’s by himself. But he was never asked and I know it was a work that Rosie was impressed with. So, I don’t think (the quick work) is an indication that he’s gotten overly aggressive, I think it’s an indication that he’s enjoying his work and coming into the race the right way.”

GoldMark Farm LLC and Whisper Hill Farm’s Mylute is scheduled to work another half-mile at Churchill Downs next Sunday on April 28.

NORMANDY INVASION – Fox Hill Farms’ Normandy Invasion (No. 14) had the first of his two scheduled works leading up to Kentucky Derby 139 on Sunday morning, covering a half-mile in :48.40 over a fast track under exercise rider Javier Herrera for trainer Chad Brown.

Working on his own after the renovation break, Normandy Invasion posted fractions of :11.80, :23.40 and galloped out five furlongs in 1:01.60. The move was the seventh fastest of 81 at the distance.

“I am very happy with the work,” Brown said. “I wanted him to go in about :48. It was basically a maintenance move. He has had a nice week of gallops here and he is plenty fit and I just want to maintain what we have.”

Runner-up to Verrazano in the Wood Memorial in his most recent start, Normandy Invasion is scheduled to work again next  Sunday, weather permitting. Brown has not determined whether Herrera or jockey Javier Castellano would be aboard for that move.

Brown, who has not had a Kentucky Derby starter, is pleased with the progress Normandy Invasion has made this year.

“I like that he is fresh coming into the race and he has proven he can overcome difficult trips,” Brown said. “He has gotten sharper as the year has gone on and today you saw part of that when he broke off a little sharper than he has been.”

Normandy Invasion arrived at Churchill Downs last Sunday, April 14, and will have nearly three weeks of preparation over the track before the Derby.

“The little time I was at Churchill Downs before with Bobby Frankel, I observed other trainers to see what worked for them here,” Brown said of coming in early. “I am going to give him every chance to be successful.”

OXBOW/WILL TAKE CHARGE – Willis Horton’s Will Take Charge (No. 9) continued his preparations for Kentucky Derby 139 by working a mile in 1:41.60 after the morning renovation break under jockey Jon Court.

“The work went very well, it was good,” said four-time Kentucky Derby-winning trainer D. Wayne Lukas said. “I was pleased. I told Jon coming off the track that this horse could cost me a lot of sleepless nights because I am getting excited. He wasn’t blowing at all when he came off the track.”

Lukas will be sending Will Take Charge into the Derby off a seven-week layoff.

“I worked him a mile the last time and I might do six or seven (furlongs) next week,” Lukas said. “He is 17 hands, like a big, gangly kid. I gave him a light month to give him some time to fill out.”

Calumet Farm’s Oxbow (No. 17), who is scheduled to work Monday with Gary Stevens up, galloped 1 ½ miles under exercise rider Rudy Quevedo when the track opened for training.

“Oxbow is entirely different from Will Take Charge,” Lukas said. “He shows up every day and tomorrow will probably do more than we like as he does every morning.”

Lukas compares the buildup to the Derby with the NCAA basketball tournament.

“In the tournament, you have teams coming from different conferences and for the Derby, you weigh which races were stronger … are the Florida horses better … is it a down year for the California horses,” Lukas said. “But this is a great time and it keeps us young.”

So, with the recently completed NCAA tournament that was won by Louisville, who does Lukas feel the hoops equivalents are to his Derby hopefuls?

VYJACK – Pick Six Racing’s Vyjack (No. 8), third in the Wood Memorial (GI) in his most recent start, passed through the Churchill Downs stable gate at 4:10 a.m. Sunday after vanning from Fair Hill, Md.

“We had a good van ride, no problems,” trainer Rudy Rodriguez said. “He will just walk the shedrow this morning and probably go to the track tomorrow. We usually go out early at home in New York.”