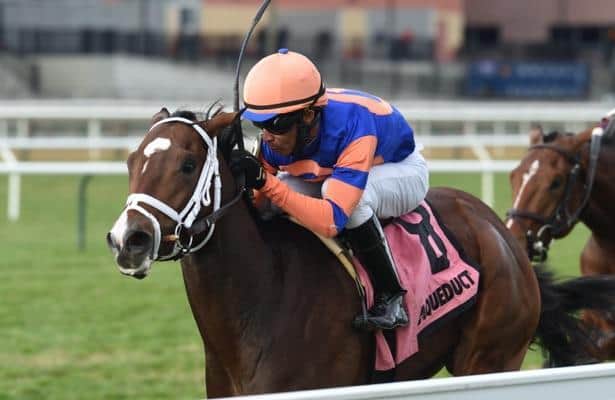 Trainer Todd Pletcher said he was happy with the performance from Never Surprised, who made a big jump up in class in a short period of time with a wire-to-wire win that garnered an 89 Beyer in the $100,000 Central Park at Aqueduct Racetrack.

The 2-year-old son of second crop sire Constitution broke his maiden on Nov. 8 going six furlongs over the track's outer turf before stretching out to 1 1/16 miles on the good inner turf on Saturday.

Pletcher said he was asking quite a bit out of his rising star but was pleased to see him handle the task.

“I thought he ran really well,” Pletcher said. “We were running back in 20 days off an impressive maiden win going from short to long, maiden to stake and firm to soft. We threw a lot at him in a short period of time and he passed the test. It was an impressive race from him.”

Pletcher said Never Surprised will ship to his Florida division at Palm Beach Downs, where the conditioner is primarily based during the winter months and receive a freshening before deciding a next move.

“It’s encouraging what he can potentially do moving forward,” Pletcher said. “He came out of it in good order. We’ll send him down to Florida and give him a bit of a breather and take things from there.”

Bought by Repole Stable for $200,000 from last year’s Keeneland September Yearling Sale, Never Surprised is out of the unraced Tiznow mare Tiz Dixie.

The son of Empire Maker, who earned a 60 Beyer, is owned by The Estate of Paul Pompa Jr. in partnership with WinStar Farm.

“He’s going to be a part of the Paul Pompa estate dispersal in January, so we aren’t quite sure regarding the next step with him,” said Pletcher.

The Estate of Paul Pompa Jr., who died in October, also own Saturday’s Aqueduct Turf Sprint Championship winner Turned Aside, who is trained by Linda Rice. The family of the late owner was in the winner’s circle for both races.

“He was a terrific man and a great person to train for,” Pletcher said of Pompa. “We were all deeply saddened by his loss. It was emotional to see his family there, and it was great that they had a couple of wins.”