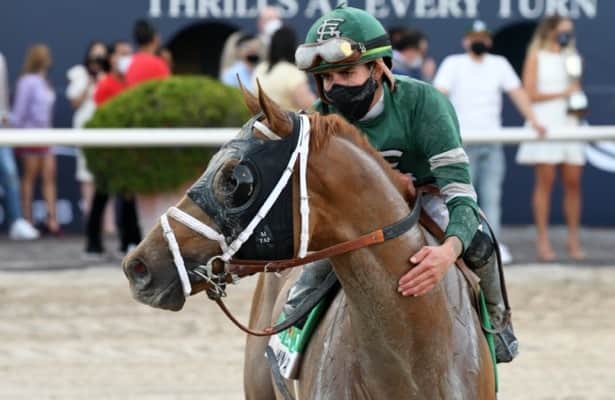 [RELATED – Belmont Stakes 2021: Odds and analysis for the 8-horse field]

"Todd is so experienced, and his horsemanship is an advantage," said trainer Doug O'Neill, who will saddle Hot Rod Charlie in the Belmont. "He runs a top-notch outfit and his horses all look great and they all run to the best of their abilities. Anytime a horse is connected to Todd, yes, it's an advantage."

The top seed in the Pletcher trio is St. Elias Stables’ Known Agenda, the Florida Derby (G1) winner. He might have faded from memory after he finished ninth in the Kentucky Derby. Five weeks later, Pletcher, who plays it close to the vest most of the time, is fairly gushing over what he has seen from Known Agenda.

“I think he is sitting on a very good race,” Pletcher said this week at Belmont. “I love the way he is training coming into it. And he has been touting his hand that he is coming up to it ready to give it his best.”

Known Agenda is the 6-1 fourth choice in the Belmont behind Essential Quality (2-1), Preakness winner Rombaeur (3-1) and Hot Rod Charlie (9-2).

The other Pletcher horses are long shots. Calumet Farms’ Bourbonic, who won the Wood Memorial at odds of 72-1 on April 3, is 15-1 on the Belmont morning line. Overtook, last seen finishing third in the Peter Pan (G3) on May 8, is 20-1. Overtook is owned by Repole Stable, St. Elias Stable, Michael B. Tabor, Mrs. John Magner and Derrick Smith.

If all three Pletcher horses get into the Belmont starting gate, it will make the 53-year-old Hall of Famer the all-time leader in horses started in the Belmont. These three would give Pletcher 33 Belmont Stakes horses, two more than another Hall of Famer, Nick Zito.

Pletcher has had success in the final leg of the Triple Crown. Of the 30 horses he has started, he has won the Belmont three times: Tapwrit (2017), Palace Malice (2013) and the filly, Rags to Riches (2007). He has finished second six times and third with three other horses.

Known Agenda figures to be the best chance for Pletcher to get his fourth Belmont win. In the Kentucky Derby, he drew the dreaded rail. If he was going to do some good in the Run for the Roses, Known Agenda and jockey Irad Ortiz Jr. were going to have to get a solid position early. It didn’t happen.

“There was a critical point at the eighth pole going by the stands for the first time and he was this close to getting the position he wanted.” Pletcher said. “We didn’t make that spot and he was shuffled back to 18th or 19th. I am not saying that was only because he was in post 1; it could have happened from a different post, too.”

Despite getting shut out of the spot he coveted, Known Agenda kept grinding, kept trying. He wasn’t going to win the Derby, but he didn’t pack it in.

“I think he ran a sneaky good race,” Pletcher said. “He was one of the few that was finishing. Unfortunately, he got to the quarter pole with too much to do.”

Known Agenda has had five weeks to recover from the Derby and has three published works since, all at Belmont. The most recent was a five-furlong breeze on Friday, when he went in 1:01.

Known Agenda has three wins in seven career starts, 2-for-4 this season. After a dismal showing in the Sam F. Davis (G3) at Tampa on Feb, 6, Pletcher put blinkers on the son of Curlin and he responded with an 11-length win in an allowance optional claimer at Gulfstream Park on Feb. 26.

If Known Agenda is going to be a major player in the Belmont, he is going to need a solid pace up front. How fast?

“I would like 45 (seconds) and change,” Pletcher said with a laugh. “I hope they go 47, 48 and change. I would not expect anyone would be sending, but if there are two or three concerned about letting another one get away, it should keep everyone honest.”