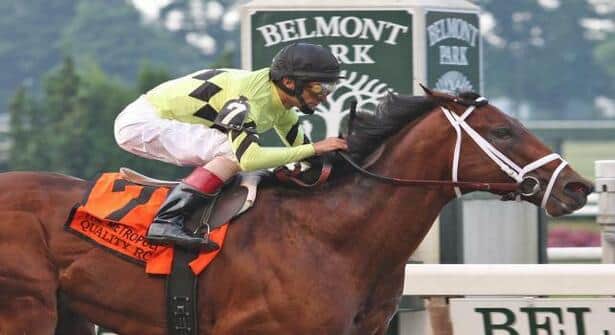 Members of the “Todd Squad” continued their preparations for the Breeders’ Cup at Churchill Downs on November 5 and 6 as several turned in workouts over Belmont Park’s training track this weekend.

Quality Road, Todd Pletcher’s hopeful for the Breeders’ Cup Classic, breezed six furlongs in 1:13.46 as he continues to build stamina in the lead up to the 1 ¼-mile race, which will be his first start following an easy victory in the Grade 1, 1 1/8-mile Woodward on September 4.

“We’re running 1 ¼ miles off a little bit of a layoff, so we want to make sure we have him fit enough,” said Pletcher said of the Edward P. Evans homebred. “He finished strongly and galloped out well, which is what we wanted.”

Grade 1 Three Chimneys Hopeful runner-up Stay Thirsty, who will be joining fellow Repole Stable representative and Grade 1 Champagne winner Uncle Mo in the starting gate for the Juvenile, covered five furlongs in 1:00.27 in the second quickest of 28 moves over the course and distance.

“We were looking to get a good, solid five-eighths into him,” said Pletcher. “He galloped out strongly, and we are pleased.”

Joining Quality Road and Stay Thirsty on the training track Sunday morning were Paul Pompa’s Turf Sprint contender Rose Catherine, who breezed four furlongs in 48.27, and Derrick Smith’s Bribon, who traveled five furlongs in 1:00.46 and is under consideration for either the Sprint or the Dirt Mile.

Life At Ten and Malibu Prayer, both probable starters in the Ladies’ Classic, turned in separate works on Saturday, and Pletcher expressed satisfaction with their progress.

Winner of four graded stakes this year, including the Grade 1 Beldame on October 2 last time out for owner Candy DeBartolo, Life At Ten breezed four furlongs on the training track in 49.90

“That was Life At Ten’s first workout since the Beldame, and she looked good,” said Pletcher.

Malibu Prayer, an Edward P. Evans homebred who captured the Grade 1 Ruffian Handicap at Saratoga on August 1 and was second as the beaten favorite in the Grade 2 Molly Pitcher at Monmouth Park on August 29 most recently, traversed five furlongs in 1:01.26.

“I thought she worked well and galloped out strongly,” said Pletcher.

Flatter: Hank ‘The Hammer’ Goldberg was all about friends
It was about 2 1/2 years ago when I last saw Hank...

Barn Tour: Motion on what's next for Spendarella, other talent
As he rattled off status updates on some of the pr...