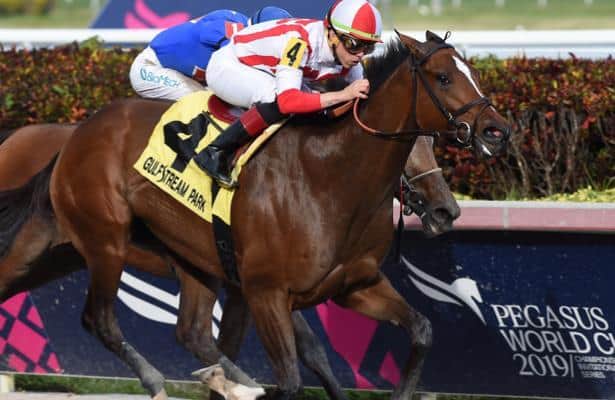 Unraced since turning in a sparkling career debut performance at Saratoga Aug. 12, the daughter of Violence was victorious in her stakes debut, repelling a relentless stretch challenge by Bye Bye J. to prevail by a half-length.

“I’m happy and relieved, because this horse I really didn’t have quite enough works into her where I really wanted to run her quite yet. But looking at the schedule and trying to hopefully get her on the Oaks trail, I figured if we don’t get her started this weekend it was going to be hard to get there,” trainer Chad Brown said. “We were a little short on works, but she showed her class and her ability to overcome it.”

The Brown trainee was sent to post as the 1-2 favorite in a field of nine fillies on the strength of her eighth-length romp in her debut. Away from the starting gate alertly, Feedback pressed the pace set by Fashion Faux Pas along the backstretch before taking the lead entering the far turn.

The Kentucky-bred filly opened a lead on the turn but was quickly joined to her outside by Bye Bye J. entering the stretch. Bye Bye J. continued to apply pressure through the stretch under John Velazquez, but Feedback responded to Irad Ortiz Jr.’s urging to earn a hard-fought victory.

“I got a good trip. She broke well and put me in a good position. She just waited for me to ask her to run and responded great,” Ortiz said.

“I looked at the fractions and she was right up on it which I expected but I thought he was very vulnerable the last sixteenth knowing that I was a couple works short. But she dug in and showed her class,” Brown said. “The way it turned out, she was able to dig in and get it done and I think she’ll get a lot out of it, fitness-wise.

"I’ll just have to evaluate how much time she needs to recover from this effort because she was quite tired when she came back.”

Bye Bye J. held second, a neck ahead of hard-charging Champagne Anyone and jockey Chris Landeros.

The Davona Dale (G2) at Gulfstream Park March 2 is a likely target for Feedback’s next start.

“I’d like to run her twice more before the Oaks. [The Davona Dale] would be the logical thing to do, so hopefully if she’s not too knocked out from this and it’s just a matter of getting the fitness she needed, she’ll be ready to go in four weeks,” Brown said. “But, if not, we’ll just wait a little longer.”