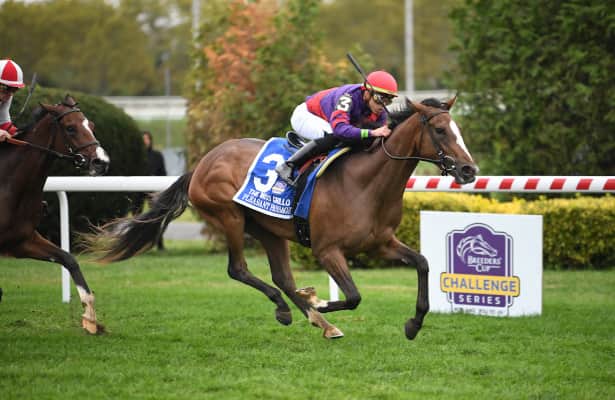 Pleasant Passage overcame rainy conditions and a yielding turf course to live up to her name in Saturday’s Grade 2, $200,000 Miss Grillo at Aqueduct Racetrack with a gate-to-wire three-quarter-length victory that could catapult her to the Breeders’ Cup on November 4 should her connections choose to go.

Contested at 1 1/16 miles for 2-year-old fillies on the inner turf course during the Belmont at the Big A fall meet, the Miss Grillo was a Breeders’ Cup "win and you’re in" event for the $1 million Juvenile Fillies Turf at Keeneland.

A surprise 15-1 winner as a first-time starter on Aug. 21 at Saratoga Race Course for Hall of Fame trainer Shug McGaughey, Emory Hamilton's homebred Pleasant Passage again flew under the radar in the Miss Grillo despite attracting the services of meet-leading rider Irad Oritz, Jr. Sent off at odds of 9-1, the More Than Ready filly was a distant fourth choice in the wagering but immediately made her presence felt as she broke alertly and showed more early speed than in her debut when she settled more than a half dozen lengths off the pace and closed along the hedge at the Spa to prevail.

“She ran well in her first start from a little off the pace coming up the rail. She was very professional,” said McGaughey. “Today, there wasn’t any speed in the race and she had trained sharp off her last race. Irad let her do her thing when she broke and he rode a good race on her.”

Her instant tactical advantage in the Miss Grillo was then amplified as she was allowed to set reasonable splits of 23.81 seconds for the opening quarter-mile and 49.77 for the half before backing the pace down further to 1:14.98 for three-quarters, with only trainer Chad Brown’s Free Look applying token pressure to her outside as Georgees Spirit sat in third and race favorite Be Your Best took up position in fourth.

At the top of the stretch, Pleasant Passage and Free Look separated from the remainder of the field of six, and although Free Look was a dogged pursuer of the pacesetter through the ample Big A stretch, she could make up no ground as Pleasant Passage dashed to the wire first, a three-quarter-length winner in a time of 1:45.25.

“There wasn’t too much speed in the race and I knew if I could be in front that would be good for me,” said Ortiz, Jr. “It worked out well because I made the lead easily. On the backside, she was nice and relaxed. When I asked her to go, she responded and she was there for me.”

The win was Pleasant Passage’s second from two career starts. The bay filly returned $21.20 on a $2 win wager and boosted her earnings to $167,750.

The Klaravich Stables color-bearer Free Look had to settle for second, two lengths clear of P.G. Johnson winner Be Your Best in third, who couldn’t make any appreciable ground on the top two in the stretch.

“It was a real good effort,” Brown said of Free Look. “Obviously it was an easy pace in front of us, but we didn’t have any excuse. We had dead aim the whole way. I’m real happy with the filly’s effort. I’ll probably go on to the next one (Breeders’ Cup Juvenile Fillies Turf) if she comes out of this OK. Now that I have five weeks in between races, a little bit more time would benefit her.”

Stretch-out sprinter Alluring Angel closed to get fourth, and was followed home by Im Just Kiddin and Georgees Spirit.