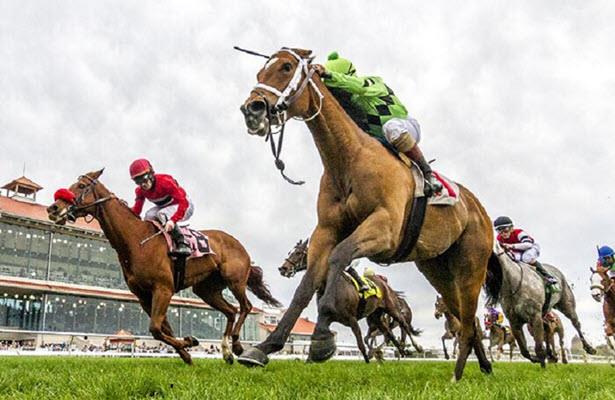 After breaking alertly from post 11, Klein Racing’s Play On spied the speed, took command at the top of the stretch and held off the relentless rally of Hotshot Anna to take the $75,000 Mardi Gras Stakes by a diminishing head.

The final time for the 5 ½-furlong journey over a firm Fair Grounds turf course was 1:03.99. It was 1 ¼ lengths further back to Eyeinthesky in third. The lukewarm 5-2 favorite Unbridled Class checked in fourth.

Winning trainer Brad Cox scratched the morning line favorite Break Even, also owned by Klein Racing, but Play On (4-1) was able to carry the lime, black diamond belt and black chevrons into the winner’s circle.

In three previous stakes appearances at the current Fair Grounds meet, Play On posted a win and two seconds. She just missed by a head to Hotshot Anna in the Richard R. Scherer Memorial Stakes in November, returned to score in the Pan Zareta Stakes in December, and most recently she was seen finishing second to the longshot Unbridled Class in the Nelson J. Menard Stakes on January 25.

Now a three-time stakes winner, the four-year-old daughter of Country Day boosted her career record to 10-5-2-0 with earnings of $212,883.

“She’s so tactical she makes my job easy,” jockey Shaun Bridgmohan said. “I knew Hotshot Anna was going to be there at the wire. She always puts that run in and you have to respect her for that but I’m just happy we were able to get there today.”

“She’s a nice filly,” said Brad Cox’s assistant trainer Ricky Giannini. “She always put her best effort in and is always right there at the finish. Shaun and I talked about sitting off the pace today and it worked out perfect for us. She got a really good trip.

"Maybe Keeneland’s Giant Causeway (April 11) or the Unbridled Sidney Stakes at Churchill Downs will be next.”

Hotshot Anna was eliminated at the break in the Nelson Menard Memorial Stakes last out, finishing eighth and ending a five-race win streak in the process. She bounced back in a big way on Saturday. The second place effort leaves the 6-year-old daughter of Trappe Shot less than $30,000 shy of $1 million in career earnings.

“She gave it her all,” jockey James Graham said. “I thought I got there but evidently I did not.”