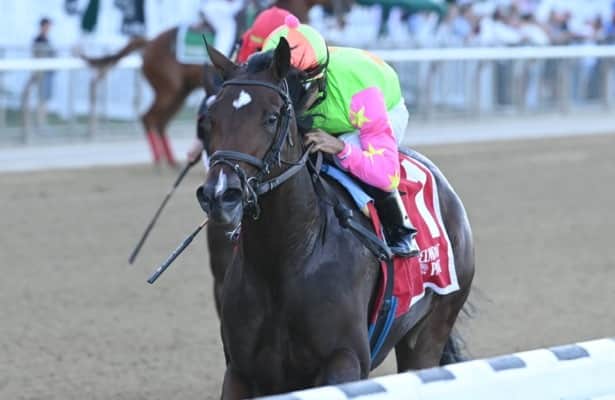 Trainer Rudy Rodriguez did not get the result he wanted from Bella Sofia in Saturday’s Breeders’ Cup Filly & Mare Sprint at Del Mar but said he was nevertheless happy with how she emerged from her fourth-place finish.

“She looked good and came back good,” Rodriguez said. “It was a very tough trip. I knew it was going to be tough when we drew the outside (post 5). I didn’t want to draw the outside. In the next couple of weeks, we’re going to talk about her future plans. Maybe we’ll send her back to the farm or maybe we’ll keep her here. I’m not sure what we’re going to do yet, but she seems good.”

The sophomore daughter of Awesome Patriot captured much attention following a superb score in the Test (G1) on Aug. 7 at Saratoga Race Course and replicated her winning effort when taking on elders next out in the Gallant Bloom (G2) on Sept. 26 at Belmont Park.

Not all was lost for Rodriguez last weekend, however. At his Belmont Park home base, Doctor Jeff captured the $100,000 Atlantic Beach going six furlongs over the inner turf. The chestnut juvenile son of Street Boss notched his first stakes win in his fourth career start when commanding through every point of call to win by three lengths.

Doctor Jeff, a dual surface winner, secured a victory on debut in the same frontrunning fashion on July 10 over a Belmont main track rated good en route to a distant fifth as the favorite in the Saratoga Special (G2) on Aug. 14.

“He ran a big race. Since Day One we liked him a lot,” Rodriguez said. “It was nice to see him do what he did. When you win those kinds of races, it’s always good.”

Rodriguez expressed delight in a runner-up effort from J.W. Singer’s Magic Circle in the $150,000 Tempted on Friday afternoon. The chestnut juvenile daughter of Kantharos stalked the pace from second and made up ground to finish a half-length behind the winner Gerrymander.

“I am very, very happy with what she did. She always showed signs that she could compete with that level,” Rodriguez said. “I thought we could have got there, but the other filly [Gerrymander] is a nice filly. We’ll talk to the owners about it, but we’ll definitely nominate her for the Demoiselle. I hope she can improve a little bit. She has the quality and the size to be a good filly.”

Going off at double digit odds in all three starts, Magic Circle lit up the tote board at 25-1 in her Sept. 5 maiden victory at Saratoga before finishing fourth in the Frizette (G1) at Belmont.

Rodriguez added that E.V Racing Stable’s Bali’s Shade will likely target the $100,000 Key Cents on Nov. 21 at Aqueduct. The New York-bred son of Bal a Bali broke his maiden at second asking on Oct. 22 at Belmont Park.