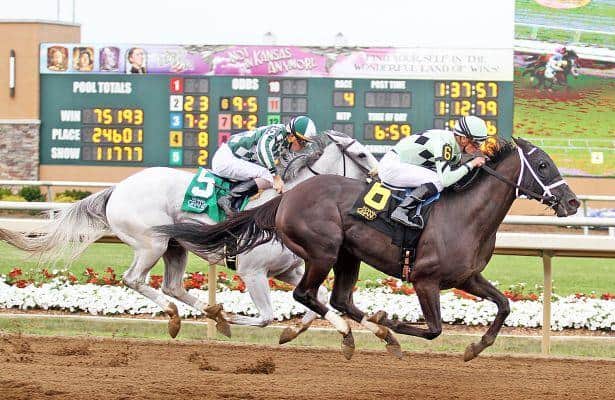 Richard Klein’s Pinch Hit might not have knocked it out of the park but the 4-year-old filly was safe at home, capturing Saturday’s $100,000 Mari Hulman George Stakes by three-quarters of a length over Awestruck.

Pinch Hit and front-running Awestruck hooked up coming out of the far turn, but Awestruck looked like she might have put away the race in mid-stretch. However, Pinch Hit and Julien Leparoux from the outside came back on to wear down Awestruck while finishing 1 1/16 miles in 1:43.92. She paid $5.60 to win as the 9-5 favorite in the field of six. Dutch Parrot, at 23-1 the longest shot in the field, closed to finished another 3 1/4 lengths back in third, edging Torrent and Summer Luck, with Promise of Spring rounding out the field.

“We went slow the first part of the race, and we came head to head at the quarter pole — knowing that we just keep going together,” Leparoux said. “Gosh, she fought back on me. About the sixteenth pole, my filly started to go ahead, and she won the race. So that’s good. But it was a good battle in the stretch.”

Said Klein: “I thought on the turn, we were the winner. Around the eighth pole, I thought the other one had a little more left. Then when I saw Julien get after her, I thought she had a lot left. He said she galloped out great.”

“We had the perfect trip,” Hernandez said. “Pinch Hit’s a stakes-winner, and she was able to just out-grind us late. This filly is getting better and better each race. You’ve got to be proud of her. She ran hard.”

Trained by Brad Cox, Pinch Hit now is 5-3-0- in 13 starts. In two prior starts this year, she was fourth in Churchill’s Grade 3 Winning Colors and a close second in a mile allowance race. Klein said her next start is likely to be Ellis Park’s Aug. 12 Groupie Doll, a Grade 3 stakes at a mile that Cox won last year with Mari Hulman George winner Tiger Moth.

The daughter of Harlan’s Holiday is special to Klein.

“This is the horse that won the day before my dad died,” he said of Bert Klein, a Louisville banker and philanthropist who bred and raced horses with his wife, Elaine, and their son. “He’s buried with the silks from that race, buried with a picture of her winning. Then she won an allowance race at 19-1 on my mother’s birthday. This is part of the broodmare band one day. I’m not letting her go.”

Klein also bred the winner of the race preceding the stakes, with the gelding Pitch Count taking an allowance race with an option $25,000 claiming price (for which he was entered and indeed claimed). Both Pinch Hit and Pitch Count are out of the Klein mare Change Up.