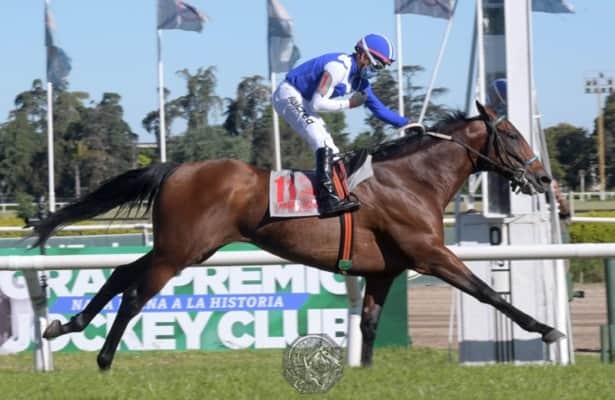 The Breeders’ Cup Challenge is an international series of stakes races whose winners receive automatic starting positions and fees paid into a corresponding race of the 2021 Breeders’ Cup World Championships, which is scheduled to be held Nov. 5-6 at Del Mar Thoroughbred Club in Del Mar, Calif.

As a part of the benefits of the Challenge series, the Breeders’ Cup will pay the entry fees for the winner of the Gran Premio Internacional Carlos Pellegrini to start in the 1½-mile Breeders’ Cup Turf. Breeders’ Cup also will provide a $40,000 travel allowance for all starters based outside of North America to compete in the World Championships. The Challenge winner must be nominated to the Breeders’ Cup program by the pre-entry deadline of Oct. 25, 2021 to receive the rewards.

The Gran Premio Internacional Carlos Pellegrini, which was first run in 1887, is the first Breeders’ Cup Challenge Series race of the 2021 season.

Owned by Haras Don Teodoro and trained by Jorge Mayansky Neer, Pinball Wizard won two Group 1 races in October, among his four wins in nine starts on turf. A dark bay son of Orpen out of Pink Pony by Pure Prize, Pinball Wizard scored a half-length victory in the 1½-mile Gran Premio General San Martin on Oct. 3 at Palermo and improved on that performance Oct. 31 when he dominated the 1½-mile Copa de Oro – Alfredo Lalor at San Isidro, crossing the wire 5 lengths in front in 2:25.34.

As he was in his last two wins, Juan Cruz Villagra has the mount on Pinball Wizard, breaking from post seven.

Due to the effects of the COVID pandemic on racing in Argentina, Egalite de 9’s Tetaze will be making his first start since his biggest career score in March, when he won the 1¼-mile Gran Premio Latinoamericano (G1) at San Isidro by 2 lengths over a heavy course. Trained by Roberto Pellegatta, Tetaze, a bay son of Equal Stripes, will try to improve on his fifth-place finish in last year’s Carlos Pellegrini. He will be ridden by Gustavo Calvente from post 11.

Haras El Angel de Venecia’s 6-year-old Village King, a bay son of Campanologist out of the Pleasant Tap mare Villard, has enjoyed success in both Argentina and in the United States during his 15-race career. Trained by Carly Etchechoury, Village King won three races in Argentina and finished third in the 2017 Carlos Pellegrini. He spent the following two years in the U.S. under the care of trainer Todd Pletcher, making eight starts. He won the Red Smith Stakes at Aqueduct in 2018 and finished third in the 2019 Pan American Stakes (G3) at Gulfstream Park.

After an eighth-place finish in the Man o’ War (G1) at Belmont Park in May 2019, Village King was returned to Argentina and was back racing Oct. 10 of this year, winning the 1½-mile Progreso (G2) at San Isidro, going wire-to-wire in an eight-length victory. In his last start, the 1½-mile Copa de Oro, he gained the lead into the stretch, but was no match for Pinball Wizard, finishing five lengths behind the winner. Village King will be ridden by Brian Enrique from post three.

Trainer Alfredo Gaitan Dassie has saddled five winners of the Carlos Pellegrini. This year he is starting six-time Group stakes winner Emotion Orpen, who took the Dardo Rocha Internacional (G1) at 1½ miles by 2½ lengths at La Plata on Nov. 19. Owned and bred by Haras Firmamento, Emotion Orpen, who is a 5-year-old son of Orpen out of the Distorted Humor mare Unavailable, also won the 1 3/8-mile Organizacion Sudamericana de Fomento (G3) by eight lengths at La Plata on Oct. 20. Emotion Orpen will be ridden by Francisco Fernandes Goncalves from post position nine.

Making the leap from listed company to Group 1 competition is Las Canarias’s undefeated 4-year-old Rohit Joy. A bay son of Fortify out of Stormy Rose by Bernstein, Rohit Joy made his first start Sept. 11, and reeled off four consecutive wins at Palermo as the favorite each time for trainer Juan Saldivia. His last win was a nine-length triumph in the 12-furlong Minstrel on Nov. 26. Juan Noriega has the mount, breaking from post eight.

Gaitan Dassie is also saddling the 3-year-old Cool Day, a chestnut son of John F Kennedy, who was a fast-closing second in the Jockey Club (G1) at 1¼ miles on Oct. 31 at San Isidro in just his third start. He will be ridden by Eduardo Ortega Pavon from post six.