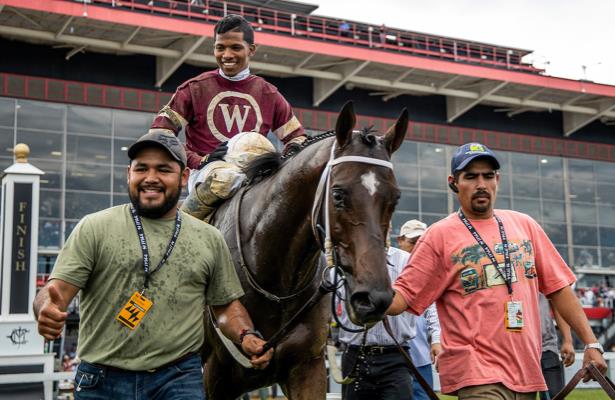 By splitting horses in the stretch and going on to win last Friday’s Pimlico Special (G3), Tenfold opened a number of prestigious options to continue his first season as an older horse.

The race came third off the layoff following a close-up fourth at Fair Grounds and a seventh in the slop in the Oaklawn Handicap (G2), for which the son of Curlin drew the rail.

“I think it was just a case of getting circumstances that not necessarily favored him, but just weren’t against him,” said David Fiske, racing manager for owner Winchell Thoroughbreds. “You throw (the Oaklawn Handicap) out and you go on to Pimlico, where the weather’s great, he’s had two races, and he runs a big race.”

Under Ricardo Santana Jr., Tenfold rallied from 12th of 13 into the first turn, later becoming part of a tightly bunched battle at the top of the stretch. He went on to complete 1 1/4 miles in a winning time of 2:02.36.

“It’s not magic,” Fiske said. “He’s a fit horse now. He’s run a couple times, and he showed the type of quality and ability he has.”

Fiske said Churchill Downs’ June 15 Stephen Foster (G2) will be the first consideration with Tenfold stabled back under the Twin Spires.

Quip, who won the Oaklawn Handicap, is probable for the 1 1/8-mile Stephen Foster along with Grade 1 winners Yoshida and Seeking the Soul. While the race was relegated to Grade 2 status this season, the Foster retained its “Win and You’re In” Breeders’ Cup Classic bid.

“It appears from his past performances he prefers or runs better if he gets some spacing between his races,” Fiske said.

Connections may look elsewhere knowing Tenfold has run better races — such as his third in the 2018 Preakness, and a win in the Jim Dandy (G2) — given five weeks or more to recuperate.

The Jim Dandy score came at Saratoga, which cards the Whitney (G1) on Aug. 3 and the Woodward on Aug. 31.

“But if he thrives at Churchill the next few weeks, maybe the Stephen Foster,” Fiske said. “But that might just be coming back a little too quick for him.”

"Iit’s a very special win with a homebred for Winchell that came through [my] mom and dad’s program in Laredo," Asmussen said after the Pimlico Special. "He just -- he’s got it in him. He’s got it in him and you see him today. Ricardo was talking about he’s got a lot of horse under him, but when he makes the lead, the addition of blinkers has kind of gotten him a little more serious in his training and hopefully this horse is going to have a huge rest of the year.

“The sky is the limit for him. I don’t think he’s really laid his body down yet. He’s a sound horse and everything in the pedigree gets better with age.”