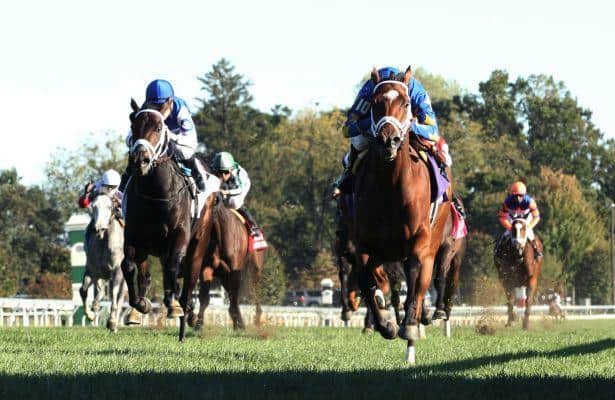 Photo Call’s record includes a win in the 1¼-mile Rodeo Drive (G1) at Santa Anita, a fifth-place finish in the Breeders’ Cup Filly and Mare Turf (G1) at Keeneland and a sale for $3 million at Keeneland’s 2015 November Breeding Stock Sale.

At odds of 29-1 in the First Lady, Photo Call and jockey Kent Desormeaux took early command of the race and at one point had a 10-length lead. Champion Tepin began her rally down the stretch but could not catch Photo Call, who won the race by 2-¾ lengths in 1:35.62, 1.42 seconds faster than Miss Temple City’s time two races later in the Shadwell Turf Mile (G1).

“The instructions were to cover her up,” Ginny DePasquale, assistant to trainer Todd Pletcher, said. “So when I saw them out front, I thought, ‘Oh, jeez.’ I guess he kind of faked everybody out. I think everybody thought she was going to back up. She’s a game filly. A mile just hit her right between the eyes.”

DePasquale said immediate plans for Photo Call would be determined.

Tepin is scheduled to defend her title in this year’s Breeders’ Cup Mile (G1) held this year at Santa Anita on Nov. 5.

“We will probably do as we have always done and ship in as late as possible,” Casse said.

Phaedrus Flights’ Celestine also was fine the morning after her third-place finish, said Riley Mott, assistant to his father, trainer Bill Mott. Her future is to be determined, he said. Celestine is cataloged to Keeneland’s November Breeding Stock Sale, which begins Nov. 8.

Fourth-place finisher Nemoralia came out of the race well and also could be headed to the Breeders’ Cup, according to trainer Jeremy Noseda.

“I was very happy with her race,” Noseda said of the 3-year-old filly who is owned by Peter Brant and Joseph Allen. “She is going to go to a nearby farm for a bit of freshening.

“I’ll get with the owners midweek (about the Breeders’ Cup), but the filly will tell us. The horses always have all the answers.”

Qatar Racing’s Now Or Never (IRE), who finished eighth, will remain at Keeneland and point to the $150,000 Pin Oak Valley View (G3) for 3-year-old fillies going 1 1/16 miles on the grass on Oct. 21 according to David Hayes, exercise rider for the Michael O’Callaghan-trained filly.