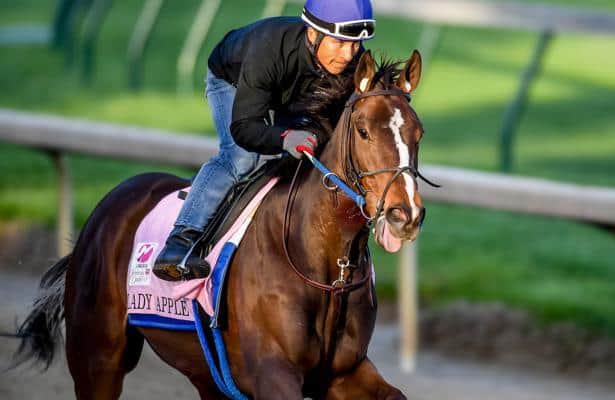 “I’m in Australia and Europe as much as I’m in America,” he said, with five runners scheduled to compete later this month at Royal Ascot. “We’ve got horses everywhere.”

The biggest of them, Gronkowski, is freshening up after a narrow defeat to Thunder Snow in the Dubai World Cup and could be headed back to the U.S.

In terms of domestically based runners, Phoenix Thoroughbreds is looking forward, especially with Lady Apple, the Grade 3 winner who ran third last out in the Kentucky Oaks.

“She’s done so well for us,” Ludt said. “We want to protect her, because we plan on racing her as a 4-year-old. But we’d love to see her run some good races here in the fall and think about the Breeders’ Cup.”

The Steve Asmussen-trained daughter of Curlin may resurface in either Belmont Park’s June 29 Mother Goose (G2) or the July 5 Iowa Oaks, both races Asmussen won in 2018.

Lady Apple failed to break her maiden in four starts as a juvenile but returned to open her 3-year-old season with three straight wins, taking Oaklawn Park’s Fantasy Stakes (G3) to punch her ticket to the Oaks.

“He backed off her a little bit just because she’s done a lot,” Ludt said of Asmussen. “She’s done very well — had a long campaign — and she’s done great. We didn’t want to push her into the Acorn,” the one-mile Grade 1 race run Saturday on the Belmont Stakes undercard.

In terms of 3-year-old males, Phoenix is sent Captain Von Trapp, another trained by Asmussen, out for a second-place finish in Friday’s Prairie Mile. There were hopes that grass runner Magnificent McCool could go on to New York’s new Turf Triple Series, but he ran sixth last weekend in a local prep for it, the Pennine Ridge (G3).

“He did get bumped around, but he didn’t get bumped around enough to run that bad,” Ludty said. “We’re going to put him in an allowance race, hopefully get his confidence back and see if he’s good as I think he is.”

“We’re an investment fund, so last year when she was undefeated and we were going into the Breeders’ Cup Filly & Mare Sprint, the theory was, (founder and CEO Amer Abdulaziz) really wanted to show the world,” Ludt said. “We could win that race, flip her in the sale, and at that point, she’d never be worth more. We thought we had the whole world in front of us.”

The 4-year-old daughter of Uncle Mo, who’s trained by Bob Baffert, suffered an entrapped epiglottis in her final breeze toward the Breeders’ Cup, missed the race and didn’t hit the board in two subsequent starts.

“She just didn’t seem to be firing right,” Ludt said, “so we’re going to give her a break and decide whether we’re going to bring her back or just breed her.”