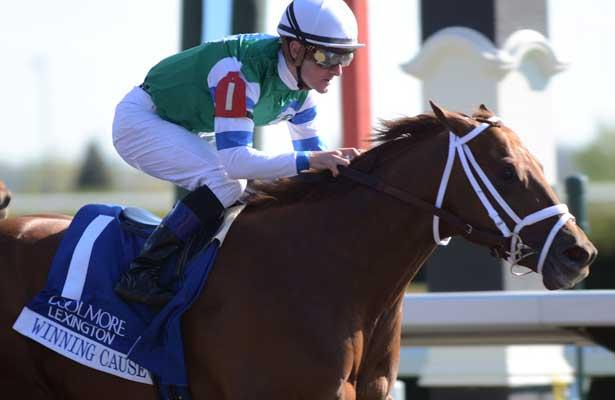 Alto Racing’s Winning Cause, undefeated in three career starts at Keeneland and winner of this spring’s Coolmore Lexington (G3), and Iowa Sprint winner Gentlemen’s Bet headline a field of 14 and one also-eligible entered Tuesday for Friday’s 161st running of the $200,000 Stoll Keenon Ogden Phoenix (G3).

Trained by Todd Pletcher, who ranks second all time at Keeneland in stakes victories with 38, Winning Cause has not run in a one-turn race since an allowance victory here in April prior to his victory in the Coolmore Lexington. Garrett Gomez has the mount on Winning Cause, who will break from post position 14.

Harry Rosenblum’s Gentlemen’s Bet has won five of seven career starts and followed his victory in Iowa with a third-place finish in the Alfred G. Vanderbilt (G1) at Saratoga in his most recent start. Trained by Ron Moquett, Gentlemen’s Bet will be ridden by Mike Smith and break from post position seven.

Trained by Tom Amoss, Sum of the Parts enters the race off a nearly four-month layoff. Leandro Goncalves has the mount Friday on Sum of the Parts, who will break from post position 11.

Trained by Graham Motion, Hoofit returns to the scene of his most recent victory that came in the 2011 Stoll Keenon Ogden Phoenix by a nose. Never worse than third in four 2013 starts, Hoofit will break from post position nine and be ridden by Edgar Prado, who was aboard for the 2011 victory in the race.

Hogy, trained by Wayne Catalano, enters the Stoll Keenon Ogden Phoenix on a two-race win streak with scores in the Presque Isle Downs Mile and Troy Stakes at Saratoga. In May, Hogy won the Grade 3 Hanshin at Arlington. Hogy will break from post position 12 and be ridden by Joe Rocco, who has been aboard for the past two victories.