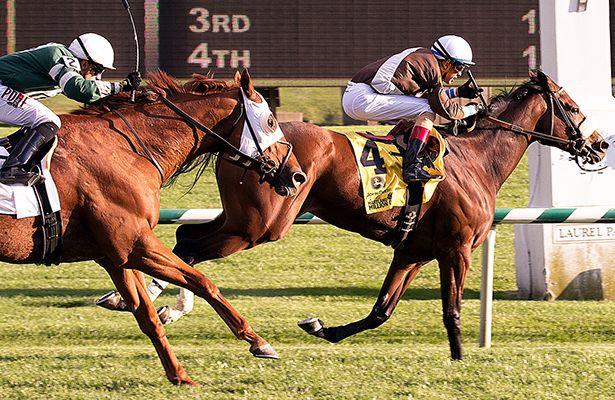 Phlash Phelps almost pranced into the winner's circle at Laurel Park Saturday afternoon after his victory in the $125,000 John Deere Maryland Million Turf. Despite having to dig in down the stretch of the one-mile race to put away Roadhog, a two-time Turf winner, Phlash didn't break a sweat.

His perfectly configured body was dry and relaxed as he posed under jockey Victor Carrasco for their victory photo.
The win was the fourth straight for Phlash Phelps, the son of Great Notion, and the first for Carrasco since returning from a six-week layoff due to a broken hand.
"The same thing happened in the stretch the last time he raced Roadhog," said Carraso, describing how his horse had taken the lead in the second turn only to see Roadhog come back to reclaim the lead at the top of the stretch to win by three-quarters of a length. "My horse looked beat but came back [down the stretch]. It feels awesome to be back in the winner's circle. I don't know how to explain him. I think he's just really game. Every time a horse gets near to him he fights back. He's just a nice horse."
Bred by Carol A. Kaye, owned by Hillwood Stables LLC and trained by Rodney Jenkins, Phlash Phelps has been a work in progress.
Purchased for Hillwood Stables by Jenkins because of his "good looks and correctness", the 4-year-old didn't win a race until this spring.
"He's a very smart horse," Jenkins said. "I always had high hopes for this horse, but he had a lot of nagging problems as a 2- and 3-year- old. Then, all of a sudden, he came around and he became much braver -- even in his workouts, like the way he jumped back in to his bridle after that other horse passed him down the lane. I thought, 'We will see what he's made of today.'"
Jenkins laughed, remembering what his horse was like before he won his first race, April 28.
"He was leading me down a bad path - or I was leading him down a bad path," Jenkins said. "I don't know which. But we just gave him time, took the blinkers off and let him be himself. You see how he is now. He's fit and just running smooth, like a pro athlete. Relaxed and doing it easy."

Phlash Phelps, the 9-5 favorite in a field of 10, ran the mile on turf in 1:35.35. Roadhog finished two lengths ahead of third-place finisher A P Elvis.