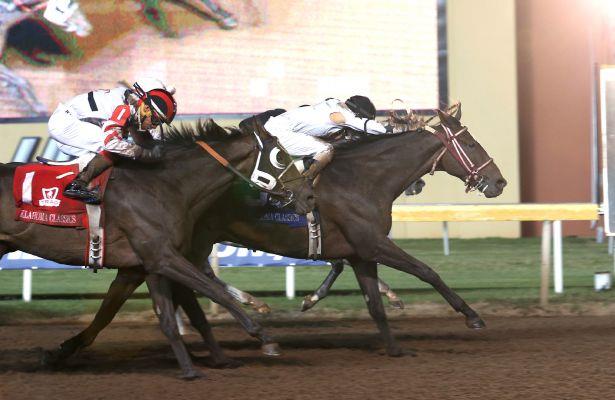 Imahit came into the $169,250 Oklahoma Classics Cup as the heavy favorite at 4-5 odds, seeking his third career win in the race. However, after scorching the track with blistering fractions for six furlongs, the 7-year-old gelding gave way. A group of five came flying down the stretch together with Phantom Trip emerging with victory.

Owned by Lester Ellenz of Tipton, Kan. and trained by Clinton Stuart, Phantom Trip was ridden with confidence by David Cabrera as he waited for Imahit to come back to the field in the richest race on the million-dollar night of stakes events that is the Classics for Oklahoma-breds at Remington Park.

Imahit drew clear and led by an astounding 10 to 15 lengths midway along the backstretch. He stopped the timer for fast quarterly fractions of :23.27 for the opening quarter-mile; :45.75 for a half-mile; then 1:09.83 for three-quarters of a mile. Imahit began to retreat at the top of the stretch and was passed inside the final sixteenth of a mile.

Phantom Trip was the best of the group that engulfed Imahit, getting up to win by a neck over Z Rockstar who led briefly in the final 100 yards before getting caught in the final strides. Gospel Abe was another head behind in third with Tuff Kid a neck back for fourth. Rage Riot was a half-length behind Tuff Kid in fifth. Imahit finished sixth, two lengths from the winner. The remaining order of finish was Hyper Drive (7th), Royal Lion (8th), Lingerlonger (9th) Ted’s Folly (10th) Mustang Eddie (11th) and Air Assault (12th).

Cabrera knew he had a chance by the way Phantom Trip settled beneath him in the Classics Cup, as the 3-year-old gelding continues to improve. “Today he relaxed really well and he just had a really big kick. I was feeling really good because he relaxed early on and I knew he would have a big finish.”

The win for Stuart is his 14th of the Remington Park season as he is enjoying one of his better campaigns here. He had the Classics Cup in his sights months ago and his patience with Phantom Trip has paid off. “We just kind of saved him all summer for this meet and it’s turned out great.”

The Classics Cup is the third consecutive win of the season for Phantom Trip and his fourth win overall form nine lifetime starts. Bred in Oklahoma by Center Hills Farm, Phantom Trip is a son of Summer Bird from the Petionville mare Nakayama Jeune. He was purchased by Ellenz at the 2014 OKC Summer Yearling Sale for $40,000.

The win in the Classics Cup is the first in the race for all of the connections. Stuart wins his first Oklahoma Classics stakes race since winning the Juvenile in 1997 with Pesky Rascal.