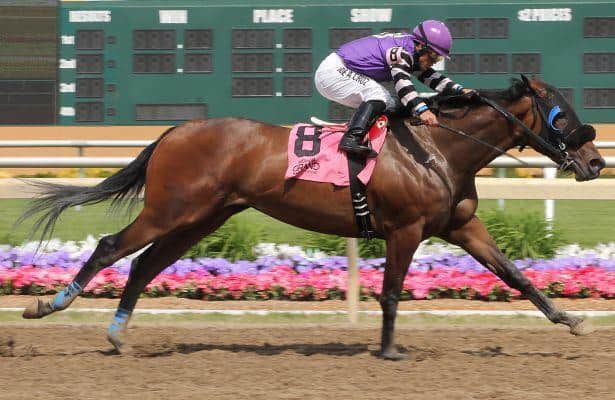 A new star emerged Wednesday, May 25 in the fourth running of the $100,000-added Swifty Sired Fillies Stakes at Indiana Grand. Peyton’s Pass, ridden by Fernando De La Cruz, rallied home in a new stakes record time of 1:10.54 for the win, her second straight at Indiana Grand Racing & Casino.

Peyton’s Pass began her journey from the outside post eight in the stakes race. De La Cruz opted to lay off the early pace and allow Easy Victory and Albin Jimenez to show the way. A blistering first quarter time of :22.03 seconds was recorded as Easy Victory found pressure from Carmalley Chrome and Rodney Prescott along with Text N Ride and Francisco Torres, who stayed between horses until the final turn.

Carmalley Chrome obtained the lead in the turn and was in position for a strong stretch drive when Peyton’s Pass moved to the outside and began to make up ground. Peyton’s Pass had the lead for most of the stretch and crossed under the wire for the win by a margin of one and one-quarter lengths over My Erin and Marcelino Pedroza, who scooted up the inside to save ground for second. Carmalley Chrome was third in the six furlong event.

“Because I rode the other filly (Easy Victory) last year, I knew she would show a lot of early speed, so I wanted the speed to clear and I wanted to try to get in a good position behind them,” said De La Cruz, who was the leading rider at Indiana Grand in 2014. “We were chasing them and stalking them and little by little, she started moving up. After the quarter, I asked her to keep going and she did and was able to save for the stretch.”

Peyton’s Pass is owned by Henry Mast’s Mast Thoroughbreds LLC and trained by Bob Gorham. The win was her second of the year in three starts and her first attempt against stakes company. The three-year-old daughter of Pass Rush was bred by Dr. Crystal Chapple and the win marked only her fourth career outing, getting one start in at the end of her two-year-old season, a commanding win by more than six lengths during the final week of the 2015 meet at Indiana Grand.

“We had her (Peyton’s Pass) ready to go last year but she had a little bit of a shin problem,” said Gorham. “But we were able to get one two-year-old start in her, which was pretty important for her three-year-old year. She prepped all winter at Mahoning Valley and we considered a stakes race there, but it came up pretty tough. We decided to bring her here to get her first starts in for this stakes race. Fernando (De La Cruz) rode a great race. He’s our stakes jockey.”

Gorham is based from his training center in Lawton, Mich., but currently has a string of 30 horses at Thistledown and 30 horses at Indiana Grand. He has fared well in Indiana over the past few years, conditioning numerous stakes winners. Peyton’s Pass is his latest start to step up and join the stakes group in his barn at Indiana Grand, but her journey to the races had a rocky start.

“This filly (Peyton’s Pass) was orphaned at 20 days old,” said Dr. Chapple, who owns an equine farm call service west of Crawfordsville and currently has a small breeding operation at her farm in Hillsborough, Ind. “She was raised out of a bucket. She was turned out with a Quarter Horse mare as a babysitter, who taught her some manners. Because she was raised on a bucket, she is very people oriented and has always been filled out and well developed. Bob bought her from me privately the fall of her yearling year.”

Peyton’s Pass now has three wins in four career starts and increased her bankroll to more than $100,000 with her win in the Swifty Sired Fillies Stakes. She also added her name to the record books by establishing a new stakes record time of 1:10.54, eclipsing the old mark of 1:10.82 set by Nevertoomanykisses and Oriana Rossi during the 2015 running of the race. Peyton’s Pass paid $7.00, $3.20, $2.80 across the board as the bettor’s third choice in the field.

It was the first test outside of Florida for Strong Composition and he proved he will be a major contender in the Indiana Stakes program for 2016. Ridden by Albin Jimenez, The three-year-old son of Mancini was a strong winner to win his first career stakes race in stakes record time in the fourth running of the $100,000-added Sagamore Sired Stakes Wednesday, May 25 at Indiana Grand Racing & Casino.

Starting from post eight, Strong Composition broke alertly and gained a stalking spot along the inside as Containment and Marcelino Pedroza set early fractions of :22.58 and :45.35 for the six furlong race. Derby Express and Malcolm Franklin chased the leaders early on and prepared for a move around the turn as they were joined by El Coco Loco and Eddie Perez in pursuit of the lead. Jimenez took an opportunity before the stretch to move Strong Composition to the outside so he would have a clear path to work with in the stretch.

Strong Composition found his stride as the field moved into the stretch. The chestnut colt rallied past his opponents with authority and opened up on the field to win by two lengths. Containment maintained his position for second over Derby Express, who held steady for third.

“I was able to jog this horse (Strong Composition) on Monday to get a little feel for him,” said Jimenez. “He’s a very nice horse. Tony told me in the paddock to try and stalk third or fourth and it worked out perfectly. We were able to move to the outside and he really excelled in the stretch.”

Strong Composition paid $7.20, $3.80, $2.40 across the board. The Indiana sired colt is now trained by Tony Granitz for Frank Bertolino’s Monarch Stables, Inc. based in Florida.

“This horse (Strong Composition) shipped 1,500 miles on Saturday and arrived here on Sunday,” said Granitz. “He was sent here from Gulfstream Park. He ran beautiful today. He’s a very athletic colt. Larry (Pilotti) had this colt in Florida and said to take the blinkers off because he had been hanging a little. I told him Albin would get him to finish strong. This was his first start against Indiana breds and he really finished well today.”

Granitz, who has been based for years in Chicago, recently purchased property close to Indiana Grand. Although he still has a string on the Chicago circuit, he manages a string at Indiana Grand and is in the process of building a home in Indiana. He plans to relocate his family to the area. Granitz had major success with Lady Fog Horn last season, who was named Indiana’s Horse of the Year for 2015.

The final time for the Sagamore Sired Stakes was 1:09.43 is a new stakes record. The previous mark was established in 2015 by Son of a Nut and Malcolm Franklin in a time of 1:10.06.