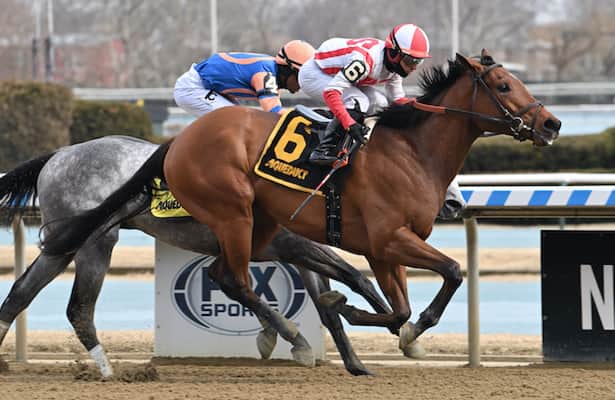 None of these sophomores qualified for the Kentucky Derby, although a few of them did race on the Derby trail. Running in the Peter Pan indicates that their connections are considering a start in the third leg of the Triple Crown.

In 2014, Tonalist won the Peter Pan and then went on to victory in the Belmont Stakes. Country Grammer, who is a son of Tonalist, was a winner of the 2020 Peter Pan and the 2022 Dubai World Cup in March.

Here is a full-field analysis for the Peter Pan with odds provided by the Horse Racing Nation staff. The Peter Pan is listed as race 9 of 11 on a card that includes a total of five graded stakes.

1. Set Sail (2-1 – Malibu Moon – Richard Mandella / Joel Rosario – 2: 1-0-1 - $48,240) Set Sail will ship from the West Coast for trainer Richard Mandella after breaking his maiden by more than seven lengths going a mile in his second career start on March 27 at Santa Anita. This seems like an unusual move for Mandella and one that indicates that he has confidence that this home-bred colt is ready to step up to graded stakes company. Interesting shipper.

2. Electability (3-1 – Quality Road – Chad Brown / Irad Ortiz, Jr. – 3: 2-0-0 - $90,100) Electability debuted as a 2-year-old at Saratoga in a two-turn turf race and finished seventh. After that he was off until March, when he broke his maiden at Aqueduct going a mile while pressing the pace. The following month, Electability won an allowance as the odds-on favorite. He was a $300,000 weanling purchase for Chad Brown, who won this race in 2017 and 2020. Top choice.

3. Complete Agenda (8-1 – Curlin – Todd Pletcher / Jose Ortiz – 5: 1-1-1 - $55,530) Complete Agenda needed five starts to break his maiden, which he did at Aqueduct last month going nine furlongs. On that day, the $250,000 yearling purchase stumbled at the start and rallied to beat a field of six. Before that, he raced in Florida at Gulfstream Park and Tampa Bay Downs. Impeccably bred, the son of Curlin is the first foal from a Grade 1 winning mare. Pletcher has won the Peter Pan four times, including last year with Promise Keeper. Use underneath.

4. We the People (4-1 – Constitution – Rodolphe Brisset / Flavien Prat – 3: 2-0-0 - $120,250) We the People spend the winter at Oaklawn Park, where he won his first two starts going a mile in a maiden race and then going 1 1/16 miles in an allowance. Both times the margin of victory was over five lengths after pressing the pace. In the Arkansas Derby (G1), he finished seventh behind Kentucky Derby horses Cyberknife, Barber Road and the Kentucky Oaks winner Secret Oath. Brisset moved We the People to Keeneland after the Arkansas Derby. He was washed out before his last start, so keep an eye on him in the post parade. Win contender.

5. Golden Glider (8-1 – Ghostzapper – Mark Casse / Dylan Davis – 5: 2-0-0 - $119,112) Golden Glider won his first two starts for Mark Casse with a maiden score at Woodbine going two turns followed by an allowance at Tampa Bay Down while racing from off the pace. His next three starts were on the Derby trail with a fifth in the Sam F. Davis (G3), fourth in the Tampa Derby (G2), and then another fourth in the Blue Grass (G1) at Keeneland. Use underneath.

6. Western River (6-1 – Tapit – Rodolphe Brisset / Luis Saez – 5: 1-1-1 - $73,377) Western River needed five tries to break his maiden, which was his second start at Oaklawn. As a 2-year-old, he raced three times at Ellis Park with two of them on the turf, including a second-place finish in September. He had five months off between his races at Ellis and Oaklawn. Like many sons of Tapit, Western River looks to be maturing with age and should appreciate the extra distance. Western River is a full-brother to the 2016 Belmont Stakes winner Creator. Live long shot.

7. Cooke Creek (15-1 – Uncle Mo – Jeremiah O’Dwyer / Manny Franco – 5: 2-1-1 - $102,050) Cooke Creek picked up two points on the Kentucky Derby trail when he ran third in the Jerome at Aqueduct. In February, he was no threat when finishing eighth in the Withers (G3) behind Early Voting and Un Ojo. Cooke Creek has been away from the races since then while training in Florida for Jeremiah O’ Dwyer. He began his career with two victories at Delaware Park in a maiden breaker and then in a stakes race going a mile. Toss.

8. State Planning (15-1 – Liam’s Map – Juan Vazquez / Trevor McCarthy – 4: 2-0-1 - $86,920) State Planning is a New York-bred who has four starts against state-breds. Based at Parx Racing, the grey son of Liam’s Map broke his maiden going a mile in his third try at Aqueduct by more than 13 lengths in March. Three weeks later, he again used a closing move to win an allowance race. The Peter Pan will be State Planning’s first start against open company. Toss.

SUMMARY: The Peter Pan has three horses who won the first two races in their careers – Cooke Creek, Golden Glider and We the People.  They are joined by five others who won their most recent start – three with a maiden victory and two in an allowance. Cooke Creek is the only stakes winner in the field.

That summary makes the Peter Pan look like a race where the choice is between horses who might be improving after recent victories and those who already have experience against tougher competition in stakes races on the Kentucky Derby trail.

I prefer the up-and-coming 3-year-olds like Electability, Set Sail, We the People, Complete Agenda and Western River over horses that did not distinguish themselves on the Derby trail. Electability is the top choice because he will race on his home track, where Chad Brown is winning at a 32 percent clip at the current Belmont Park meeting.