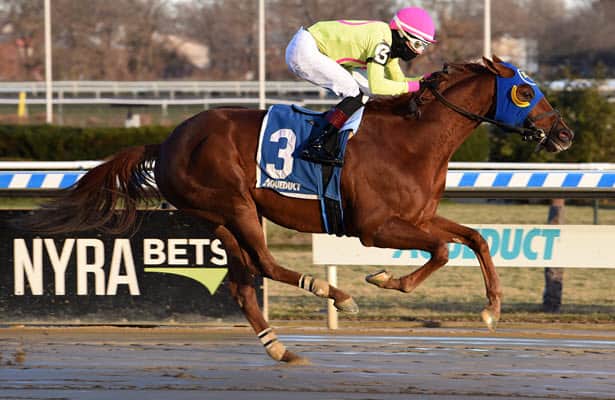 Graded stakes action kicks off at Aqueduct Racetrack for 2021 with a field of five assembling for Saturday's 128th running of the Grade 3, $150,000 Toboggan for 4-year-olds and upward going seven furlongs over the main track.

Trained by Rudy Rodriguez for owner Michael Dubb, the 8-year-old Pete's Play Call was claimed for $62,500 out of a winning effort in an optional-claiming sprint on Nov. 27 at Aqueduct. He made first start for new connections a winning one when capturing the 6 1/2-furlong Gravesend last out on Jan. 2 at Aqueduct.

Pete's Play Call was hustled out of the gate in the Gravesend by Jorge A. Vargas Jr. and sat to the outside of pacesetter Happy Farm. After establishing clear command approaching the quarter pole, Pete's Play Call held off a late charge from fellow Toboggan aspirant Stan the Man to win by 2 1/2 lengths over the muddy and sealed track.

“In his last four or five races, it looks like he’s improving a little,” said Rodriguez, who saddled Head Heart Hoof (2013) and Sassicaia (2016) to Toboggan scores. “He’s been doing great. We’re just trying to keep him happy and keep him fit. He really looks like he’s been coming along well and I hope that he stays the way he’s been doing. He worked very well the other day. He’s full of himself right now.”

The seasoned son of Munnings boasts the most victories in the Toboggan field with a 46: 14-9-6 lifetime record and earnings of $648,421.

Bred in Maryland by Mr. and Mrs. Charles McGinnes, Pete’s Play Call is out of the 2019 Maryland Broodmare of the Year Taft Lil Queen, who also produced graded stakes winner Kiss to Remember. He comes from the same family as dual Grade 1-winner Spun Sugar.

Vargas will return to the saddle from the inside post.

Long Lake Stable’s Stan the Man will attempt to turn the tables on Pete’s Play Call in search of a third stakes victory and first graded score for trainer John Terranova, who won the 2010 Toboggan with Wall Street Wonder.

The four-time graded stakes-placed Stan the Man arrives at Saturday’s event with consistent form, having finished in the money in his last five starts, all of which were at stakes level.

Prior to finishing a late-closing second in the Gravesend, the 7-year-old Broken Vow chestnut was a close second to Toboggan-rival Share the Ride in the Fall Highweight (G3) on Nov. 27 at Aqueduct.

Stan the Man enjoyed a prosperous campaign in 2020, which included a triumph in the seven-furlong Tale of the Cat at Saratoga and three placings against graded stakes company. At the tail end of 2019, Stan the Man notched his first stakes victory when taking the Queens County at Aqueduct going nine furlongs.

“He’s been a good horse and a fun horse for us, very consistent. Especially lately, since the summer,” Terranova said. “We’re proud of him. He’s happy and healthy and this looks like the right spot for him.”

The dark bay or brown son of Candy Ride won the Fall Highweight two starts back and arrives at the Toboggan off a close runner-up finish to Wendell Fong in the Fire Plug on Jan. 16 at Laurel Park.

Misty Hollow Farm’s 7-year-old Drafted will seek to get back to his winning form for trainer David Duggan. After a 2-year-old season with trainer Eoin Harty, the son of Field Commission raced for the barn of Middle East-based Doug Watson, for whom he won two Group 3 events at Meydan Racecourse in the winter of 2019. In his last effort, he finished third beaten 5 3/4 lengths in the Gravesend.

?Trained by Rob Atras and owned by Sanford J. Goldfarb and Irwin Goldfarb, the 6-year-old son of Power Broker won three races in a row during his 2019 campaign for trainer Linda Rice.

The Toboggan is slated as Race 4 on Saturday’s nine-race program, which has a first post of 12:20 p.m. ET.