Performer wins at Belmont off 11-month layoff; Cigar Mile next? 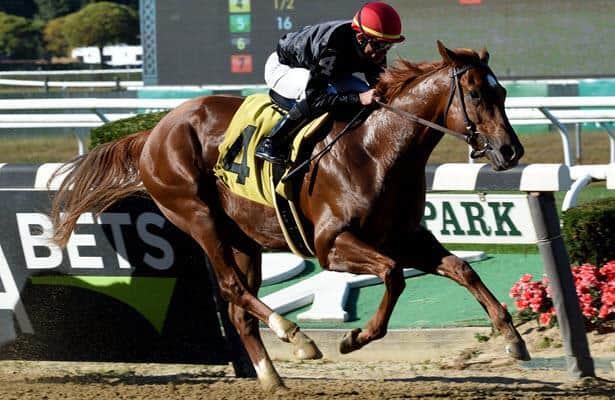 The 4-year-old colt Perfomer completed a comeback from an 11 month layoff with a convincing allowance win at Belmont Park on Saturday to record his fifth consecutive victory. The son of Speightstown, who is trained by Hall of Famer Shug McGaughey, was bred by Phipps Stable and races in conjunction with Claiborne Farm.

Performer had last run in November when he won the Discovery (G3) at Aqueduct against a field that included the 2019 Jim Dandy winner Tax. A minor ankle issue after that win, along with COVID-19 track closures, lengthened his layoff.

“He had been training well. It’d been a stop, go, and stop year. He was going to run in the Carter on Wood Memorial Day in June,” explained McGaughey. “Then we had to stop with him to take care of some things.”

Performer broke alertly in the one-turn mile on a muddy and harrowed track and was settled in third on the rail by regular rider Joel Rosario. Rosario waited confidently and easily moved Performer to the lead by the quarter pole before drawing off to win by two-lengths. Performer completed the trip in a quick time of 1:33.93 while being geared down in the final 100 yards.

“I was very very pleased with what I saw," McGaughey said. "He came back and ran his race today.”

PERFORMER gets a solid 4YO debut in the 3rd with Joel Rosario for Shug McGaughey #BelmontPark pic.twitter.com/5ebcZbPgZa

Now a start in the Cigar Mile (G1) on Dec. 5 at Aqueduct is a distinct possibility for Performer, who improves to five wins and a third from six career races.

“If he comes back out of this race good, that was sort of what our plans are,” said McGaughey. “With everything being equal hopefully we can have a 5-year-old year with him. Starting the year that really wasn’t our plan but we got curtailed with the Covid, now that’s a good possibility.”

How many races will be on Tapeta for '21-22 Gulfstream meet?
Gulfstream Park could have nearly a third of its r...
x close