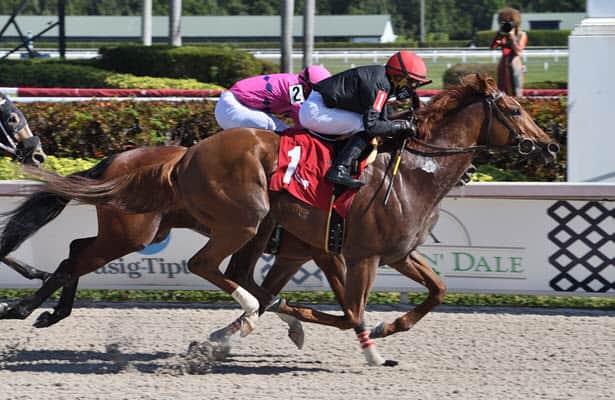 Trained by Hall of Famer Shug McGaughey, the 5-year-old son of Speightstown is slated to top a field of seven older horses in the one-turn mile event on Saturday’s 14-race program with nine stakes, headlined by the $300,000 Fountain of Youth (G2).

Joel Rosario worked out a winning trip aboard Performer after breaking from the rail post position in the Hooper, also run at a one-turn mile. Pinned down on the rail along the backstretch, Performer was swung to the outside on the turn into the homestretch and out-battled Eye of a Jedi to the wire to win by a neck.

“He gutted it out pretty good,” McGaughey said. “He was down on the inside. Joel looked up and saw those horses on the lead were going easy, so that’s when he eased him to the outside. I don’t think it killed him to win, but that horse that finished second is a pretty darn horse.”

The Hooper was Performer’s sixth victory in eight career starts.

“He seems to have come out of the race good. He had a very good work the other day,” McGaughey said.

After finishing third in his November 2018 debut, the Phipps Stable’s homebred won five races in a row, including the 1 1/8-mile Discovery (G3) at Aqueduct. His streak was broken with a third-place finish over a sealed sloppy track in the Dec. 5 Cigar Mile (G1) at Aqueduct before getting back to winning form in the Hooper.

Performer has demonstrated the versatility to win at distances from 6 ½ furlongs to 1 1/8 miles, but McGaughey favors the longer distances for the Kentucky-bred.

Jose Ortiz, who will ride McGaughey-trained Greatest Honour in the Fountain of Youth, is scheduled to ride Performer for the first time Saturday.

R. A. Hill Stable, Reeves Thoroughbred Racing and Hugh Lynch’s Tax is scheduled to return to action in the Gulfstream Park Mile after finishing 10th in the $3 million Pegasus World Cup International (G1) Jan. 23 at Gulfstream.

The Danny Gargan-trained 5-year-old gelding previously captured the Harlan’s Holiday (G3) by 4 ½ lengths at Gulfstream in his previous start.

Junior Alvarado has the call aboard the son of Arch.

Trainer Steve Budhoo’s Eye of a Jedi, an ultra-consistent 6-year-old gelding who seems to be getting better with age, will seek to turn the tables on Performer. The son of Eye of the Leopard had finished a late-closing second behind Tax in the Harlan’s Holiday prior to his narrow loss to Performer.

Marcos Meneses has the return mount aboard Eye of a Jedi.

Gelfenstein Farm LLC’s Avant Garde, who has won six of eight starts since being claimed for $10,000, is set for a return in the Gulfstream Mile after closing from last to finish third, 1 ½ lengths behind Eye of a Jedi, in the Hooper. Trainer Gustavo Delgado is also scheduled to saddle Gelfenstein Farm’s homebred Summer Kid, a 4-year-old son of Lemon Drop Kid who is coming off a victory in a first-level optional claiming allowance at Gulfstream.

Hall of Famer Javier Castellano will ride the son of Tonalist for the first time, while Edgard Zayas has the return call on Summer Kid.

WinStar Farm and China Horse Club International’s Fearless is scheduled to make his first start since finishing sixth in the June 20 Stephen Foster (G2) at Churchill Downs. The 5-year-old Ghostzapper gelding launched his career with two straight victories during the 2019-2020 Championship Meet.

Phat Man, who finished second in last year’s Gulfstream Mile, is set for a return Saturday for owners Marianne Stribling, Force Five Racing LLC and Two River’s Racing Stable LLC. The Kent Sweezey-trained 7-year-old gelding finished an even fifth in the Hooper after checking in third in the Harlan’s Holiday.

Paco Lopez is scheduled to ride Phat Man for the first time Saturday.

Daniel Alonso’s Wind of Change, a Brazilian import who finished a distant fourth in the Gulfstream Park Sprint (G3) last time out, rounds out the field.