Letruska back at site of biggest win for Gulfstream's Added Elegance 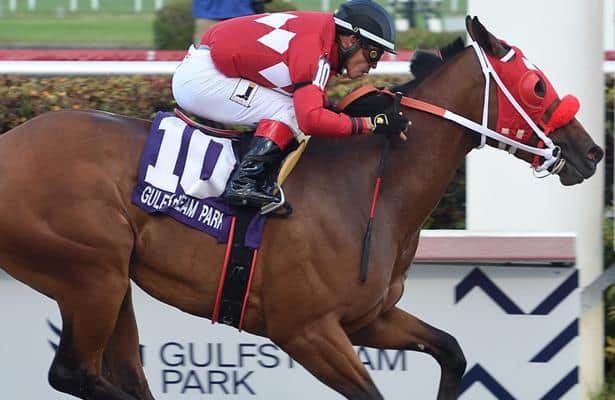 St. George Stable LLC’s Letruska is set to make her return to Gulfstream Park’s main track for the first time since outrunning older males during a 4 1/4-length romp at the demanding 1 1/4-mile distance last December.

The 4-year-old daughter of Super Saver, who remained undefeated in seven career starts in the Copa Invitacional del Caribe on the Dec. 8 Clasico Internacional del Caribe program, is scheduled to clash with seven other fillies and mares in Saturday’s $60,000 Added Elegance at Gulfstream.

First race post for Saturday’s 12-race program is noon. Six of the dozen races are scheduled for the turf, with four scheduled as part of the Rainbow 6 along with the Added Elegance.

Trainer Fausto Gutierrez had nominated Letruska to the June 11 Coaltown, an overnight handicap for 3-year-olds and up that attracted Grade 1 runners Math Wizard and Diamond Oops, but opted to wait for Saturday’s mile overnight stakes for fillies and mares.

“She has worked very good. She’s been very relaxed,” said Gutierrez, whose stable is based at Palm Meadows, Gulfstream Park’s satellite training facility in Palm Beach County. “I tried to run her two times, once against the boys, but in the end, I decided to wait because this race was very near. I think this is the perfect race for her.”

Although Letruska had already proven herself against males in the Copa Invitacional del Caribe, she was in receipt of a five-pound weight allowance as a 3-year-old and an eight-pound allowance as a filly.

“The last time [she ran against males] she got 13 pounds, it was a good handicap,” said Gutierrez, whose stable was primarily based in Mexico until this year.

Letruska sustained her first career loss in her turf debut in the Dec. 28 Tropical Park Oaks, in which she set a very keen early pace before tiring to 13th. The Kentucky-bred filly rebounded while returning to dirt and coming off a 3 1/2-month layoff to capture an April 16 allowance at Oaklawn Park.

“She was incredible off the layoff. She ran a very high [speed] figure. She ran against very nice competition, fillies who have run in stakes,” Gutierrez said.

Letruska set a solid early pace and drew away to a 2 1/4-length victory in the 1 1/16-mile allowance in which the runner-up was Todd Pletcher-trained Nonna Madeline, a multiple graded stakes-placed filly who is also entered in Saturday’s Added Elegance.

Letruska came back to sustain her first career loss on dirt April 30 at Oaklawn, tiring to third after setting a pressured pace in a mile allowance won by multiple graded-stakes winner Blamed.

“The second time she ran at Oaklawn, it was just 14 days after the first,” Gutierrez said. “It was like a stakes. Out of seven who ran, six won stakes.”

Emisael Jaramillo, who was aboard for the Copa Invitacional del Caribe victory, will be back aboard Letruska, who will carry 126 pounds, four more than Nonna Madeline, Saturday.

Teresa Viola Racing Stables and St. Elias Stable’s Nonna Madeline is set to make her first start since finishing second behind Letruska April 16. The 4-year-old daughter of Candy Ride had previously finished third in the Inside Information (G2) and fourth in the Hurricane Bertie (G3) after winning an allowance off a 14-month layoff during Gulfstream’s Championship Meet.

Edgard Zayas is slated to ride Nonna Madeline for the first time Saturday.

Ken Copenhaver’s Queen Nekia will seek to rebound from a 10th-place finish in the April 18 Apple Blossom (G1) at Oaklawn Park Saturday. The 5-year-old daughter of Harlington had previously finished third at Gulfstream in the Royal Delta (G2), beaten three-quarters of a length by victorious Cookie Dough.