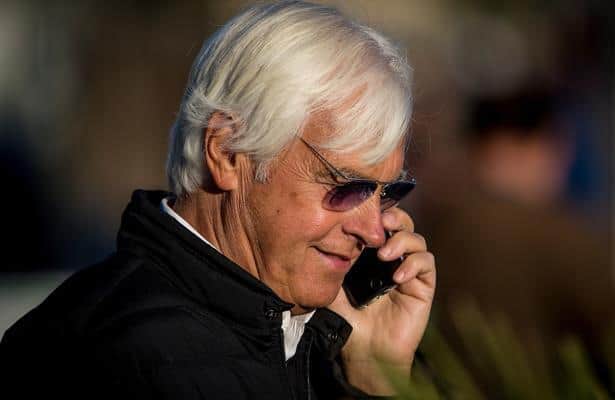 The New York Racing Association spent the second day of its hearing with trainer Bob Baffert in Manhattan trying to prove that his various medication violations could have a major impact on public perception of racing.

"When someone is so well known that even the casual racing fan can identify them, they're more likely to make an impact when some news breaks regarding that person," Camie Heleski said during her testimony.

The bulk of NYRA’s arguments against Baffert stemmed from the organization’s claim that the trainer’s various drug violations have damaged the integrity and perception of its product. To demonstrate its point, NYRA brought up Heleski, a lecturer at the University of Kentucky, to discuss social license to operate.

“Because we’re dealing with an animal that doesn’t have a voice, being really, really quick to empathize with anything related to horse welfare is going to be a big piece of that puzzle,” Heleski said.

Social license to operate is a concept stating that activities are able to occur in part because of widespread social acceptance. That acceptance can work on a spectrum, with circus elephants and greyhound racing being cited by Heleski as examples of activities that have lost their social license.

Heleski said that in her opinion, Baffert’s medication issues were worse for racing than those of lesser-known trainers because of his celebrity. She cited social media debate, various news stories, and Baffert being lampooned on the television show Saturday Night Live as examples of the trainer hurting public perception.

Baffert attorney Craig Robertson pushed back on the assertion during his cross examination, suggesting the embattled trainer has been good for racing throughout his career. Robertson specifically noted that Baffert was named the 2015 March of Dimes sportsman of the year and said he had made donations to aftercare organizations.

“That’s not Mr. Baffert’s fault, is it? That the general public doesn’t know the difference between a therapeutic race-day medication and doping?” Robertson asked Heleski, who acknowledged her agreement.

NYRA also brought up Jeff Cannizzo, the organization’s senior director of government affairs. Cannizzo described the pressure NYRA faces from government entities, describing the organization as one of the most regulated in the state of New York.

Cannizzo said he hears from regulators when negative news is circulated about horse racing.

“When I have these meeting with the Senate and Assembly and members of the governor’s office, if there’s something in the media, they’re paying attention,” Cannizzo said.

Earlier in the day, Rick Goodell, the New York State Gaming Commission’s attorney until early 2020, finished testimony that began on Monday. Pierre-Louis Toutain, past president of the European Association for Veterinary Pharmacology and Toxicology, testified remotely from France.

While being questioned by NYRA attorney Henry Greenberg, Toutain said the amounts of medications detected in some of Baffert’s positive cases, including Medina Spirit’s Kentucky Derby betamethasone case, would have impacted performance.

“Yes,” Toutain said when asked whether the 21 picograms per milliliter of betamethasone found in Medina Spirit’s blood would have affected him. “Definitively.”

Toutain made it clear that he was referring to injected betamethasone. Baffert and his team have claimed the failed test was the result of a topical cream containing the corticosteroid. Toutain said earlier in the hearing that the level of betamethasone would have some systemic effect, not only at the joint injected.

The late Medina Spirit’s positive test for betamethasone after winning the 2021 Derby sparked the series of events that led to the hearing.

The hearing, which is expected to take most of the week, was held before retired New York State Supreme Court justice O. Peter Sherwood. It will continue on Wednesday.

At the end of the hearing, Sherwood will assemble a report with his findings, which a panel will review before making a final ruling.