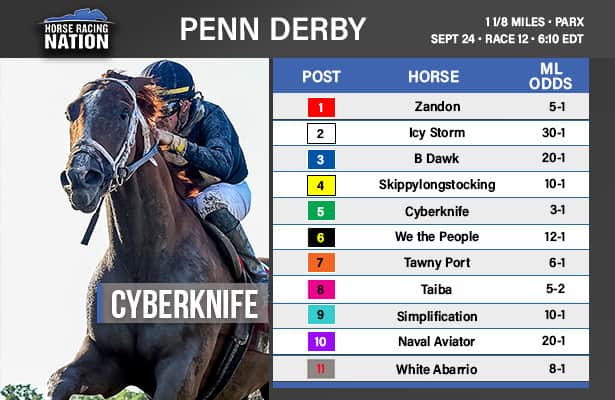 Hall of Fame trainer Bob Baffert will look to win the Grade 1, $1 million Pennsylvania Derby for a record fourth time Saturday when Zedan Racing Stables’ Taiba leads a top field of 11 3-year-olds in the signature event of the season at Parx Racing.

See who will lead the way with the Pace Report

Taiba, a son of Gun Runner, was installed as the 5-2 morning-line favorite by Parx racing secretary David Osojnak. Taiba finished second in the $1 million Haskell Stakes (G1) at Monmouth Park. He was defeated by Gold Square’s Cyberknife, who is trained by Brad Cox and also is entered in the Pennsylvania Derby.

Cyberknife won the Haskell by a head. He finished second last time out in the $1.25 million, Travers (G1) at Saratoga. The son of Gun Runner is the 3-1 second choice on the morning line and the only member of the field with two Grade 1 wins.

Taiba, who will be ridden by Hall of Famer Mike Smith, has won two of four starts in his career, all of them this year. Included in his resume is a win in the Santa Anita Derby (G1). Baffert won the Pennsylvania Derby in 2014 (Bayern), 2017 (West Coast) and 2018 (McKinzie).