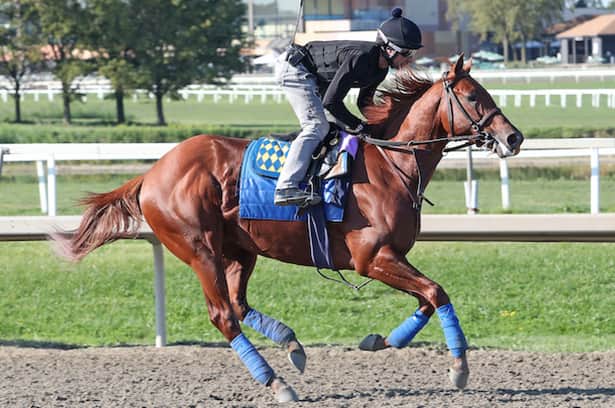 Eleven 3-year-olds get the chance to make a statement Saturday on the road to the Breeders’ Cup Classic.

Taiba is the 5-2 morning-line favorite for the Grade 1, $1 million Pennsylvania Derby. Post time from Parx is 6:10 p.m. EDT, with FanDuel TV broadcasting the 1 1/8-mile race for 3-year-olds.

The Pennsylvania Derby and the $1 million Cotillion Stakes (G1) for 3-year-old fillies headline Saturday’s slate at Parx. Ten stakes events are scheduled at the Bensalem, Pa., track, including five that are graded.

Trainer Steve Asmussen is working Travers Stakes (G1) winner Epicenter up to the Breeders’ Cup Classic on Nov. 5 at Keeneland. At 5-1, he was the shortest price among 3-year-olds listed Sunday in futures for that event.

Pennsylvania Derby starters Cyberknife and Taiba were both listed at 16-1 for the Breeders’ Cup Classic. Either of them could improve their standing toward the World Championships with a win Saturday, while some of their lesser heralded rivals could emerge onto the Classic scene.

Taiba is the morning-line favorite for the Pennsylvania Derby despite finishing second to Cyberknife (3-1) on July 23 in the Haskell Stakes (G1) at Monmouth Park. The lightly raced Santa Anita Derby (G1) hero makes only the fifth start of his career Saturday.

The Gun Runner colt’s trainer, Bob Baffert, has won the Pennsylvania Derby three times since 2014 and aims for a fourth score in the race. Taiba jockey Mike Smith was aboard two of those winners, McKinzie (2018) and West Coast (2017).

Cyberknife followed his Haskell victory with a runner-up effort Aug. 27 at Saratoga behind Epicenter in the Travers. The Brad Cox trainee can become a three-time Grade 1 winner Saturday, having also won the Arkansas Derby (G1) in April at Oaklawn Park.

Zandon (5-1) crossed third in the Travers, only a nose shy of runner-up Cyberknife. Trained by Chad Brown, he won Keeneland’s Blue Grass Stakes (G1) in April.

Here is a look at the field for the 2022 Pennsylvania Derby (trainer and jockey in parentheses) with morning-line odds:

Laurie Ross and Ashley Tamulonis go head-to-head handicapping the Pennsylvania Derby, with each picking a different Grade 1 winner atop their tickets.

When asked whether Taiba reminds him of any other horse he has trained, Bob Baffert did not hesitate in saying Silver Charm, who won the 1997 Kentucky Derby and Preakness for him.

Brad Cox admitted he was not sure how Cyberknife and Tawny Port will like – or not like – the main track at Parx Racing, where they will run for the first time Saturday in the Pennsylvania Derby. Cox talks more about the duo this week on the Ron Flatter Racing Pod.

The Pennsylvania Derby looks like an attractive race for bettors with a high-quality field, a range of racing styles and what appears to be real value on the face of it. Ron Flatter balances that excitement against Parx’s high takeout rates.

Here is a look at other graded stakes taking place Saturday at Parx and elsewhere across the U.S. All post times are EDT.

Kalifornia Queen (6-5), a Group 2 winner in Germany, aims for her first graded score in North America while making her first start of 2022. Jockey Manny Franco will climb aboard the 5-year-old Lope de Vega mare, who finished third-place Oct. 17 at Woodbine in the E.P. Taylor Stakes (G1) for trainer Chad Brown. Brown also trains Love And Thunder (5-2), third-place runner Aug. 7 at Saratoga in the De La Rose Stakes. In a Hurry (5-2) wheels back off an All Along Stakes win Sept. 10 at Pimlico for trainer Shug McGaughey.

Related: Chad Brown has 2 top contenders in Athenia at Aqueduct

Fearless (6-5) has won back-to-back starts at marathon distances for trainer Todd Pletcher, including the Birdstone Stakes on July 28 at Saratoga and the Brooklyn Stakes (G2) in June at Belmont Park. Jockey Luis Saez will be up on the 6-year-old Ghostzapper gelding. Jamie Ness trains 2021 Greenwood Cup victor Magic Michael (4-1), who finished second Aug. 24 at Delaware Park in an allowance race. The Reds (5-1) exits an Aug. 19 allowance win at Saratoga for trainer Saffie Joseph Jr.

Provocateur (4-1) finished third in June in Belmont’s Woody Stephens Stakes (G1), then won the Jersey Shore Stakes on Aug. 6 at Monmouth. Jockey Irad Ortiz Jr. will pilot the Into Mischief colt for Pletcher. Wesley Ward trains Nakatomi (9-2), a stakes winner who won his 2022 bow June 26 in a Churchill Downs allowance race. Scaramouche (5-1) won a Parx stakes event in March and has taken two straight races there at the allowance level, including Aug. 23 in his most recent start for trainer Guadalupe Preciado.

Secret Oath (2-1) seeks her first victory since delivering trainer D. Wayne Lukas his fifth Kentucky Oaks triumph in May at Churchill. Saez will get a leg up on the Arrogate filly, who ran second Aug. 20 at Saratoga in the Alabama Stakes (G1). Bob Baffert trains Adare Manor (7-2), a Grade 3 heroine who crossed second May 20 at Pimlico in the George E. Mitchell Black-Eyed Susan Stakes (G2). Goddess of Fire (5-1) finished third in the Alabama for Pletcher behind stablemate Nest and Secret Oath.

Echo Zulu (1-1), the champion juvenile filly of 2021, starts for the first time since scratching before the Acorn Stakes (G1) on June 11 at Belmont. Jockey Ricardo Santana Jr. will be aboard the Steve Asmussen-trained Gun Runner filly, a three-time Grade 1 winner who crossed fourth in the Kentucky Oaks. Asmussen also trains Wicked Halo (7-2), whose three straight wins include the Prioress Stakes (G2) on Sept. 2 at Saratoga. Tarabi (4-1), who has twice hit the board in Echo Zulu’s Grade 1 wins, took the Wilton Stakes on July 14 at Saratoga.