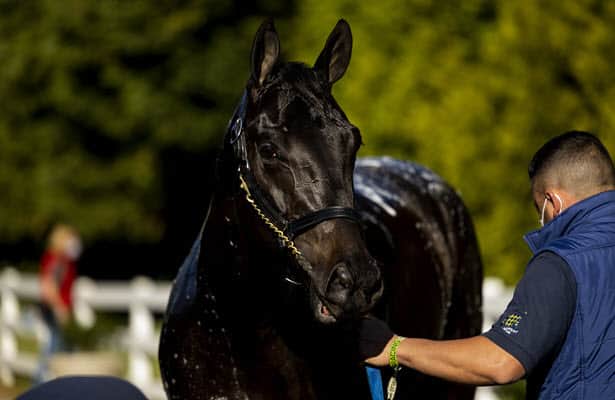 The $1 million, Grade 1 Pennsylvania Derby drew a field of 10 3-year-olds who will contest the 1 1/8-mile signature race at Parx Racing on Saturday.

In recent years, the Penn Derby has produced a pair of division champions and a Breeders’ Cup Classic winner. Eclipse Awards for the top 3-year-old male went to Will Take Charge in 2013 and West Coast in 2017. In 2014, Bayern went from his track-record-setting performance in the Penn Derby to victory in the BC Classic.

Other recent prominent winners were McKinzie in 2018 and Frosted in 2015. The race was not run in 2020 because of the COVID pandemic.

Here is a full-field analysis for the 2021 Pennsylvania Derby, which is slated as race 12, with morning-line odds from Horse Racing Nation. Post time is scheduled for 5:49 p.m. ET.

1. Fulsome (10-1 – Into Mischief – Brad Cox / Florent Geroux – 9: 5-1-1 - $582,024) Fulsome will represent the barn of Brad Cox, with his top-ranked 3-year-old Essential Quality pointed to the Breeders’ Cup Classic. Quietly, Fulsome has put together an impressive sophomore campaign with 5 wins from 7 starts including three stakes wins. This Juddmonte home-bred won the Smarty Jones (G3) at Parx last month, which is the local prep race for the Pennsylvania Derby. This late runner was a heavy favorite in his last four starts at different tracks. He will make his first start in a Grade 1. Use underneath.

2. Keepmeinmind (12-1 – Laoban – Robertino Diodoro / Joel Rosario – 11: 1-3-2 - $739,987) You can add a fourth-place finish in the Travers (G1) to the record of Keepmeinmind, who has earned more than $739,000 with only one victory in 11 starts. By now, we all know the story of this guy who has raced exclusively in graded stakes this year, picking up sizable checks with his late rally. He cannot be considered a win contender, but could he once again pick up a check? For me he has had too many tries and others deserve more consideration. Toss.

3. Speaker’s Corner (12-1 – Street Sense – Bill Mott / Jose Ortiz – 3: 2-0-1 - $99,940) Though lightly raced with only three starts, Speaker’s Corner was highly regarded since being the odds-on favorite in his debut at Saratoga in 2020. He broke his maiden against a noteworthy field at Belmont Park but then missed the Kentucky Derby trail and the Triple Crown. Bill Mott took his time getting the Godolphin homebred back to the races and when he did, Speaker’s Corner romped in an allowance at the Spa this summer. This son of Street Sense is certain to become a stakes winner, but this is a formidable field loaded with graded-stakes winners and talent. Though unlikely to become a Grade 1 winner at first asking, a top three finish is not out of the question since he will get a positive pace scenario. Live long shot.

4. Weyburn (20-1 – Pioneerof the Nile – Jimmy Jerkens / Paco Lopez – 7: 2-2-0 - $343,520) There are lots of layoff lines in the past performances of Weyburn, and now he will return after running fourth in the Jim Dandy (G2) on July 31. He broke his maiden in December at Aqueduct and then waited three months to win again in the Gotham (G3). There were three races since then without another victory and plenty of changes in plans by Jimmy Jerkens. The Ontario-bred did not make it to the Queen’s Plate, which had been a primary goal. I would need long odds to consider using Weyburn and, even then, he might not be not fast enough to keep up with the quality front runners in this field. Unpredictable.

5. I Am Redeemed (20-1 – Redeemed – Penny Pearce / Abner Adamo – 4: 3-1-0 - $112,200) I Am Redeemed will be racing out of his own stall, and this Pennsylvania-bred has three wins against state-breds from his four career starts, all at Parx. His only loss came in his second start in an open-company allowance race. Toss.

7. Hot Rod Charlie (3-1 – Oxbow – Doug O’Neill / Flavien Prat – 10: 2-2-3 - $1,598,200) Hot Rod Charlie is back after getting disqualified from first in the Haskell. Since breaking his maiden at Santa Anita almost a year ago, he has raced only in graded stakes company and never finished worse than third. During that span, Hot Rod Charlie earned $1.5 million while finding bad luck here and there. He is once again in a very strong field of 3-year-olds, and this group is loaded with horses that prefer to be part of the early pace. You cannot deny that his Doug O’Neill runner is battle tested. Win contender.

8. Midnight Bourbon (7-2 – Tiznow – Steve Asmussen / Ricardo Santana Jr. – 11: 2-4-3 - $903,920) In the Travers (G1), Midnight Bourbon set the pace and battled down the stretch with a performance that should have won the Midsummer Derby except for the presence of the best 3-year-old in the country, Essential Quality. Trainer Steve Asmussen keeps getting more and more from this son of Tiznow, but Midnight Bourbon has not been able to get a Grade 1 win. It is now six races since his last victory in January and that includes his last four in Grade 1s – the Kentucky Derby, the Preakness, the Haskell and the Travers. Now, Midnight Bourbon lands in this speed-filled field of stellar 3-year-olds. No doubt that he will be part of the pace and will battle down the stretch. Win contender.

9. Medina Spirit (5-2 – Protonico – Bob Baffert / John Velazquez – 8: 4-3-1 - $2,345,200) The most discussed horse of 2021 because of his controversial victory in Kentucky Derby, returned to the races after his third-place finish in the Preakness to win the Shared Belief at Del Mar. Trainer Bob Baffert won the Pennsylvania Derby three times since 2014 with Bayern, West Coast and McKinzie. In his seven-race career, Medina Spirit never finished worse than third, and that happened only once. His best results came when he we went to the lead right out of the gate. The outside post-position draw should help him do just that. The one to beat.

10. Americanrevolution (12-1 – Constitution – Todd Pletcher / Luis Saez – 4: 3-0-0 - $271,535) This New York-bred is on a three-race winning streak, with all those victories coming against state-breds. Those wins include a maiden score in June at Belmont Park followed by stakes wins at Finger Lakes and most recently at Saratoga. He was an odds-on favorite in the last two races, which resulted in open-length victories. Interestingly, this son of Constitution was a $275,000 yearling purchase and is owned by the high-profile partnership of China Horse Club and WinStar Farm. This is an enormous step-up in class. Toss.

Summary: The top win contenders in the Pennsylvania Derby – Hot Rod Charlie, Medina Spirit and Midnight Bourbon – are fast horses that do their best work when they are on the lead or pressing the pace. The Parx track is frequently a deep and tiring surface, so does that mean the race will collapse and that one of the late runners will upset the race?

Fulsome and Speaker’s Corner are the best late runners in this field and have a chance to get a top three finish.

Bob Baffert runners seem to run extremely well at Parx, and Medina Spirit got an ideal post-position draw with the other speed horses to his inside. Hot Rod Charlie and Midnight Bourbon are worthy contenders, but I can’t come up with any compelling reasons why they will get a victory in this tough field after so many prior close calls.

Medina Spirit is the top choice and long shots Fulsome and Speaker’s Corner have a chance to rally late to add betting interest to the trifecta.