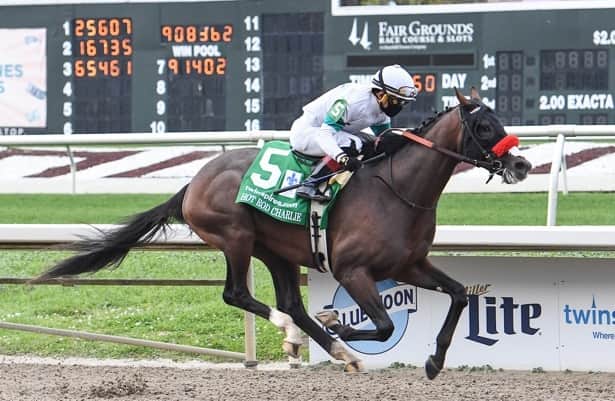 A colt who has gamely fought the best of his crop over the last year aims Saturday for the first Grade 1 win of his career.

Hot Rod Charlie (5-2) is the shortest price left on the morning line for the Grade 1, $1 million Pennsylvania Derby at Parx. He and seven other 3-year-olds will go postward at 5:49 p.m. EDT, with FS2 and TVG both broadcasting the 1 1/8-mile race.

Trained by Doug O’Neill, Hot Rod Charlie races Saturday for the first time since crossing first in July’s Haskell Stakes (G1). Monmouth Park stewards ruled that he interfered with rival Midnight Bourbon, and he was disqualified to seventh.

Midnight Bourbon (5-1) is another reliable board hitter in high-profile stakes, running second in both the Preakness and Travers (G1). He also seeks a Grade 1 breakthrough at Parx for trainer Steve Asmussen.

The Pennsylvania Derby field lost its 2-1 morning-line favorite Tuesday when trainer Bob Baffert announced Medina Spirit would stay home in California. The 2021 Kentucky Derby winner drew post No. 9 of 10, which Baffert said was too far outside for his liking.

Medina Spirit will instead point to the $300,000 Awesome Again Stakes (G1) next Saturday at Santa Anita.

Saturday’s Pennsylvania Derby will also go off without Grade 2 winner Keepmeinmind. Trainer Robertino Diodoro told Horse Racing Nation on Friday the colt will be scratched due to an abscess in his front-left foot.

Here is a look at the 2021 Pennsylvania Derby field (trainer and jockey in parentheses) with morning line odds:

HRN staffers and contributors made their expert Pennsylvania Derby picks and could not come to a consensus on who to bet.

Reinier Macatangay identifies three Pennsylvania Derby starters to use, including long shots who could pick up the pieces in the event of a pace duel.

If ever a horse is due a Grade 1 victory, Brian Zipse argues it is Hot Rod Charlie.

The Pennsylvania Derby is among races that are part of Saturday’s Cross Country Pick 5 sequence.

Here is a look at stakes on the Pennsylvania Derby undercard, plus graded races taking place Saturday across North America. All post times are EDT.

Chub Wagon (8-5) brings a 10: 9-1-0 record into this event for state-bred females. The 4-year-old Hey Chub filly has won five stakes races in 2021, including the Skipat on the Preakness undercard in May at Pimlico. Jockey Jomar Torres rides for trainer Guadalupe Preciado. Brad Cox trains Vault (5-2), who made the grade in May at Belmont Park in the Ruffian Stakes (G2).

Life Is Good (1-9) towers over a short field of five for trainer Todd Pletcher. The 3-year-old Into Mischief colt is 3-for-4 lifetime, including a win for former trainer Bob Baffert in Santa Anita’s San Felipe Stakes (G2). Jockey Irad Ortiz Jr. takes over the mount after Life Is Good finished second last month at Saratoga under Mike Smith in the H. Allen Jerkens Memorial Stakes (G1). Chance It (4-1) is a three-time stakes winner for trainer Saffie Joseph Jr. and ran third last out at the Spa in the Forego Stakes (G1).

Silver State (8-5) preps for the Breeders’ Cup here after his six-race winning streak was snapped last month at Saratoga, where he was third in the Whitney Stakes (G2). The Steve Asmussen trainee previously won the Oaklawn Handicap (G2) and Belmont’s Metropolitan Handicap (G1). Jockey Ricardo Santana Jr. retains the mount on the 4-year-old Hard Spun colt. The Pletcher-trained Mind Control (4-1) clinched a Breeders’ Cup Sprint berth in July with a John A. Nerud Stakes (G2) score at Belmont.

Moretti (2-1) returns to the main track after trying turf last month at Saratoga, where he was seventh in the Sword Dancer Stakes (G1). Pletcher trains the 5-year-old son of Medaglia d’Oro, who has been a familiar face in these marathon-distance events. Jockey Luis Saez has won graded stakes races in eight states during 2021 and looks to make Pennsylvania the ninth. Magic Michael (9-2) won three straight allowance events at Parx earlier this season for trainer Jamie Ness.

Caravel (9-5) looks for a second Grade 3 score of the season after also taking Saratoga’s Caress Stakes in July. Graham Motion trains the 4-year-old Mizzen Mast filly, who tried Grade 1 company last out at Woodbine, running third in the Highlander Stakes. Jockey Jose Ortiz gets the call. Firecrow (7-2) won the Jim McKay Turf Sprint Stakes on the Preakness undercard for trainer Ron Moquett and returns here off a four-month layoff.

Jackie’s Warrior (4-5) looms over the field here off back-to-back Saratoga stakes wins in the Amsterdam (G2) and Jerkens Memorial. The Maclean’s Music colt sports a 10: 7-1-1 record for Asmussen and seeks the seventh graded stakes score of his career. His jockey Joel Rosario won the last running of this event in 2019 aboard King Jack. Real Talk (5-1) enters off a Monmouth Park stakes win for trainer Carlos David and steps into graded flight for the first time.

Related: How to play Gallant Bob with odds-on Jackie's Warrior

Carribean Caper (1-1) puts a 4-for-4 record on the line in her graded stakes debut for trainer Al Stall Jr. The Speightstown filly was a stakes winner at this distance last month at Ellis Park in the Audubon Oaks. Jockey Colby Hernandez gets the call Saturday. Li’l Tootsie (3-1) won an allowance race over this Churchill track in May for trainer Tom Amoss and was third last out at Saratoga in the Prioress Stakes (G2).

Clairiere (2-1) has knocked heads all season against her division’s best distaffers and looks here for a Grade 1 breakthrough of her own. The Curlin filly won Fair Grounds’ Rachel Alexandra Stakes (G2) in February and is 0-for-5 since but was runner-up last out in Saratoga’s Alabama Stakes (G1). Santana rides the favorite for Asmussen. Army Wife (7-2) won Pimlico’s George E. Mitchell Black-Eyed Susan Stakes (G2) in May for trainer Mike Maker and was a half-length shy of Clairiere for second in the Alabama.

Pink Lloyd (4-5) counts the 2020 Bold Venture among his 26 career victories and aims here for the whopping 24th stakes triumph of his career. Robert Tiller trains the 9-year-old Old Forester gelding, who was runner-up in both his prior 2021 starts. Jockey Rafael Hernandez will pilot the Sovereign Award 2017 Horse of the Year. Lucky Curlin (2-1) made his seasonal debut last month in a local allowance race, finishing second for trainer Mark Casse.

Pocket Square (3-5), a Group 3 winner in Europe, aims for her first graded score on U.S. soil for trainer Chad Brown. The 4-year-old Night of Thunder filly was fifth in Saratoga’s Diana Stakes (G1) but finished the Spa’s 2021 meet last month with an allowance victory. Ortiz Jr. gets the call. Brown also conditions Miss Teheran (9-5), another Saratoga allowance winner who was second last out in a stakes race at Monmouth Park.

Wait for It (7-2) has won stakes races this year at both Parx and Presque Isle Downs. Edward Coletti Jr. trains the 6-year-old Uptowncharlybrown gelding, who has spent nearly all his 31-race career competing in the Mid-Atlantic. Jockey Anthony Nunez rides Saturday. You Must Chill (9-2) won a Penn National allowance race in his last start and steps into stakes company here for Ness.