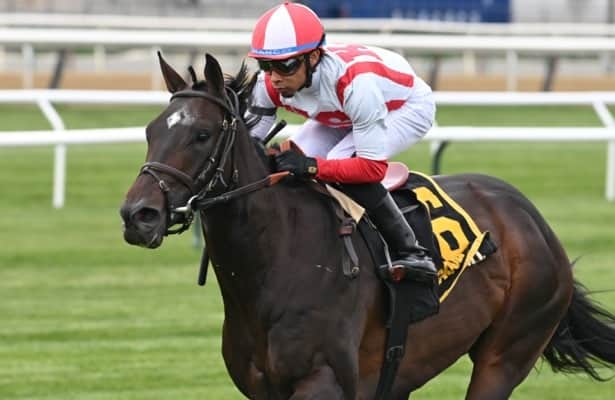 One week before 3-year-olds end the 2022 Triple Crown series with the Belmont Stakes, their fellow sophomores will prep for seven-figure summer targets with a Saturday turf feature.

Trainer Chad Brown holds a strong hand Saturday in the Pennine Ridge with both Unanimous Consent and stablemate Napoleonic War (3-1).

Unanimous Consent is off to a 3-for-3 start in his career, including a win in the Woodhaven Stakes on April 23 at Aqueduct. Klaravich Stables, owner of Preakness Stakes hero Early Voting, campaigns the Almanzor colt, who will have jockey Manny Franco up.

Napoleonic War is 2-for-3, also looking to make the grade Saturday for another of Brown’s top owners, Peter Brant. He enters off a Belmont allowance victory May 5.

Emmanuel (5-2) was last seen running third at Keeneland on April 9 in the Blue Grass Stakes (G1) behind Zandon and Smile Happy. Trainer Todd Pletcher has elected to try the former Kentucky Derby trail runner on the grass.

Here is a look at the field for the 2022 Pennine Ridge Stakes (trainer and jockey in parentheses) with morning-line odds:

TimeformUS’ pace projections show Emmanuel going out to the lead under jockey Irad Ortiz Jr. Favorite Unanimous Consent is projected to settle in third place during the early stages.

Here is a look at other stakes races of note taking place Saturday across North America. All post times are EDT.

McKulick (7-5) aims to do one better Saturday off a runner-up showing May 6 at Churchill Downs on the Kentucky Oaks undercard in the Edgewood Stakes (G2). Jockey Tyler Gaffalione will be up on the Frankel filly for trainer Chad Brown. Todd Pletcher trains Beside Herself (2-1), who steps up off an April 28 allowance victory at Keeneland. Stakes winner Candy Raid (4-1) switches surfaces after a ninth-place finish in the Kentucky Oaks for trainer Keith Desormeaux.

Pauline’s Pearl (3-5) returns after she became a Grade 1 winner on the Kentucky Oaks card, getting the best of rival Shedaresthedevil in the La Troienne Stakes. Trainer Steve Asmussen will give a leg up to jockey Luis Saez on the 4-year-old Tapit filly. Robertino Diodoro trains Ava’s Grace (7-2), who finished third in the La Troienne. Army Wife (9-2) is a Grade 2 victor for trainer Mike Maker who makes her first start since running fourth Nov. 25 at Churchill in the Falls City Stakes (G2).

Field Pass (5-2), another Grade 2 winner for Maker, aims for the sixth graded score of his career in this event that formerly ran at the now-defunct, Churchill-owned Arlington Park. Jockey Ricardo Santana Jr. will get a leg up on the 5-year-old son of Lemon Drop Kid, third-place runner April 23 at Laurel Park in the Henry S. Clark Stakes. Brian Lynch trains Admission Office (3-1), a Grade 3 victor who returns off a layoff of more than 15 months, dating to a sixth-place finish Feb. 27, 2021, at Gulfstream Park in the Mac Diarmada Stakes (G2). Grade 2 hero Get Smokin (3-1) returns to U.S. soil for trainer Mark Casse after crossing 16th on March 26 at Meydan in the Al Quoz Sprint (G1).

Becca Taylor (4-5) brings a 7-for-8 lifetime record into this spot as she makes her graded-stakes debut. Steven Miyadi trains and Juan Hernandez rides the 4-year-old Old Topper filly, last-out allowance winner May 7 at Golden Gate. Mark Glatt trains Dance to the Music (2-1), who also exits a May 7 allowance win, hers coming at Santa Anita. Samurai Charm (3-1) makes her first start since settling for sixth Oct. 3 in the local Zenyatta Stakes (G2).

Bob’s Edge (3-1), winner of Oaklawn Park’s Whitmore Stakes (G3) in March, runs off a fourth-place effort over the same course April 16 in the Count Fleet Sprint Handicap (G3). Jockey Adam Beschizza has been tabbed by trainer Larry Jones to ride the 4-year-old Competitive Edge gelding. John Ortiz trains Top Gunner (7-2), winner of the St. Matthews Overnight Stakes on May 4 at Churchill. 2020 Kentucky Derby runner Necker Island (4-1) was fourth May 7 on the 2022 Derby card in the Knicks Go Overnight Stakes for trainer Chris Hartman.

Boardroom (2-1), twice a Grade 3 heroine, finished runner-up May 8 at Woodbine in the Whimsical Stakes (G3). Jockey Rafael Manuel Hernandez gets the call on the 5-year-old Commissioner mare for trainer Josie Carroll. Casse trains Amalfi Coast (5-2), the 2021 Royal North victor who returns off a layoff dating to a second-place run Oct. 23 in the Hendrie Stakes (G3). In Good Spirits (4-1), a Grade 3 winner, heads north of the border for trainer Al Stall Jr. after running fourth May 5 at Churchill in the Unbridled Sidney Stakes.

Americanrevolution (8-5) is the morning-line favorite for this local prep toward the $750,000 Stephen Foster (G2) on July 2. Pletcher trains and Florent Geroux rides the 4-year-old Constitution colt, making his first start since winning the Cigar Mile Handicap (G1) on Dec. 4 at Aqueduct. Shug McGaughey trains Scalding (5-2), whose four straight victories include the Ben Ali Stakes (G3) on April 23 at Keeneland. 2021 Kentucky Derby entrant Dynamic One (9-2) was runner-up in the Ben Ali for Pletcher.

Grand Sonata (7-2) won the Kitten’s Joy Stakes (G3) in February at Gulfstream, then was runner-up April 8 at Keeneland in the Transylvania Stakes (G3). Gaffalione will pilot the Medaglia d’Oro colt for Pletcher. McGaughey trains Smokin’ T (4-1), who was fourth on the Kentucky Derby card in the American Turf Stakes (G2). James Jones (9-2) broke through May 5 in a Churchill maiden race on second asking for Brown.